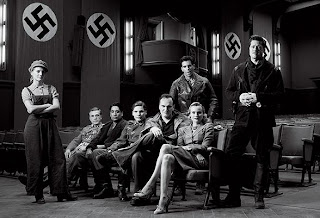 The biggest movie screened to the press last week was Quentin Tarantino's long-in-the-works Inglourious Basterds, a ripping World War II thriller that's likely to divide audiences just like all of his other films have done. I also attended the press day for the film - another sparkling flurry of chatter from Tarantino as well as the gorgeous Diane Kruger and suddenly world-famous Christoph Waltz.

And that wasn't the only Cannes favourite we saw last week. There was also Almodovar's Broken Embraces, a cleverly tight and rather low-key noir, and Michael Haneke's stunningly well-made and deeply haunting Palme d'Or winner The White Ribbon. For more mainstream audiences, we had the guilty pleasures of action-spy rodents in G-Force, Will Ferrell in a wacky film of the slightly less-wacky TV show Land of the Lost, Luc Besson-style action mayhem in the entertaining sequel District 13: Ultimatum, and classy but nutty horror in Orphan.

London critics had the best screening catering ever as Le Cordon Bleu provided outrageously delicious nibbles before (and after, via goodie bag) Julie & Julia, the two-pronged biopic starring the fantastic Meryl Streep as Julia Child. And after all of that, my favourite film of the week was an indie twist on the rom-com, (500) Days of Summer, with Joseph Gordon-Levitt and Zooey Deschanel. On the other hand, I also finally caught up with Woody Allen's only so-so Scoop. Whew! 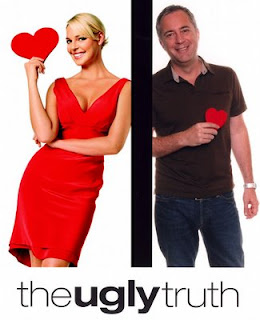 No, I'm not throwing away my wildly exciting career as a freelance film critic to star in a rom-com with Katherine Heigl. This photo comes thanks to the bright sparks at Sony, who slotted critics into the film poster while we attended the press screening of The Ugly Truth last week. Heigl and Gerard Butler are terrific on screen, but predictability was clearly not an issue to the screenwriters.

But of course the really BIG movie this week (and this summer) is the sixth part in the saga: Harry Potter and the Half-blood Prince, an oddly dark and dreary movie that feels like an intake of breath before the action really kicks off in the next episode (we hope).

Last week I also saw Terry Gilliam's The Imaginarium of Doctor Parnassus, which is as infused with imagination as the title (and director) suggests, and it's a must see for Heath Ledger's final performance, which was cleverly completed by the starry trio of Johnny Depp, Colin Farrell and Jude Law. Creation inventively tells the story of Charles Darwin's work on his world-changing book through his relationship with his wife Emma, and it's especially well-played by Paul Bettany and real-life partner Jennifer Connelly. The Informers is yet another all-star multi-strand LA drama, this time with a nihilistic 1980s theme based on a series of stories by Brett Easton Ellis. Home is an especially sharp satire about modern life starring Isabelle Huppert as the matriarch of a free-spirited family that suddenly finds its rural idyll shattered by a busy highway. And Lars Von Trier's Antichrist deserves all of the controversy it has already sparked for its dark and misogynistic look at marriage and grief.

And so it goes. This week film critics are looking forward to Harrison Ford's all-star multi-strand LA drama Crossing Over, Pedro Almodovar's Broken Embraces with Penelope Cruz, the Will Ferrell comedy-spoof remake Land of the Lost, and the guinea pig spy romp G-Force.
Posted by Rich Cline at 11:42 No comments:

Critical Week: Back in the UK 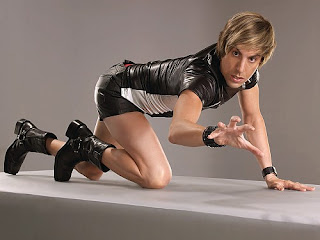 After two trips out of London in the past month (to Edinburgh and Los Angeles for film festivals and a bit of California holiday sunshine), I'm back home now and working to get my weekly screening schedule back up and running. It's always a challenge juggling communications with literally dozens of film press officers to make sure I cover as many movies as possible, and my diary is already starting to fill up.

As for the non-festival movies of the past three weeks, there have been a few stand-outs, including Michael Mann's elegantly understated Public Enemies, featuring especially vivid performances from Johnny Depp, Marion Cotillard and Bully Crudup; Bruno, featuring more hysterically biting comedy from the outrageously full-on Sacha Baron Cohen (pictured); the eye-catching new Disney-Pixar movie Up, which is literally a flight of imagination; and Woody Allen's Whatever Works, a very funny observational comedy about a grumpy genius.

In the next week I'll catch up with Harry Potter and the Half-Blood Prince (I missed the first press screening while in L.A. last week), Katherine Heigl and Gerard Butler in The Ugly Truth, Kim Basinger and Mickey Rourke in The Informers, Paul Bettany in Creation, Will Ferrell in Land of the Lost, Isabelle Huppert in Home, Lars Von Trier's Antichrist and Terry Gilliam's The Imaginarium of Dr Parnassus, aka Heath Ledger's last film.
Posted by Rich Cline at 16:53 No comments: