Critical Week: Out of the closet

That's Domhnall Gleeson emerging from a wardrobe in the time-travelling romance About Time, which was the surprise film at June's Edinburgh International Film Festival and has been screening to London press this past week. It's what you'd expect from writer-director Richard Curtis, including a terrific cast that features Rachel McAdams, Bill Nighy and Lindsay Duncan. Tilting more toward the comical end of the rom-com spectrum, Jennifer Aniston and Jason Sudeikis star in We're the Millers, a rude drug-smuggling romp that's more amusing than riotous

We also had two indie comedy-dramas: Aubrey Plaza stars in the sex-focussed coming-of-age comedy The To Do List, which is much smarter than expected; and Kristen Bell gets a more serious role than usual in The Lifeguard, as a 29-year-old who reverts to her teen life in a moment of panic, complete with her old summer job and a 16-year-old boyfriend (the superb David Lambert). Both films are strongly involving, and likely to provoke different reactions in audiences.

A little further afield, Uwantme2killhim? is a chillingly clever British thriller based on a true story about an internet-based crime; Kon-Tiki is the spectacularly photographed Oscar-nominated epic about Thor Heyerdahl's 1947 raft journey proving that Incas populated Polynesia; and Una Noche is a disarmingly engaging drama about three young Cubans planning a dangerous journey to Miami. And I also revisited one of my all-time favourites: Terry Gilliam's Time Bandits, which is getting a digitally restored release.

This coming week we catch up with the 3D doc One Direction: This Is Us just before its release. There's also Saoirse Ronan in the WWIII thriller How I Live Now, the Cannes-winning romance Blue Is the Warmest Colour, the British youth-crime comedy Borrowed Time, the British-Indian comedy Jadoo, and the restored final cut of the 1973 classic The Wicker Man.

Critical Week: Tell no one

There are a handful of films screened to London critics this past week that we're not allowed to review yet. Insidious: Chapter 2 reunites Patrick Wilson, Rose Byrne and director James Wan for more ghostly/demonic horror. Riddick reunites Vin Diesel with director David Twohy for a third instalment in the series, 13 years after Pitch Black. And The Mortal Instruments: City of Bones brings a new young-adult franchise about vampires, werewolves and demons to the big screen. That last embargo ends today, and I also attended a press conference yesterday that was much more entertaining than the film, thanks to lively stars Lily Collins, Jamie Campbell Bower, Robert Sheehan and director Harald Zwart.

There was no embargo needed for the late-in-the-day screening of the entertaining but disappointing sequel Kick-Ass 2, which features original cast members Aaron Taylor-Johnson, Chloe Grace Moretz and Christopher Mintz-Plasse with a new writer-director. Luke Evans plays a shady unnamed guy in No One Lives, a high-energy horror film that gleefully entertains fans with a series of grisly deaths.

After all of that, it was nice to have a few grown-up films: Le Week-end is a marvellously written and played drama starring Jim Broadbent, Lindsay Duncan and Jeff Goldblum. Gloria is a strongly engaging Chilean drama about a middle-aged single woman trying to find love. Call Girl is a strikingly well-made Swedish drama about political corruption and a prostitution ring. And Clio Barnard's The Selfish Giant cleverly re-interprets Oscar Wilde's story as a gritty tale of hapless tearaway kids in Yorkshire. I also revisited Rene Clement's gorgeously restored 1960 thriller Plein Soleil and Gregg Araki's rather nutty teen sci-fi comedy-drama Nowhere. Both still feel eerily contemporary.

This coming week we have Richard Curtis' About Time, Jennifer Aniston in the comedy We're the Millers, Aubrey Plaza in The To Do List, the British internet thriller Uwantme2killhim?, the Cuban adventure Una Noche and a chance to revisit Terry Gilliam's fantastic Time Bandits, restored for a re-release.
Posted by Rich Cline at 09:49 No comments:

When you're invited to a special press day in the Capitol for The Hunger Games: Catching Fire, you might be put off by a bootcamp programme that includes fashion, beauty and fitness. But there's also breakfast, lunch and afternoon tea in the schedule. And face it, you're in dire need of a day away from the computer screen. And today the Capitol is located in a swanky suite at the Soho Hotel in central London. 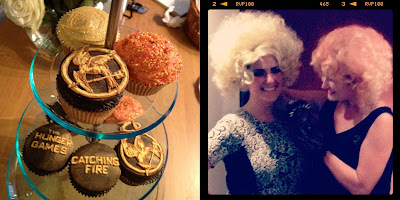 First thing you see when you walk in is a tiered tray of branded cupcakes surrounded by pastries - it's all very promising already. Cup of coffee in hand, you wander around looking for another male in the room (there are a precious few so you're not alone), then discover the Lionsgate press team Jess and Lorna dolled up like Effie with glammed-up faces, gigantic wigs and vertiginous heels. The pastries taste great until you start listening to the almost pathologically fit workout-wear designer to the stars talking about the high-tech outfits she made for the film (and for superfit clients like Madonna and Gwyneth). The brand is Lucas Hugh, and you know you could never afford any of it. But you want it anyway. 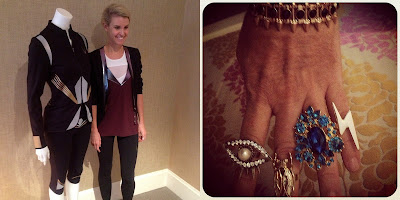 Continuing in fashion mode, you try on a range of bling and admire a range of wacky shoes and gowns in the style of Capitol City fashionistas. Nothing would ever fit you, because you're a full-sized man. And far from Effie or (wishful thinking) Finnick, you know that the Hunger Games character you most resemble is actually President Snow. The beauty section also includes a chance to have your face layered with glitter, but you pass on that because trays of lunch delicacies have arrived, and someone has replaced the looping Catching Fire trailer with the original Hunger Games movie, which we all become glued to like zombies. Because it's actually rather good. 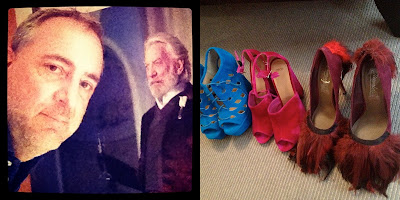 After lunch it's fitness time, and we meet strength coach James, who explains that he will be putting 12 of us through our paces in a 12-week training programme leading up to a mock Hunger Games event right before the 11th November world premiere of Catching Fire in London. You are tempted to throw your hat in the ring. Even though James (below with Lorna) is obscenely healthy, he seems like a nice guy who wouldn't hurt you too much. 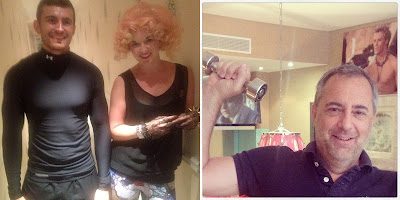 When I ask whether anyone will actually die in these mock games, everyone laughs. But I sense a sinister tone in the air, as if there's a secret plan afoot to purge the ranks of London's film critic population. Well, The Independent on Sunday has just axed its entire arts critic line-up. Doom is in the air. I'd better get training....

London-based critics had our first screening of Woody Allen's new comedy-drama Blue Jasmine, which sees him return to America after working in Europe for most of the past decade. But he's not back in New York: it's San Francisco this time, and it's one of his best scripts in years. It also features a knock-out performance from Cate Blanchett. We also caught up with Paul Rudd and Emile Hirsch in David Gordon Green's tender, endearingly offbeat comedy-drama Prince Avalanche, plus Keri Russell in the rather silly comedy Austenland, which is likely to appeal mainly to 40ish single women.

In the arthouse department, we had Cold Comes the Night, a tense, quiet and ultimately lightweight thriller with Alice Eve and Bryan Cranston. Kristin Scott Thomas once again steals the show in the French comedy-drama Looking for Hortense, but her role is secondary to Jean-Pierre Bacri in a less interesting role as a man in a muddle. Rikki Beadle-Blair's new British drama Bashment is a searing, fiercely important look at racism and homophobia in the music scene. Kuma is a fascinating, eerily urgent drama about a Turkish family in Vienna, caught in a tangled web of culture and class. And Lucy Walker's The Crash Reel is an astonishing documentary about traumatic brain injury, made much more personal as it's also the story of snowboarder Kevin Pearce.

This coming week we finally get to see Kick-Ass 2, just before it opens. And we have screenings of the next franchise-starter The Mortal Instruments: City of Bones, Jim Broadbent and Lindsay Duncan in Le Week-end, the Patrick Wilson/Rose Byrne reunion Insidious 2, Clio Barnard's acclaimed The Selfish Giant, the award-winning Chilean comedy-drama Gloria, and the Swedish prostitution epic Call Girl. I'll also get to revisit Gregg Araki's Nowhere and Rene Clement's Plein Soleil.
Posted by Rich Cline at 12:03 No comments:

Critical Week: I've got your back

Mark Wahlberg and Denzel Washington provided some muscle for British critics this week in the action-comedy 2 Guns, which surprisingly is more skilfully written, directed and acted than most of this summer's action options. A pumped-up Wahlberg turned up to meet the press, right off the plane from the set of Transformers 4, charming us with his chatter. Alan Partridge: Alpha Papa turns out to be another above-par action-comedy - it's a hilariously well-written and impeccably played romp bringing Steve Coogan's iconic 1990s radio/TV character to the big screen. The week's other big movie was the sequel no one really asked for, Percy Jackson: Sea of Monsters. It's pacey and perfectly thrilling for its target pre-teen audience.

More high-brow fare came with Julianne Moore in What Maisie Knew, a strikingly astute family drama costarring Steve Coogan (again!), Alexander Skarsgard and astonishing newcomer Onata Aprile. We also had the trashy delights of Paul Shrader's The Canyons, starring a frazzled Lindsay Lohan alongside swaggering porn-icon James Deen; the fiercely clever and not quite as bleak conclusion to Ulrich Seidl's trilogy Paradise: Hope; the impeccably made but far too long girl-gang drama Foxfire; Ferzan Ozpetek's latest clever mix of present-day Italy with the ghosts of WWII in A Magnificent Haunting; and the involving true story of a gender-bending scandal at the Olympics in Berlin '36. 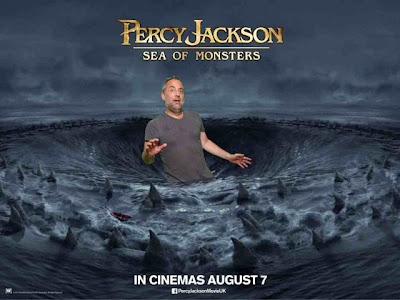