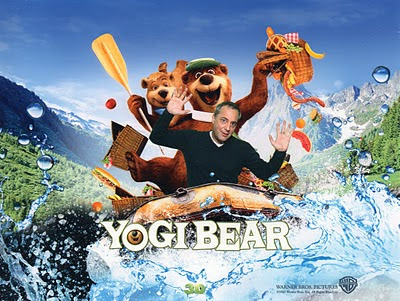 If you're wondering why I look like a vampire in this photo, it's because it was taken at 10am on a Sunday morning, surrounded by swarms of screaming children hopped up on sugar. Delightful.
Posted by Rich Cline at 17:18 No comments:

There was definitely some nervous energy in the air as critics gathered in Leicester Square last night for the first press screening of Pegg & Frost's alien road movie Paul. Universal had laid on vast amounts of pizza and alcohol, which can either mean that they think the film is great late-night fun or in need of a bit of help. But the crowd laughed heartily throughout the screening, and even if comments afterwards were mixed, it was clear that the vast majority (including me) enjoyed it rather a lot.

The other big movie this past week was the Natalie Portman/Ashton Kutcher rom-com No Strings Attached, a relatively engaging film that never quite says anything new.  Much more satisfying were two serious films: from France, Little White Lies is a remarkably involving relationship drama that holds out interest over two and a half hours; from Australia, Oranges and Sunshine is a dark true story about lost childhood with terrific performances from Emily Watson and Hugo Weaving; and from New Zealand, The Insatiable Moon is an emotive drama with odd surreal touches about how society treats people with mental illness.

Back to comedy, we had Killing Bono, from Ireland, starring Ben Barnes and Robert Sheehan as brothers who start a band to rival their high school friends, who go on to become U2. It starts extremely well, but stretches the true story a bit thin. More fun were the unintentional laughs to be found in Age of the Dragons, starring Danny Glover in a dragon-filled adaptation of Moby Dick (yes, really), and the po-faced and extremely low-budget Titanic 2 (surely lightning won't strike twice!), which might be the funniest movie I will see all year. And then I caught up with one of my all-time favourites, which I hadn't seen in at least 20 years, Barbra Streisand and Ryan O'Neal in What's Up, Doc?, written by Buck Henry and introducing Madeleine Kahn. Say no more.

This week in London, critics are being treated to Nicolas Cage in Drive Angry, the underwater thriller Sanctum, the sci-fi thriller I Am Number Four, the medieval British thriller Ironclad, Werner Herzog's 3D doc The Cave of Forgotten Dreams, Alex Gibney's Elliot Spitzer doc Client 9, the Polish drama Essential Killing and, ahem, the Yogi Bear movie. Worringly, half of these films are in 3D.
Posted by Rich Cline at 10:45 No comments:

In his ongoing effort to provide muscled guilty pleasure action movies, Jason Statham isn't wasting any time. For The Mechanic, which UK critics got to see last week, he enters Michael Winner/Charles Bronson territory and delivers mindless thrills like no one else in the business. The other big movie we saw last week was Ron Howard's The Dilemma, which seems unsure whether it's a laddish comedy or a wrenching relationship drama. It's not really either, actually, but it features some nice acting by Winona Ryder and Jennifer Connelly.

Smaller films included the remake of the notorious horror film I Spit on Your Grave, which is so grisly that it's extremely hard to watch; the rather uneven British gangsta comedy Anuvahood, about a young guy who gets into some pretty nasty trouble while trying to be seen as a tough guy; the somewhat grim British drama Travellers, about a group of city boys who have a fateful (and fatal) clash with some Irish gypsies; and the documentary How Much Does Your Building Weigh, Mr Foster?, which explores Norman Foster's particular style of architecture without much analysis.

Coming up this week: Ashton Kutcher in No Strings Attached, Marion Cotillard in Little White Lies, the aforementioned British-Aussie drama Oranges & Sunshine, the Irish comedy Killing Bono, and the marvellous combination of Danny Glover and Vinnie Jones in the medieval romp Age of Dragons, based on Moby Dick. Yes, really.
Posted by Rich Cline at 14:11 No comments: 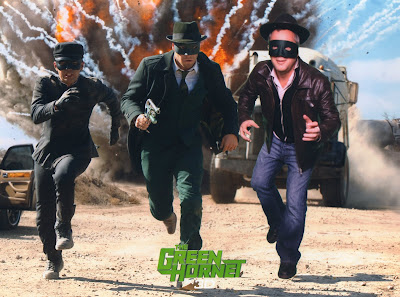 Frankly nothing kicks off the year quite as satisfyingly as a silly Nicolas Cage movie, and Season of the Witch is one of his most pointlessly ridiculous films in years. It's also strangely entertaining, in a "what were they thinking?" sort of way. Much less enjoyable is the year's first real blockbuster, Seth Rogen's take on The Green Hornet, which has the distinct ill-conceived whiff of Wild Wild West about it.

Otherwise, the last few weeks were spent catching up on awards-consideration screeners like Last Train Home (a remarkable Chinese doc that made it into my top 10), Son of Babylon (a terrific Iraqi road movie), GasLand (one of the most cleverly rage-inducing docs in years), Freakonomics (the inventive anthology doc), Aftershock (China's overwrought, big-budget epic hope for this year's foreign film Oscar), and Tiny Furniture (a clever but indulgent indie comedy). I also took the chance to revisit some of my favourites from the year on DVD, including The Kids Are All Right and The King's Speech, both of which hold up - and then some - on second viewing.

Back in the screening saddle, we've had Keanu Reeves in the existential rom-com caper movie Henry's Crime, the hilariously silly animated comedy Gnomeo & Juliet, the superb drama Ballast (which wowed Sundance audiences, erm, three years ago but is only just now coming to the UK), the freaky French homage to Italian giallo cinema Amer, and the rather annoying mock-doc Midgets vs Mascots, which aimed for Borat but comes across as sub-Jackass.
Up next for critics are Ron Howard's comedy The Dilemma, the British comedy Anuvahood, the architectural doc How Much Does Your Building Weigh Mr Foster, something called Oranges and Sunshine, and one of my most-anticipated films of the year: Werner Herzog's 3D doc Cave of Forgotten Dreams.
Posted by Rich Cline at 23:35 No comments:

As it's been a couple of years since the last website makeover, the homepage has a new look, complete with a magazine-style cover that will be updated every week (well, most weeks is probably more realistic). And I'll post each cover here on the blog before it goes live.

Otherwise, I'm making no resolutions for this year. Here's hoping it's a happy one...

Happy New Year from London! I somehow managed to see 484 films in 2010, and here are my best and worst of the year. And if this isn't enough, there are longer lists and rather a lot more of them on the 30th Shadows Awards page...
TOP 10 FILMS:
DIRECTOR:
WRITER:
ACTRESS:
ACTOR:
SUPPORTING ACTRESS:
SUPPORTING ACTOR:
WORST FILMS:
Posted by Rich Cline at 09:05 No comments: