Critical Week: Laugh it up

Two high-profile comedies were screened for the London press over the last week: John Cusack and Rob Corddry in Hot Tub Time Machine and Steve Carell and Tina Fey in Date Night. And the best surprise is that, while both clearly have very silly premises, they're both also very, very funny. And they also have some serious undertones to their stories. Frankly, I can't remember many genuinely funny comedies from Hollywood over the past few years, so let's enjoy them while we can.
The other biggie was the Clash of the Titans remake, which had its press screenings delayed (and press junket cancelled) because the transfer of the film into 3D took longer than expected. Frankly, they needn't have bothered, as the 3D is unnecessary, blurry and even a little annoying. But the movie itself is pretty good fun, with strong effects and a great cast. Staying in the ancient world, we also saw Alejandro Amenabar's Agora, starring Rachel Weisz in a fascinating but strangely awkward story set in ancient Egypt.
Meanwhile, the British Film Institute's 24th London Lesbian & Gay Film Festival has been continuing on the Southbank, with films, events and lots of parties (I need some sleep!). This year's programme has been extremely strong, leading up to the closing film on Wednesday, the excellent Children of God, from the Bahamas. Followed of course by another party.
Next week's film offerings include Julianne Moore in the thriller Shelter, Richard E Grant in the thriller Cuckoo, Tom DiCillo's doc about the Doors When You're Strange, and Austria's award-winning revenge drama Revanche.
Posted by Rich Cline at 23:07 No comments: 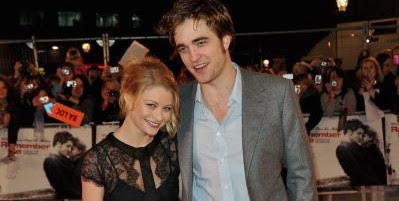 While mopiness knows no bounds in their film Remember Me, Robert Pattinson and Emilie de Ravin managed to smile on the red carpet in Leicester Square last week for the film's UK premiere. It was also one of the very few premieres I've attended, so it was fun to stroll down the bouncy carpet with shrieking girls all around (R-Patts was right next to me, no one seemed to even notice the tiny Emilie, but we exchanged smiles). They gave a giggly introduction to the film, which is one of the most maudlin things I've ever seen. Honestly, it's not easy to care if these miserable characters get together in the end, especially after a climactic plot turn.
The rest of the week in press screenings was pretty uneven. The best films I saw were the ones made for the kids: the riotous 3D Imax experience of How to Train Your Dragon is seriously eye-catching and also a terrifically funny film with exhilarating action scenes, and Emma Thompson's sequel Nanny McPhee & the Big Bang lives up to the enjoyable first film, with a smart script and an A-list cast that more than make up for the film's slapstick lapses.
Less successful were the indulgent festival darling Beeswax, about twin sisters interacting aimlessly with their friends, and Peter Greenaway's Nightwatching, which is visually ravishing and features some very strong acting, but never really makes any sense. At least the Australian drama Beautiful Kate has strong performances that augment its dark freak-out storyline. And I actually liked the skilful low-budget British horror Salvage, which is original and actually scary.
Meanwhile, the 24th London Lesbian & Gay Film Festival kicked off at BFI Southbank, and continues for more than two weeks with some of the most acclaimed festival movies of the past year. This is the UK's 3rd largest festival, and well worth a look. I'm trying to keep up with reviews on the website, and will perhaps blog here later this week as well.
This coming week's press screenings include John Cusack's comedy Hot Tub Time Machine, Rachel Weisz in Alejandro Amenabar's Agora, the Uruguayan drama Leo's Room and the American indie comedy Dare.
Posted by Rich Cline at 23:15 No comments:

Hollywood is clearly stuck in a rut, but at least there's an attempt to tell the same old stories in relatively enjoyable ways. Case in point is the rom-com The Bounty Hunter, which had a few late press screenings in London last week. On paper it looks terrible, teaming two actors (Jennifer Aniston and Gerard Butler) whose romantic comedy track record is patchy at best. Somehow, surprisingly, this one ends up being vaguely good fun.
Much less successful is Old Dogs, starring John Travolta and Robin Williams, which tries to recapture the already dodgy vibe of the same director's 2007 laugh-free Wild Hogs, which seems like a masterpiece in comparison. At the other end of the spectrum is Drew Barrymore's directing debut Whip It, which somehow manages to turn an overfamiliar premise into a hugely enjoyable roller derby comedy starring Ellen Page, Marcia Gay Harden and a terrific supporting cast.
Further off the beaten path over the last week or so, Mike Judge and his strong cast managed to elicit a few chuckles in Extract, Kristin Scott Thomas wowed us with another amazing performance in French in the drama Leaving, Casey Affleck sent chills down our spines in Michael Winterbottom's The Killer Inside Me, the Chinese drama-doc 24 City left us thinking, the offbeat and rather clunky post-apocalyptic Irish film Ditching struggled to hold our interest, the artfully playful Hitchcock collage Double Take held our gaze but left us wanting something more substantial, and the strongly well-cast British art-world romp Boogie Woogie left us scratching our heads.
Coming up are the Robert Pattinson romance Remember Me, Emma Thompson's sequel Nanny McPhee and the Big Bang, the acclaimed Aussie drama Beautiful Kate, the twin sister drama Beeswax, Peter Greenaway's long-awaited Nightwatching, and the buzzy How to Train Your Dragon in 3D on the Imax screen.
Posted by Rich Cline at 23:47 No comments: 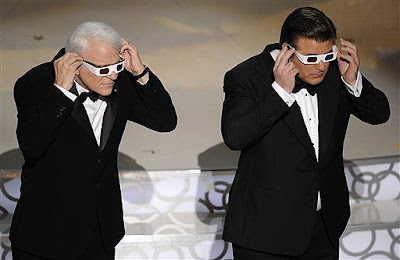 Well, the main event of the awards calendar is now history, although it had a strangely familiar feel to it, confirming expectations rather than actually surprising us. At least it sporadically felt fresh, whether the results were pleasant (Steve Martin and Alec Baldwin's hilariously free-form opening double act) or painful (Neil Patrick Harris' clanking musical number). The winners were very predictable, right down the line. Even The Hurt Locker's big final win was more of a relief than an upset - wiser heads prevailed after all. But don't say that to Meryl Streep.

The show itself felt a bit tired. For all the talk of freshening things up, it still lumbered along without much personality. It was fun trying to guess why presenters were chosen to introduce the Best Picture or lead acting nominees - some of the connections were a little tenuous, but that only made the game more challenging. But after all the talk, it was surprising that there weren't more surprises in the way they staged the show itself. There are rarely surprises amongst the winners. In fact, the only one that came out of the blue was Geoffrey Fletcher for the Precious screenplay, and no one will begrudge him.

The speeches were pretty sober, as usual, but at least it seems like we're finally getting away from lists of names and returning to gushing sentiment, which is a lot more fun. Christoph Waltz managed to do both in another carefully tailored speech, just as he has with the other 800 awards he's won this season. It was sublime to see Jeff Bridges finally up there as a winner. Kathryn Bigelow broke a big Oscar barrier with sheer skill and class. And three cheers to Mo'Nique for blasting the absurdity of awards campaigning in her speech. In the fashion stakes, Kate Winslet once again wins hands down for being most glamorous person in the room. And Gabourey Sidibe wins for both the most fabulous dress and the best red carpet comment: "If the Oscars were porn, this dress would be the money shot."
Posted by Rich Cline at 15:03 No comments:

Greetings from sunny, warm New York! I'm looking forward to watching the Oscars in normal hours this year rather than staying up all night in a crowded BBC studio. Here are my picks and predictions for tonight...

PICTURE
Will probably win: Avatar
More-deserving upsets: The Hurt Locker, Inglourious Basterds, Up in the Air
Should win: A Serious Man

FOREIGN FILM
Will win: The Secret in Their Eyes
Should win: A Prophet
Possible upset: Ajami

ADAPTED SCREENPLAY
Will win: Up in the Air
Should win: In the Loop
Deserving upset: Precious 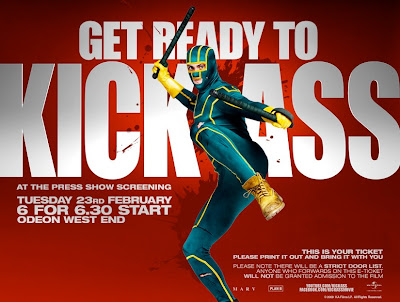 The most eagerly anticipated press screening last week was Matthew Vaughn's raucous Kick-Ass, the fiercely independent adaptation of the non-super hero comic. All I can really say is that I am sure it will be a massive hit. The other big screenings last week were Paul Greengrass' thrilling Green Zone, starring Matt Damon and adapted from the bestselling book about the hunt for WMDs in Baghdad just after the 2003 invasion, and Neil Marshall's snappy Centurion starring Michael Fassbender in an action yarn from Britain's Roman era.
Slightly less high-profile were the gentle Ricky Gervais comedy Cemetery Junction, about teen life in 1970s Reading, and Uma Thurman in the low-key Manhattan mommy comedy Motherhood. Still further off the grid were the moody indie British prison drama Release, the scruffy British football-fan road comedy The Shouting Men, and a trio of foreign films: the stunning bromance Plan B from Argentina, the emotional gut punch of the gay orthodox Jew drama Eyes Wide Open and the rather bold Bahamian drama Children of God.
This coming week I only have two screenings - the Chinese drama-doc 24 City and the Kristin Scott Thomas drama Leaving - plus a few more festival films to watch. But the lack of screenings is explained by the fact that I'm off to New York on Wednesday for a few days, which means I'll get to watch the Oscars on Sunday at a normal hour rather that staying up all night in London as usual.
Posted by Rich Cline at 23:12 No comments: