Critical Week: Film of the year (so far)

We're not quite halfway through the year, but this week I finally saw a movie that could become my film of 2011: Asghar Farhadi's A Separation, the only film that's ever won three Bears at the Berlin Film Festival (pictured L to R with the awards for best film, actor and actress: Sareh Bayat, Sarina Farhadi, Peyman Moadi, Asghar Farhadi, Alki Asghar Shahbazi and Babak Karimi). It's a staggeringly well-made film with a story that, while set in Iran, is powerfully relevant to anyone in the audience.

And there was another pleasant surprise in X-men: First Class, a franchise blockbuster that's actually a great movie on its own. It's also a rare adventure that has genuinely thrilling action and challenging, complex characters. From the grab bag, we had Chris Weitz's involving immigration drama A Better Life, the relentlessly charming Audrey Tatou, Sami Bouajila and Nathalie Baye in the French rom-com Beautiful Lies; and David Sington's fascinating (and terrifying) economic-collapse doc The Flaw.

This coming week we have a couple of big Hollywood titles, including Cameron Diaz in Bad Teacher and Kristen Wiig in Bridesmaids, as well as a number of smaller films including, finally, Lee Chang-dong's acclaimed Poetry, the British thriller Siren, and two Italian dramas: David's Birthday and Sea Purple.
Posted by Rich Cline at 20:32 No comments:

This week's Sunday morning treat was the 3D sequel Kung Fu Panda 2, reuniting Jack Back with his starry vocal cast of heroes for another epic Chinese adventure involving another British villain (Gary Oldman's evil peacock). The other big screening was another sequel, also set in Asia and not quite up to the standard of the original: The Hangover Part II sends our hapless gang staggering around Bangkok after another messy, not particularly funny night out.
Other films screened this past week were lower profile, but each was entertaining in its own way: there was Brendan Gleeson in the riotously clever In Bruges-style crime comedy The Guard; Jesse Eisenberg in the intriguing Hasidic drug dealer drama Holy Rollers; Kim Cattrall as a washed-up pornstar in the geeky but engaging coming-of-age comedy Meet Monica Velour; Gerard Depardieu as a shambling long-haired biker dude in the arty comedy Mammuth; Bertrand Tavernier's fascinatingly well-made period romance The Princess of Montpensier; and the quietly riveting Kyrgyz drama The Light Thief.

This coming week, summer cranks up a notch with a screening of the next big action blockbuster X-men: First Class, plus Chris Weitz's East L.A. drama A Better Life, Audrey Tatou in the French rom-com Beautiful Lies, the award-winning Iranian drama A Separation, the British prison drama Screwed, and the global economy doc The Flaw. Hopefully this sunny weather will hold out for the long weekend ... and that Icelandic volcano will stop disrupting flights.
Posted by Rich Cline at 23:40 No comments: 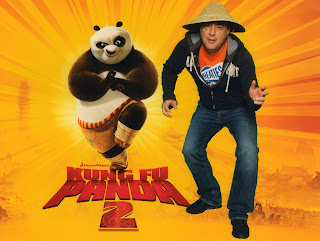 A groggy film critic at another slightly too-lively Sunday morning screening, but still ready for action...
Posted by Rich Cline at 12:43 No comments:

The jury members at the 64th Cannes Film Festival get their moment of glamour before deliberations start in earnest: they present their awards this weekend. It's certainly been fun to read stories of audience reactions to big-name films that arrive with huge expectations. When we will get to see them is anyone's guess.

Meanwhile here in London, we had a couple of horror movies: the excellent Spanish thriller Julia's Eyes and the not-so-good American remake Mother's Day. There was also the gripping but over-stuffed Italian true-crime drama Angels of Evil, a radiant Catherine Deneuve in Francois Ozon's bright 70s-style comedy-drama Potiche, and the undercooked but emotionally involving British prison drama Ghosted. And there were two documentaries: Lucy Walker's terrifyingly unnerving Countdown to Zero, about the danger of nuclear material falling into the hands of terrorists, and the remarkably engaging Donor Unknown, about a beach bum who discovers he has dozens of children from his years as a sperm donor.

Easily the biggest press screening of the past week, Pirates of the Caribbean: On Stranger Tides was shown to UK critics in advance of this week's European premiere as well as the big Cannes Festival screening this weekend. Johnny Depp is back for another comical romp, indicating that this franchise could possibly go on forever. The other Hollywood movies this week were both very late week-of-release screenings: Priest is a noisy, derivative futuristic vampire thriller starring Paul Bettany in yet another offbeat religious role; Take Me Home Tonight is a raucous, derivative 80s-style comedy starring Topher Grace in yet another offbeat period role.


Acclaimed foreign films included the Oscar-winning Danish drama In a Better World, exploring the human proclivity to violence through the eyes of two boys; and A Screaming Man, an intensely personal look at life in war-torn Africa. And there were some intriguing smaller dramas as well, including Keira Knightley and Sam Worthington in the stage-like relationship drama Last Night; Helen Mirren, Sam Worthington (again) and Marton Csokas in the Mossad dramatic-thriller The Debt; Charlotte Gainsbourg and Marton Csokas (again) in the Aussie family drama The Tree; the amazing Mia Wasikowska in Gus Van Sant's sensitive drama Restless; and Jason Statham in the enjoyably corny London cop thriller Blitz. Wildcard movies included Prom, another Disneyfied high school romp, and Senna, a documentary about one of the greatest Formula One drivers ever.

This coming week is calmer, if scarier, with the Spanish horror thriller Julia's Eyes, the slasher-horror remake Mother's Day, the Italian crime thriller Angels of Evil, the gritty prison drama Ghosted, plus two scary-looking docs: Countdown to Zero, about the nuclear arms race, and Donor Unknown, about a guy who discovers he has a child. And of course the 64th Cannes Film Festival kicks off on Wednesday with the latest Woody Allen movie. But I'm staying in sunny London this year.
Posted by Rich Cline at 11:44 No comments:

The two big movies screened for critics this past week touched on serious relational issues. Trust is David Schwimmer's latest directing effort, a chilling drama about internet grooming starring the remarkable Liana Liberato (pictured) as a 14-year-old who has no idea how much trouble she's in. And then there's Water for Elephants, the Depression-era circus drama about a dodgy marriage between ringmaster Christoph Waltz and performer Reese Witherspoon that's interrupted by the still-mopey Robert Pattinson and his more-interesting elephant.
We also were able to catch up with Rachid Bouchareb's Oscar-nominated Outside the Law, an involving but melodramatic exploration of colonialism; Rutger Hauer in the latest luridly extended Grindhouse trailer Hobo With a Shotgun; the fascinating chess-champion documentary Bobby Fischer Against the World; and the mostly animated Imax romp Flying Monsters 3D with David Attenborough.

Screening this week are two big blockbusters: a late screening of Paul Bettany in the vampire thriller Priest and the franchise reboot Pirates of the Caribbean: On Stranger Tides (new director, new supporting cast). Other high-profile offerings include Topher Grace in Take Me Home Tonight, Keira Knightley in Last Night, Helen Mirren in The Debt, the Disney kiddie romp Prom, Gus Van Sant's Restless, Jason Statham in Blitz, Charlotte Gainsbourg in The Tree and the acclaimed A Screaming Man from Chad.

Sadly, Terence Malick's The Tree of Life - my most-anticipated film of 2011 - has been caught in a UK distribution mess: it was supposed to open this Friday, but is now in limbo. Sigh!
Posted by Rich Cline at 11:12 No comments: