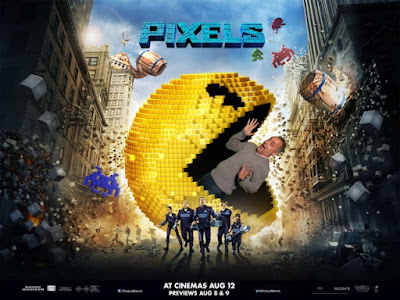 I took it relatively easy this week - only six films! And I neglected all of my screener discs and links to escape London for the rainy weekend. So this coming week will be a bit of a catch-up movie marathon. At screenings, there were several enjoyable surprises. Meryl Streep (above) is of course terrific as an ageing rock chick in the snappy family drama Ricki and the Flash. Tom Cruise (below) is lean and ready for action in the dark and involvingly gritty Mission: Impossible - Rogue Nation. And the terrific Emily Blunt is lean and tough in the riveting drug cartel thriller Sicario, ably supported by Josh Brolin and Benicio del Toro on top form.

Less a horror movie than a dark drama about bullying, The Gift is a solid freak-out starring Jason Bateman, Rebecca Hall and actor turned promising writer-director Joel Edgerton. Danny Huston, Matthew Goode and Joe Cole do what they can with the waterlogged script of the underwater thriller Pressure. And Ian Ziering and Tara Reid are back for another silly romp in Sharknado 3: Oh Hell No, which sees the budget increase but not the filmmakers' skills. At least they keep finding new ways to make us laugh.

Coming up this week, we have Amy Schumer in Trainwreck, Adam Sandler in Pixels, the teen romance Paper Towns, the star-packed doc Unity, the historical British drama Captain Webb and the Russian drama Stand. Plus the aforementioned catching up.
Posted by Rich Cline at 12:51 No comments:

The UK Film Distributors' Association launches its annual summer State of the Art Cinema exhibition today, which is free to visitors over six weeks this summer. On display are a series of movie artwork including posters beautifully printed on aluminium, stills from upcoming productions and a few other objects. Essentially the goal is to provide a snapshot of cinema poster design, grouped into such categories as British films, family releases, coming-of-age stories, action, thrillers, biography and documentary. (Several are in the image here.) 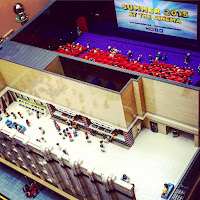 The centrepiece of the exhibition is a stunning Lego cinema (right), built using more than 25,000 bricks. It's astonishingly detailed, from the art deco exterior, bustling lobby, detailed snack bar, projection booth and 200-seat cinema with a working screen on which visitors can watch trailers, shorts and even The Lego Movie. It's also populated with hundreds of lego people, including wizards, rock stars and pirates.

Filling just two rooms, the exhibition isn't huge, and is a nice respite while walking the mobbed streets of London over the summer months. It reminds us of favourite films and those we're looking forward to, and fans of the art of poster design will enjoy spotting this year's trends and innovations. (Robert Zemeckis' The Walk certainly breaks some rules - just looking at the poster can induce vertigo!)

Critical Week: The homecoming queen's got a gun!

It's been another eclectic week for London-based film critics. One of the more offbeat films was Barely Lethal, starring Hailee Steinfeld (above) as a teen who was raised to be a ruthless spy, then runs away to see what going to high school is like. It's a likeable pastiche of teen movies, although it oddly seems both too safe and too gun-happy. A much more anticipated family movie was a late screening of the already acclaimed new Pixar-Disney animation Inside Out, which had a gala Sunday morning screening introduced by director Pete Docter and cast members Amy Poehler and John Ratzenberger. The lovely film is both a comical adventure and a strikingly honest look at growing up. And it screens with the simply gorgeous short film Lava.

Other big-name films this week included the Ryan Reynolds thriller Self/Less, which starts well but opts to ignore its themes in lieu of a contrived action-thriller plot. And Michael Douglas hunts Jeremy Irvine in the New Mexico desert in Beyond the Reach, which is utterly preposterous but has its moments thanks to the actors and the landscapes.

A bit further afield, we had the indie mob drama 10 Cent Pistol, which is sharply made but waits too long before it lets the audience into the story; the clever, jaw-dropping reality TV romp Shooting the Warwicks, which is one of the blackest comedies you'll ever see; the floaty-whiny indie drama Buttercup Bill, which spends so much time being achingly cool that it forgets to properly tell its story; and the well-made eye-opening doc Bolshoi Babylon, which digs into the controversial workings of the world's top ballet theatre.

This coming week, we have the lean-mean Jake Gyllenhaal in a late screening of Southpaw, Tom Cruise back in action for Mission: Impossible - Rogue Nation,  Reese Witherspoon and Sofie Vergara in the action-comedy Hot Pursuit, Emily Blunt in the dark drama Sicario, Josh Hutcherson in the drug cartel drama Escobar: Paradise Lost, Danny Huston in the underwater thriller Pressure, and the military dog drama Max.
Posted by Rich Cline at 20:20 No comments: 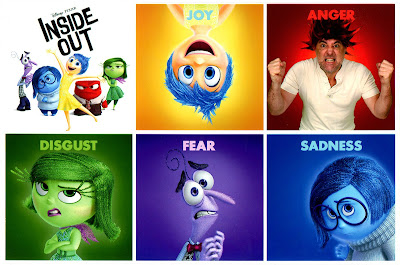 It was a busy week for UK critics, with another head-spinning collection of screenings. Robert Carlyle stars in and makes his directing debut with The Legend of Barney Thompson, an uneven black comedy costarring a scene-stealing Emma Thompson (as his mum, above) and Ray Winstone. It never quite gets the tone right. Also struggling with its tone, True Story recounts a fascinating real-life mystery starring Jonah Hill, James Franco and an almost-not-there Felicity Jones. Fascinating but too mopey to come to life properly. And Diane Keaton and Morgan Freeman are terrific in Ruth & Alex (aka 5 Flights Up) as a long-married couple planning a move from their beloved Brooklyn apartment. It's engaging but slight. 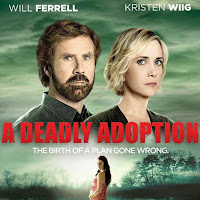 I took a break from the cinema to catch A Deadly Adoption on Channel 5. Will Ferrell and Kristen Wiig star in this hilariously overwrought thriller that is either a raucous spoof or just another ridiculous Lifetime movie. You be the judge. Either way, it's very funny as it follows a damaged couple hoping to save their marriage by adopting a baby from an apparently sweet young pregnant woman. But of course it all turns nasty. Full credit to Ferrell and Wiig for never winking at the camera.

Further afield, we had the Aussie animation Maya the Bee, a charming and energetic little adventure; the found-footage horror The Gallows, which should really put an end to the genre with its utter lack of originality; and the riotous 1980s slasher movie spoof Dude Bro Party Massacre III, which manages to maintain the joke perfectly right to the very end. And there were also two docs that both rely far too heavily on talking heads: Misery Loves Comedy is an intriguing all-star exploration of the life of a stand-up, while Looking for Love explores romance in London's Afro-Caribbean community with insight and lots of personality.

Coming up this week: the new Disney-Pixar hit Inside Out, Ryan Reynolds in Self/Less, Jessica Alba in Barely Lethal, Michael Douglas in Beyond the Reach, Jena Malone in 10 Cent Pistol, the American indie drama Buttercup Bill, and two docs: exploring the Russian ballet company in Bolshoi Babylon and an acclaimed profile of six teen brothers in The Wolfpack.
Posted by Rich Cline at 18:04 No comments: 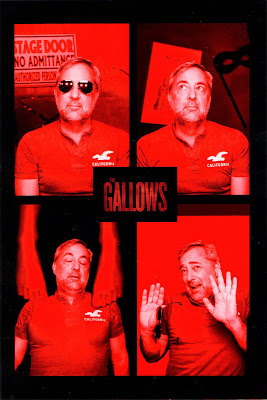 Britain on Film: Thousands of stories

The British Film Institute launched its latest initiative Britain on Film on Tuesday with a powerfully personal presentation exploring a range of film footage shot since the dawn of cinema: home movies, newsreels, amateur productions and some fictional films. This includes the first known home movie ever shot (in 1902 Bognor Regis). When it's complete, more than 10,000 films will be available digitally through the BFI's online streaming service. Some 2,500 went online this week.

In the clips shown at the press launch, I was especially surprised to see scenes shot in four places I have called home in Britain over the past 23 years. There's a hilarious sequence shot in Bradford, in which an aspiring mogul attempts to shoot a Bollywood epic just outside Ilkley. In Ayot St Lawrence, Hertfordshire, the playwright George Bernard Shaw has a rather surreal afternoon with Danny Kaye in 1951. There's a pet show at Alexandra Palace, proving that scenes of cute kittens didn't start with YouTube. And the morning's event concluded with a live performance from musical duo Public Service Broadcasting, using edited clips from the 1940 doc London Can Take It!, showing the city's resilience in the face of German bombs. This was especially poignant as the launch event was held on the 10th anniversary of the 7/7 terrorist attacks.

In the UK, visitors to the Britain on Film section of the BFI website (specifically: player.bfi.org.uk/britain-on-film) can click on a map to find footage from all over England, Scotland, Wales and Northern Ireland. Being brand new, the site is a bit glitchy at the moment (I couldn't locate any of the clips mentioned above), but is sure to become smoother and easier to use over the coming months.

A couple of big films screened to the London press this week, including Marvel's latest blockbuster Ant-Man, a hilariously engaging action romp that's sure to win over just about everyone in the audience. The adult comedy Ted 2 carries on the story of Mark Wahlberg and his best pal, a talking teddy bear voiced by Seth MacFarlane. And its nonstop barrage of adult-aimed humour is packed with laugh-out-loud moments. Saoirse Ronan is superb as always in Brooklyn, an emotional epic about a young woman migrating from Ireland to America in the 1950s.

There were also two very different documentaries: The Salt of the Earth is the stunning story of photographer Sebastao Salgado, who changed the world (and himself) with his daring, potent photos of humanity and nature, while The Nightmare is a gimmicky doc about sleep paralysis told as a horror freak-out without any expert commentary. There was also the inventive British indie thriller 51 Degrees North shows considerable promise, even if the found-footage structure leaves it somewhat fragmented. And the American indie Angels With Tethered Wings felt rather thrown together with jarringly contradictory tones in each plot thread, amateurish direction and a cast that can't keep up.

This coming week we have Ryan Reynolds in Self/Less, James Franco in True Story, Diane Keaton and Morgan Freeman in Ruth & Alex, Craig Roberts in Just Jim, the horror thriller The Gallows, the animated adventure Maya the Bee, the romance doc Looking for Love and two horror comedies: 100 Bloody Acres and Dude Bro Party Massacre III.
Posted by Rich Cline at 18:31 No comments: 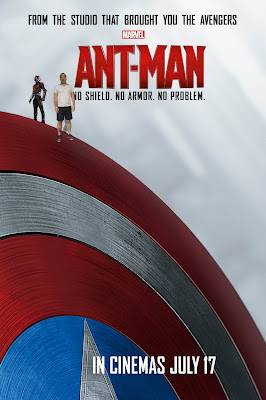 Critical Week: Back to black

Asaf Kapadia's documentary Amy provided an emotional experience for London critics this week, a beautifully made film recounting the wrenchingly sad story of local girl Amy Winehouse. It stood in stark contrast to the two other big releases of the week: the surprisingly loose and thoughtful sequel Magic Mike XXL, which combines silly striptease antics with an exploration of male friendship; and the formulaic Terminator Genisys, which attempts to reboot the sequel without any inventive writing or directing and only one solid performance (from Emilia Clarke). Although Arnie's deadpan humour livens things up.

I also caught up with last week's release Minions, the Despicable Me prequel that's surprisingly low-key and charming rather than the usual sharp-edged digitally slick action mayhem. And I watched the 10 shorts that Peccadillo has collected for Boys on Film 13: Trick & Treat - another terrific collection of mini-epics dealing with various aspects of sexuality.

Coming up this week: Saoirse Ronan and Domhnall Gleeson in Brooklyn, the doc-style horror film The Nightmare, the doc Misery Loves Comedy and a few more. Thankfully, with a heatwave in London, it's refreshing to take a break in an air-conditioned screening room!