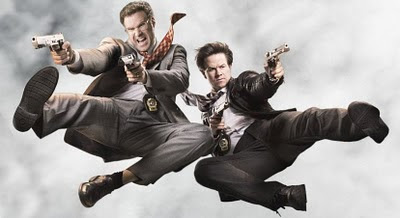 Finally, the summer produces a gleeful, guilty-pleasure action comedy. Against all odds, The Other Guys is enormous good fun, with terrific chemistry between Will Ferrell and Mark Walhberg and a sharp, smart script. The week's other surprise was the Eli Roth-produced thriller The Last Exorcism, which is much more cerebral than expected, and scarier as a result. Sure it's another Blair Witch-style handheld horror, but it's thoughtful enough to keep our minds engaged even as we're being freaked out.
Rather less exciting was the violent heist thriller Takers, which wastes its decent ensemble on incoherent action. Jonah Hex lays waste to its source material and a strong cast by being merely loud and chaotic. And Vampires Suck only mimics Twilight without coming up with anything remotely clever, although it's strangely more engaging than the Twilight movies simply because the cast seems to be having fun. And finally, The Special Relationship is the third in Peter Morgan and Michael Sheen's Tony Blair trilogy (after The Deal and The Queen), insightfully tracing the Prime Minister's interaction with Bill Clinton. But by ending just as George W enters the frame, the TV movie misses the chance to say something really interesting.

The surprise of the week for journalists is that Piranha 3D is one of the most enjoyable action movies of the summer - irreverent, smart and very silly. Oddly, the Weinstein brothers opted not to screen the film for critics in the USA, but we in the UK got one screening, and the riotous laughter was constant.
Less successful was the week's big blockbuster screening, Scott Pilgrim vs the World, which is witty and visually snappy but sacrifices story and characters along the way. By contrast, two female-led thrillers kept us much more entertained. Angelina Jolie confirmed her action-hero chops with the skilfully made Salt, while Noomi Rapace continued to seduce us as Lisbeth Salander in The Girl Who Played With Fire.

Off the beaten path, we had the charming and seriously engaging road movie Wah Do Dem, and the blackly hilarious Chilean film The Maid. I also managed to catch up with Banksy's enjoyably untrustworthy feature debut, Exit Through the Gift Shop, a rather brilliant look at the art world that comes out soon on DVD.
This coming week we have the bank robbers thriller Takers, the Will Ferrell comedy The Other Guys, Josh Brolin in Jonah Hex, and the indie horror thrillers The Last Exorcism, Burning Bright and Splintered. So what is it with all the horror at the moment? Perhaps it's a reaction to the economic situation...
Posted by Rich Cline at 09:33 No comments:

Actually the pictured film, Cyrus, was one of the less-cheesy films in a week that seemed oddly packed with gimmicky movies. But at least this one subverts the rom-com formula with a sharp story of two men (son Jonah Hill and boyfriend John C Reilly) fighting over a woman. Complex characters and an offhanded sense of humour help a lot. By contrast, Dinner for Schmucks wasn't quite so subversive or complex, but the silliness was made watchable by Steve Carell and Paul Rudd, plus a hilarious supporting cast.
But by far the cheesiest film screened for London critics this week was Marmaduke, which even a likeable cast couldn't rescue. And speaking of rescue, no help was in sight for the characters in Frozen, which traps three decent young actors in a chairlift for a few days of dangling, jangling yuckiness.
As usual, the week's more interesting offerings came from abroad. Certified Copy is an Italian-French exploration of originality and creativity from Iranian maestro Abbas Kiarostrami and Cannes-winning actress Juliette Binoche. Also from Italy, Ferzan Ozpetek turns his usually dramatic hand to farce with the lively and thoughtful ensemble comedy Loose Cannons. And from Sweden we had Involuntary, an artfully made five-strand exploration of peer pressure.
This coming week will bring us more from Sweden with the middle part of the Millennium trilogy, The Girl Who Played With Fire, plus another big American action comedy in Scott Pilgrim vs the World. I'll also catch up with a late screening of Angelina Jolie in Salt, the schlock of Piranha 3D, the American indie drama Wah Do Dem and the acclaimed Latina drama The Maid.
Posted by Rich Cline at 12:44 1 comment: 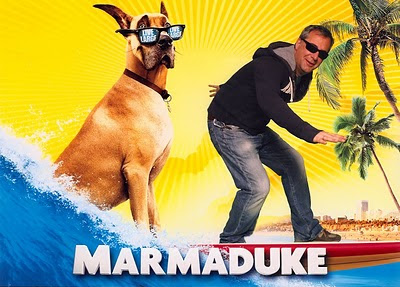 Yes, the big press screening this week was Sylvester Stallone's The Expendables, which is even louder and dumber than we could have hoped. Action fans will adore it, and not just because of that astonishing cast list. Two other big-name movies will have wider appeal: the Drew Barrymore-Justin Long romantic comedy Going the Distance, tracing a long-distance love story, and Stephen Frears' romance-novel romp Tamara Drewe, which stars the terrific Gemma Arterton, Dominic Cooper and Roger Allam.
From France we saw Le Refuge, one of Francois Ozon's more challenging films, mainly because it's so light-handed. And the Belgian animated comedy A Town Called Panic is simply impossible to describe: it uses toy figures to tell a nutty tale that keeps us giggling even though we don't know why.
Independent films included the revenge horror The Final, which starts extremely well before becoming rather pointless; the Canadian prison drama Dog Pound, which uses its edgy cast to unsettling effect; and the startlingly good Down Terrace, which cleverly reinvents the British crime drama as a black comedy set almost completely in a Brighton house.
This coming week we have John C Reilly and Jonah Hill in Cyrus, Steve Carell and Paul Rudd in Dinner for Schmucks, Owen Wilson voicing Marmaduke and the chair-lift horror Frozen, plus entries from Italy (Ferzan Ozpetek's Loose Cannons) and Sweden (Involuntary).
Posted by Rich Cline at 17:00 No comments: