On the Road: Oldboy and coming attractions

For me, one of the most important things about being on vacation is not seeing movies! But of course with my job I'm always needing to see things to fill in gaps since I'm missing London press screenings by being away. And at this time of year there are also awards-consideration screenings to keep in mind - so I may try to catch some of those in Los Angeles this weekend.

Today I saw Spike Lee's remake of Park Chan-wook's 2003 fan favourite Oldboy, which opened today in America and hits Britain next week. It's the twisty story about a man (Josh Brolin, pictured) inexplicably imprisoned for 20 years and then released without warning, then trying to figure out who did this and why. Brolin is good, as is his guardian angel Elizabeth Olsen. But Lee's direction is so overstated that it flattens the film's snaky plot. This includes the frustratingly obvious score, pushy emotions and strangely broad performances by the villainous Samuel L Jackson and Sharlto Copley (oddly channelling Darren Brown). In other words, this is the kind of movie that needs the edgy Do the Right Thing-era Lee rather than the bland technical skill of Inside Man-era Lee.

There were eight trailers before Oldboy - which was cool since I so rarely get to see them on a big screen. I'd seen the teaser for Pompeii before (looks over-serious but fun), and also the latest, more detailed look at Scorsese's The Wolf of a Wall Street (can't wait to see all three hours of it). It was fun to get some more detail on David O Russell's star-packed and apparently unmissable 1970s drama American Hustle (including both Bradley Cooper and Amy Adams with their hair in rollers).

On the other hand, the more detailed trailer for Walking With Dinosaurs gave me pause: despite the photo-realism, these are comical talking dinosaurs, so expectations are down a big notch. And That Awkward Moment doesn't look like nearly as much fun in its cleaner green-band trailer, but I still like Zac Efron, Michael B Jordan and Miles Teller enough to look forward to it.

Otherwise, I hadn't yet seen anything from Non-stop, the latest Liam Neeson action romp, which promisingly costars Julianne Moore and Michelle Dockery (neither of whom actually does anything in the trailer). It looks like a po-faced thriller that would really benefit from a hive of snakes. Grudge Match looks frankly ridiculous, playing on Sylvester Stallone and Robert De Niro's boxing movie past for a comedy-drama that looks unsurprisingly uneven (it's also no surprise which actor seems to be taking things rather a lot more seriously). And finally, Devil's Due is a terrific title for a B-movie antichrist horror thriller about a happy couple whose life goes all Rosemary's Baby on them. The movie looks appropriately slick and stupid.
Posted by Rich Cline at 11:53 No comments:

On the Road: The Book Thief and more

On holiday in rainy Southern California, I've been mainly spending time with my family up to now - very nice! Now over the next week or so it's time to run around the area seeing friends and relatives from  Orange County to Pasadena, from Santa Monica to Palm Springs. Am hoping to catch up with a few more films along the way too - a couple open next week, and there are also some awards-consideration screenings out here to catch.

I caught one film on the plane flight out here: CBGB, the story of the famed music venue in New York, where punk and indie rock ruled the 70s and 80s. It's an enjoyable slice of history, with a solid performance from Alan Rickman at the centre and lots of big name cameos, but the movie is shot and edited in an annoying comic book style that continually distances us from the characters and situations.

I also caught The Book Thief (pictured), starring Geoffrey Rush, Emily Watson and newcomer Sophie Nelisse. It's a great story about the power of words set in Nazi Germany and told from a child's perspective, and the actors are good (particularly Watsona a the gruff but ultimately too-kindly adoptive mum). Sadly, the whole film is glossy and sweet, focussing on Oscar-bait dramatics and cute touches that undermine the horror of the situation. It feels like a magical fairy tale rather than a story set in a real time and place in which thousands were dying. Every day.
Posted by Rich Cline at 11:53 No comments:

The big screening this past week for UK critics was, of course, The Hunger Games: Catching Fire, the second chapter in the saga, which ramps up the stakes considerably with its beefier story, potent cast and bigger effects budget. We were all pretty stunned afterwards - in a good way. Jude Law stars in Dom Hemingway, an offbeat British crime comedy-drama that starts extremely well but takes a mopey turn about halfway in. And I also caught up with Dallas Buyers Club, starring a gaunt Matthew McConaughey in the true story of a man subverting government and pharmaceutical inaction during the 1980s Aids epidemic - an involving, important story.

Further afield, the Italian comedy Tell No One is a warm and engaging coming-out story, while the Aussie drama Monster Pies is a much darker teen drama that also grapples with sexuality issues. And there were two docs: the colourful, fascinating Exposed features full-on burlesque artists, while the clever This Ain't California fictionalises the real story of skaters rebelling against East German control.

Shadows is on holiday over the next two weeks, but I plan to see some films while I'm in America. On my to-see list are Oldboy, Frozen, The Book Thief and Charlie Countryman, and I am also working on possible awards-consideration screenings of things like American Hustle, August: Osage County and others. Watch this space for updates!

In the mean time, below are the Shadows covers for the next two weeks...

Yes, James Franco goes evil for the new Jason Statham thriller Homefront, about a former government agent hiding out in a Louisiana bayou with his young daughter. Comments on the film are embargoed until it opens in a couple of weeks. Comments are also embargoed for Vince Vaughn's new film Delivery Man, Ken Scott's own remake of his 2011 French Canadian comedy-drama Starbuck, about a guy who discovers he has 533 kids due to a mix-up at a sperm bank.

I can however comment on Ridley Scott's new film The Counsellor, a slickly made thriller with an impenetrable story and characters, which leaves it oddly uninvolving. But Michael Fassbender and Penelope Cruz are especially good in a cast that includes Cameron Diaz, Javier Bardem and Brad Pitt. Free Birds is the Thanksgiving-themed animation that mixes wildly inane storytelling and some hilariously deranged humour.

A bit further off the beaten path, the British comedy-drama Breakfast With Jonny Wilkinson is a charming if somewhat silly farce about a small group of people watching the nailbiting final of the 2003 Rugby World Cup. And then there were three Jewish movies: Cupcakes is Eytan Fox's massively entertaining pastiche of Eurovision mania with a terrific cast and great songs; Fill the Void is an involving drama set within an Orthodox Jewish family; Let My People Go is an enjoyably wacky French comedy about the romantic problems of a young gay man and his particularly nutty Jewish family.

This coming week I only have a couple of screenings in the diary: The Hunger Games: Catching Fire screens to the UK press on Friday 8th November ahead of its world premiere in London on Monday night. And I have an awards-consideration screening of Matthew McConaughey's Dallas Buyers Club. I've also got a number of videos to watch before I fly out next Friday for two weeks with family and friends in Southern California, where of course I hope to catch up with a few other things.... 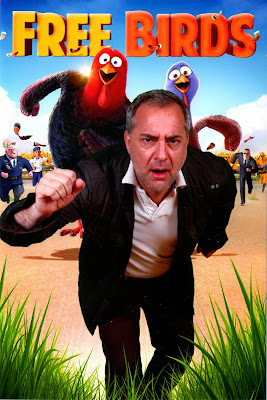 Sunday morning press screenings surrounded by hyped-up children: never my preference (but they can be a lot of fun).

Extra credit: Spot the googly-eyes on me in that photo!
Posted by Rich Cline at 16:48 No comments: