Festival Days: It's a conspiracy

Another film in both the Edinburgh and East End film festival is the eco-terrorism thriller The East, which also opened in UK cinemas this weekend. It's an intriguing cinematic experiment, playing with issues we usually only see in documentaries while also merging arthouse filmmaking sensibilities with some suspense-based thrills. In other words, there's something for everyone here!

As for screenings this week, I caught up with the East End Film Festival closer Lovelace, a someone straight-laced biopic of the world's most famous porn star. It's sharply well made and is packed with strong performances and amusing cameos. Daniel Radcliffe plays Allen Ginsberg in Kill Your Darlings, a true story set in his pre-writer days when he was in school with William Burroughs and Jack Kerouac (Ben Foster and Jack Huston). My comments on the film are embargoed for now, even though there are reviews all over the internet after its screenings at various film festivals, including Sundance in January. I also saw the film of Neil LaBute's play Some Girl(s), a provocative, thoughtful, slightly stagey drama starring Adam Brody. And there was also Emperor, a fictionalised take on how General MacArthur (Tommy Lee Jones) dealt with Emperor Hirohito after the war - plus a bit of romance and drama featuring Matthew Fox.

And I also saw a couple of other East End Film Festival titles: the hilarious mock-doc Discoverdale, which is like an Irish version of This Is Spinal Tap, although the band at the centre is a real one. And In the Name of is a wrenching drama from Poland about a priest struggling with his personal yearnings. Both are highly recommended.
Posted by Rich Cline at 14:18 No comments:

Festival Days: Think before you watch

Set in Tunisia, the Dutch film Die Welt opens with its protagonist Abdellah (Abdelhamid Naouara, above) giving an impassioned plea to a customer at his DVD shop not to watch Transformers 2, because it represents not only American cinema at its most ridiculous, but it is also packed with lazy ethnic stereotypes. The customer ignores him, but we don't! And it's appropriate that the film is screening at both the Edinburgh International Film Festival and the East End Film Festival in London this month. I'm watching lots of things at both festivals this year, along with the regular releases. So my festival reports are taking a bit of a different form this time.

Among the regular screenings, we caught up with recent US release The Internship, a deeply silly comedy starring Vince Vaughn and Owen Wilson. Museum Hours is a strikingly artful exploration of how art and life mingle, set around a museum worker in Vienna. And Dream On is a clumsily made teen drama that has some important themes in it.

Festival-wise we had a chance to see Mike Figgis' playful mystery thriller about movie-making and creativity Suspension of Disbelief. There was also the lively documentary Richard Pryor: Omit the Logic, packed with unseen footage and new insights. And the offbeat, unsettling Mexican drama Halley.

There are also a number of films at the Edinburgh festival that I've already seen. Among my favourite films of the year are Noah Baumbach's Frances Ha and Sarah Polley's Stories We Tell. Otherwise, I really enjoyed Monsters University, found the eco-terrorism drama The East to have some potent moments, and thought the Icelandic true thriller The Deep was pretty haunting. We Steal Secrets is a strikingly well-made exploration of the culture of secrecy, while Shane Carruth's surreal thriller Upstream Color is worth a look for it's pure bravura, not that it's easy to make much sense out of it. Full reviews to come.

This week's child-friendly Sunday morning press screening was for the sequel Despicable Me 2, which is just as frantic and hilarious as the first film, maybe more so. We also had a late-scheduled screening last week for the hugely entertaining Superman movie Man of Steel, which is relaunching the franchise faster than a speeding bullet. A sequel is already planned for release next year, but it seems a little unlikely as there isn't even a script yet (that we know of). We also caught up with Kristin Wiig and Annette Bening in the uneven comedy Girl Most Likely, which has some very strong moments and characters. There were also Nicolas Cage and John Cusack playing cat and mouse in Alaska in the improbable-but-truecrime murder thriller The Frozen Ground and Tuppence Middleton in the stylish but underwritten dramatic thriller Trap for Cinderella.

As the summer film festival season settles in, there were also three documentaries: Alex Gibney's bracingly lucid exploration of free speech in the WikiLeaks doc We Steal Secrets, a riveting biographical documentary about the uneven life and career of comedian Richard Pryor: Omit the Logic, and a heist-style doc Smash & Grab about Europe's notorious Pink Panther jewel-stealing gang. Finally, I also caught up with Bruno & Earlene Go to Vegas, a lively and gorgeously shot scrambled sexuality romp that has its world premiere in London next month.

This coming week we have Vince Vaughn and Owen Wilson in The Internship, Mike Figgis' mystery thriller Suspension of Disbelief, artist Jem Cohen's drama Museum Hours and the Mexican thriller Halley. Plus as many festival films as I can squeeze in - the Edinburgh International Film Festival kicks off Wednesday night, while London's East End Film Festival starts on Tuesday 25th June.

Requisite Blog Photo: Not so despicable 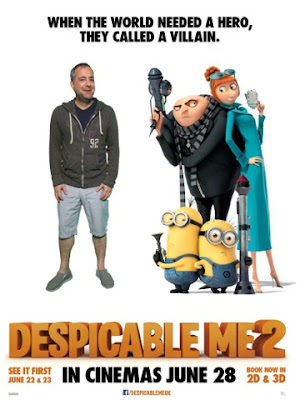 Marc Forster's long-awaited zombie apocalypse movie World War Z was shown to the UK press this past week, seemingly five years after Brad Pitt and crew were marauding around Britain filming it. The first half of the film is an excellent Contagion-style thriller, before things get rather ridiculous. The other most anxiously awaited movie was the prequel Monsters University, which traces Mike and Sulley's earlier days studying to be scarers. It's packed with snappy visual and verbal gags, although the plot races a bit too quickly. And the other big-name movie this week was Admission, starring Tina Fey and Paul Rudd. They're always excellent - I could watch them just sit and chat for two hours - and the film has some great dialog even if the plot isn't up to much.

Further from the mainstream, I caught Ulrich Seidl's second part in his trilogy, Paradise: Faith, an even more razor-sharp pitch-black comedy than Love. From Germany, Men to Kiss is a twisty gay romantic comedy that has it's moments of genuine emotion. The harrowing The Act of Killing documents the 1965 Malaysian massacres with an inventive twist that's utterly mind-spinning, while the almost unnervingly quiet Silence documents a sound recordist trying to escape human noise. And then there were two iconic oldies on the big screen: Elizabeth Taylor and Richard Burton in the pristinely restored studio-busting 1963 epic Cleopatra, and Alfred Hitchcock's Psycho at the BFI Southbank - perhaps the most iconic film ever made introduced by James Franco, who has a Psycho-themed art installation in London all summer.

This coming week features another very late-screening Warner Bros blockbuster: Man of Steel. We also have the animated sequel Despicable Me 2, Kristen Wiig in Girl Most Likely, Nicolas Cage in The Frozen Ground, and Iain Softley's Trap for Cinderella. I'm also currently planning exactly when I head up to Edinburgh for the film festival, which starts on June 19th.

In a very busy screening week in London, we finally caught up with the magician heist thriller Now You See Me, which starts as an enjoyable romp with a terrific cast (including Jesse Eisenberg, Mark Ruffalo, Michael Caine and Morgan Freeman) before turning very silly indeed. From here we move through the genres: romance came with Stuck in Love, a slick ensemble film (Greg Kinnear, Jennifer Connelly, Logan Lerman, Lily Cole) in which relationships are all very tidy; terror came from Ethan Hawke in the thoughtful and genuinely scary dystopic horror The Purge and the derivative but ultimately enjoyably nutty The Last Exorcism Part II; and topical thrills came from the oddly involving eco-terrorism drama The East and the darkly inventive human trafficking drama Eden.

Off the beaten path, we had the deeply charming coming-of-age drama The Year Dolly Parton Was My Mom, the controversially explicit but darkly thoughtful gay drama I Want Your Love, and Ulrich Seidl's chilling and blackly comical sex-tourism drama Paradise: Love. And finally, there were three docs: Sarah Polley's staggeringly inventive and moving exploration of her own family history in Stories We Tell, Shane Meadows' beautifully assembled exploration of a rock band in The Stone Roses: Made of Stone, and a somewhat indulgent but fascinating look at Johnny Cash's manager in My Father and the Man in Black.

This coming week we have Brad Pitt in the zombie blockbuster World War Z, the prequel Monsters University, Tina Fey in Admission, the second part of Ulrich Seidl's trilogy Paradise: Faith, the Indonesia massacre documentary The Act of Killing, Irish filmmaker Pat Collins' aural documentary Silence, a special BFI presentation by James Franco of Alfred Hitchcock's Psycho, and the lavish restoration of Elizabeth Taylor's Cleopatra up on the big screen where it belongs.