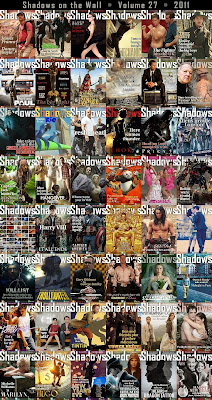 Yes, it's that time of year when I publish my rather ludicrous Shadows Awards - listing all of my best and worst of cinema for the past 12 months (or so). I've seen 507 films in 2011, and the year isn't quite finished yet. Here are my main winners - plus my worst of the year. The full lists, which do go on a bit, are HERE.

Meanwhile, you can also check out the nominees for two sets of awards I vote in - spot the differences!

Being the holidays, there aren't any press screenings this week, but I do have plenty of DVDs to watch! Screenings start up next Wednesday with Robert Pattinson's Bel Ami.
Posted by Rich Cline at 12:58 No comments:

Awards season is in full swing, with everyone announcing nominees, winners and top 10s of 2011. Indeed, just this morning the London Critics' Circle announced its 32nd film awards nominations. As secretary of the London film critics, my job was to count ballots and tabulate the nominees over the weekend, so it's great to get feedback today. Our best film nominees are: The Artist, Drive, A Separation,
Tinker Tailor Soldier Spy and The Tree of Life - and the other categories are just as strong (See the full list of nominees HERE). Casting final votes will be tricky. I'm voting this week for the Online Film Critics Society awards - those nominations are out next week.

Meanwhile, I've had a few final films to catch up with this past week, including David Fincher's astonishing remake of The Girl With the Dragon Tattoo, which is possibly a better film than the original. it's certainly sleeker and more eye-catching. There were two January releases: the thoroughly enjoyable Canadian hockey comedy Goon, starring Seann William Scott, and the Chemical Brothers' energetic concert movie Don't Think (that's their crowd pictured above). Finally, I caught up with three thoroughly awards-worthy films: Mexico's striking drama Miss Bala, the emotionally wrenching American soldier doc Hell and Back Again and the gorgeously made horse-whisperer doc Buck.

There are no press screenings now until the new year, so I'll spend the next two weeks re-watching some favourites on screener disc and catching up on old movies and other things I want to see. It'll of course be rather fabulous to watch movies for pure enjoyment for a change.
Posted by Rich Cline at 13:55 No comments:

The Muppets was one of my most-anticipated movies of the year, and then Disney pushed its UK release back to February. But they kindly screened it for London critics last week, and I was most impressed by the way it pulls us back into nostalgic hilarity. Of course, there were bigger films this past week, with much bigger titles: Tom Cruise in the outrageously exhilarating Mission: Impossible - Ghost Protocol, Robert Downey Jr in the wild and silly Sherlock Holmes: A Game of Shadows, and the hugely emotional 9/11 drama Extremely Loud & Incredibly Close, starring Tom Hanks and Sandra Bullock.

Smaller films included the delightful French period romance The Well-digger's Daughter, starring Daniel Auteuil (it's also his directing debut); the strikingly well filmed and edited documentary Bombay Beach, about a community seemingly living at the end of the world (even thought it's Southern California); and I also caught a rare screening of the 1991 TV drama Absolute Hell, a raucous look at post-War Soho life starring Judi Dench and Bill Nighy.

This coming week votes are due in both the London Critics' Circle Film Awards and the Online Film Critics Society awards. But I only have one more big movie to see: David Fincher's remake of The Girl With the Dragon Tattoo, which I'm seeing in just a couple of hours. I've also got a few trailing screenings, including the Canadian drama Goon, the Chemical Brothers' movie Don't Think and catch-up awards-consideration dates with Mexico's Miss Bala and the documentaries Hell and Back Again and Buck.
Posted by Rich Cline at 16:58 No comments:

Critical Week: A boy and his horse

This coming week we'll see a couple of blockbusters (Tom Cruise's Mission Impossible: Ghost Protocol and Robert Downey Jr's Sherlock Holmes: A Game of Shadows) as well as a major awards contender (Stephen Daldry's Extremely Loud & Incredibly Close). And there are also a couple of acclaimed documentaries to catch up with (Khordorkovsky and Bombay Beach).

It's also awards season, which means that DVD screeners are falling through my letter box every day. So far I've already seen all of the films (except for four American independent films I'd never even heard of before), but I'm sure there will be a few over the next couple of weeks that will help me catch up before voting deadlines.
Posted by Rich Cline at 10:19 No comments: 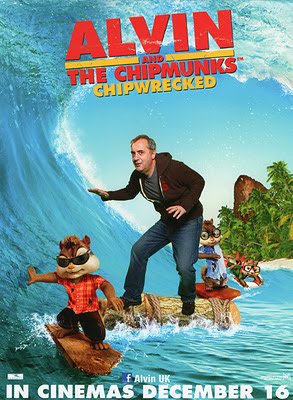 At a Saturday morning press screening, no one can hear you squeak...
Posted by Rich Cline at 13:18 1 comment: