UK critics were this week finally shown Clint Eastwood's new film Trouble With the Curve, and the delayed screening was probably due to the fact that baseball-themed films never do well here. The bigger problem though is that the film is only superficially dramatic and sentimental. More interesting was the overwrought and very dark British neighbourhood drama Broken, starring Tim Roth and Cillian Murphy. Speaking of overwrought, Bernard Rose's latest modernisation of Tolstoy starring Danny Huston is Boxing Day, a clever but relentlessly pushy drama.

Further off the beaten path was the American Christmas comedy Walk a Mile in My Pradas, with a clever variation on the body-swap genre as two men trade sexualities. It's too silly to say much, but is enjoyable enough. And there were two documentaries: a chilling exploration school-bullying in a beautifully made, heart-wrenching Bully, and the official film of the 2012 Olympics, First, which plays like a corporate promotional video but contains some genuinely inspiring stories.

This coming week I'll finally catch up with awards contender Life of Pi as well as the not-so-acclaimed The Man With the Iron Fists. And then there's the documentary Ballroom Dancer and the festival favourite Jiro Dreams of Sushi. Plus a few other things as they come....
Posted by Rich Cline at 14:04 No comments:

Critical Week: Smash it up

Press screenings for London critics this past week included Disney's energetic new animated comedy-adventure Wreck-it Ralph, which is already out in the US but won't open here until February. We also finally caught up with Chris Smith's astute Indian drama The Pool, which inexplicably took six years to reach UK cinemas; the hugely engaging Canadian comedy-drama Starbuck; the involving Oscar-nominated Belgian drama Bullhead (starring Rust & Bone's Matthias Schoenaerts); the hilarious micro-budget sci-fi comedy pastiche Codependent Lesbian Space Alien Seeks Same; and the dense and creepy Japanese horror X Game. And I actually bought a ticket to see Breaking Dawn: Part 2 at midnight last Thursday with a cinema full of teenagers and middle-aged women. The film is utterly bonkers - and more fun than the other four parts of the franchise put together.

This coming week, the screening schedule is still in flux. In the diary already are: Clint Eastwood in Trouble With the Curve, the acclaimed British indie Broken, the Muslim stand-up comedy drama Material, the school bullying doc Bully, and the indie Christmas comedy Walk a Mile in My Pradas.
Posted by Rich Cline at 18:12 1 comment:

Things continue to be a bit odd for London-based film critics at the moment, with a blinding combination of press screenings and awards-consideration screenings - all of which carry differing embargo rules. It's a minefield. The biggest film I saw this past week is also heavily embargoed, despite the fact that it's been in US cinemas for two weeks already. So even though there are more than 500 reviews online for Flight, starring Denzel Washington and directed by Robert Zemeckis, I can't tell you what I thought of the film until February. I also saw Colin Firth and Cameron Diaz in the funny but uneven Gambit; and the action-packed, visually thrilling animated action ensemble Rise of the Guardians.

Awards screenings this coming week include Judd Apatow's Knocked-up spin-off This Is 40, a rescheduled screening of Steven Spielberg's Lincoln and Gus Van Sant's reunion with Matt Damon in Promised Land. We also have the retro Disney animation Wreck-it Ralph, the Belgian award-winner Bullhead, the Canadian comedy-drama Starbuck, Chris Smith's Indian drama The Pool (made in 2007 and only just not getting a UK release), the 2012 Olympics doc First and the Japanese horror X Game.
Posted by Rich Cline at 20:59 No comments: 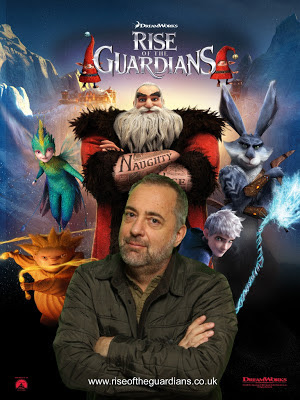 Early Sunday morning screening of a raucously engaging action movie; although it looks like I could have used more assistance from Sandman last night.
Posted by Rich Cline at 13:59 No comments:

Email ThisBlogThis!Share to TwitterShare to FacebookShare to Pinterest
Labels: rise of the guardians

It was an odd week for London critics, mainly because two major studios uninvited us from two very high-profile film screenings, saying we could watch them later because they had more important people they wanted to see the film (usually their friends and bloggers who are easily impressed by free movies so never say anything remotely critical about the film). This is happening with alarming regularity here, to the point where normal working journalists will not be allowed to see the final Twilight movie at all.

Anyway, the films we did see this past week were all off the beaten path, including the seriously offbeat (and slightly uneven) British black comedy May I Kill U starring Kevin Bishop (pictured), the clever and involving Norwegian comedy-drama Happy Happy, and the moody and moving Israeli sequel Yossi. There were also four docs: Hit So Hard is a lively exploration of drummer Patty Schemel's journey through drugs; We Are Legion energetically explores the hacktivist movement; McCullin follows the noted British photojournalist through a series of harrowing assignments; and Tempest is a rather fragmented look at an urban theatre group's take on Shakespeare.

This coming week, if we're not unvited, we'll be seeing Colin Firth in the Gambit remake, Denzel Washington in Flight, Daniel Day-Lewis in Lincoln, Toni Collette in Mental, Aaron Paul in Smashed, plus a few films with more than one word in the title: the animated ensemble adventure Rise of the Guardians, David Chase's 1960s drama Not Fade Away, and Luis Tosar in Sleep Tight.
Posted by Rich Cline at 21:34 No comments:

Email ThisBlogThis!Share to TwitterShare to FacebookShare to Pinterest
Labels: happy happy, hit so hard, kevin bishop, may i kill u, mccullin, patty schemel, tempest, we are legion, yossi

It's been an odd week of screenings for London critics, with a variety of offbeat movies that probably have very specific audiences. The starriest one was A Late Quartet, in which Philip Seymour Hoffman, Christopher Walker, Catherine Keener and Mark Ivanir play a long-time string quartet whose tenuous bond is shaken by a few unrelated events. It's beautifully made and acted, although a bit dull. And if you have a problem with actors pretending to play instruments, look away now. The other semi-mainstream offerings were the Halloween-themed Fun Size, a resolutely unfunny comedy romp, and the somewhat better For a Good Time, Call...,  an underdeveloped friendship comedy-drama. At least the films were livened up by Chelsea Handler and Justin Long, respectively.

Further afield, we had Shock Head Soul, an artful, ambitious but utterly impenetrable doc-drama about psychoanalysis, and London: The Modern Babylon, Julien Temple's dazzling look at the psyche of Londoners - it's utterly essential viewing for anyone interested in history or social culture. Or London, of course. And finally, I turned off all the lights in my flat and stayed in one evening all alone to rewatch Stanley Kubrick's The Shining, which is being reissued in UK cinemas this week. I hadn't seen it in 32 years, and it was even scarier than I remembered!

Next week is another random collection of screenings, including Anthony Hopkins as Hitchcock, the British black comedy May I Kill U, the long-awaited award-winning Romanian film Aurora, the Indian drama The Pool,the musician doc Hit So Hard, and the photojournalist doc McCullin.