Critical Week: King of the world

The final week of press screenings for 2013 brought us Martin Scorsese's barnstorming new comedy-drama The Wolf of Wall Street, which we saw just in time to vote (it got 4 nominations from the London Critics: film, actor, director and screenplay). It's a fiendishly entertaining, full-on romp. And it carries a strong punch. It seems cruel to compare it with the other big press show: Walking With Dinosaurs: The 3D Movie, which uses state-of-the-art technical and scientific skills and then adds one of the most inane, trite dialog tracks imaginable. For very young kids only.

Although it seems aimed at young kids, adults are likely to enjoy the French-German animated adventure Moon Man even more than the children. The sophisticated writing contrasts with simple but clever animation work. And there were also two docs: Penn and Teller explore the art world with Tim's Vermeer, the fascinating tale of an inventor who sets out to prove Vermeer's genius in an unexpected way. And How to Make Money Selling Drugs has garnered controversy for its sarcastic approach to America's disastrous war on drugs - but it's witty, telling and frighteningly important.

SHORTS ON TAP: This week I also participated as a juror for the second Shorts on Tap event, which this month was themed "Through Challenge and Change". We watched 11 short films, all introduced by their directors, who stuck around to answer questions. And we awarded our top 3 films to: 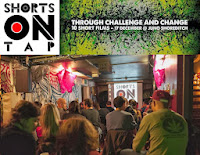 Beached by Graham Austin and Dave Walker: a witty romp set on a snowy beach, where a man and his dog find themselves in an unexpectedly twisty situation. It's especially well shot and played, with a terrific final shot. And it's even more impressive since it was filmed in one day.

Driftwood by James Webber: a gorgeously shot and edited story about a young swimmer who has a series of encounters that add to his stress levels in a variety of ways. The film expertly crosscuts between three scenes, building a sense of drama and suspense before turning in unexpected directions. Especially strong acting too.

I'm Christian Okoli by Cyrus Trafford: frankly this shouldn't work at all, as it's just one guy (Okoli) sitting on a stool on a stage telling a story. But he's a seriously great storyteller, and filmmaker Trafford keeps the camera prowling suggestively, adding impact to every element of Okoli's tale, which builds to an astonishingly strong final punch, literally and figuratively. It's very dark, but utterly unforgettable.

Honourable mention goes to Darren Bransford's Dust & Waltz, a beautifully made and skilfully brief short about a couple coping with a difficult situation, and Chris Lee and Paul Storrie's The Hedgehog, a surreal little exploration of a young boy and an older man, whose connection drifts from darkly whimsical to wrenchingly emotional. Shorts on Tap takes place monthly at Juno in Shoreditch.