It wasn't just another Critics' Circle ceremony for me: this year I was chair of the awards committee, so the whole evening was my baby. And it was odd to see every tiny detail I've agonised over for the past few months slot into place so nicely, despite some significant obstacles. We lost four nominee attendees at the last minute due to the snow (Tom Hooper) and the flu (Andrea Riseborough, Will Poulter and Jacqueline Durran), and others couldn't come because they were working far, far away. But everyone who made it had a great night. 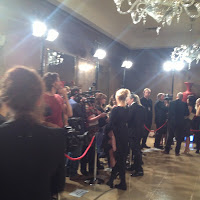 The day started on Sunday morning as I looked out the window to see snow falling. It's been a snowy week in London, with the usual travel chaos any change in the weather brings. But we were in motion, and couldn't be stopped. I headed from home via replacement bus (my Tube line was helpfully closed) to the May Fair Hotel in Mayfair, where the production team ran through the show in the theatre at noon. Then there were fine-tuning adjustments, printing up the winners cards for the envelopes, collating the speeches from those who couldn't be there to accept their award, and of course changing into our finery for the show. The critics who were presenting awards arrived at 5pm to run through their parts of the presentation with our host Richard Herring (who has blogged brilliantly about his experience).

By 5.30pm the first attendees were assembling on the red carpet and facing the press line. The cameramen of course latched on to the glamorous women, including Helena Bonham Carter (recipient of our top honour, the Dilys Powell Award for Excellence in Film), Emily Blunt (nominee for British Actress), Samantha Barks (nominee for Young Performer) and Olivia Colman (last year's British Actress winner, who generously came to help me present the award this year). 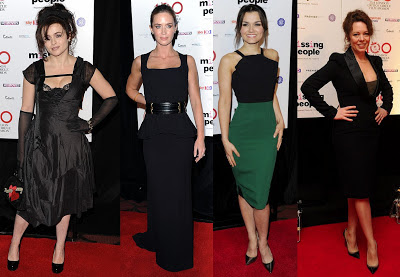 Also very popular with the press was young Jack Reynor, nominated as Young Performer, who has just been named as the star of Transformers 4. He had a great night, knowing he was heading home to Dublin in the morning to begin four months of physical training for the film. Although I told him he really needs to take a break to celebrate his 21st birthday this week! 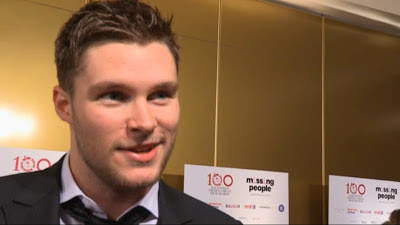 I had a chance to talk to all of our special guests as they arrived, including Ben Drew (nominated for Ill Manors), Charlie Creed-Miles and Dexter Fletcher (nominatees for Wild Bill), and three nominees from the superb British film My Brother the Devil: writer-director Sally El Hosaini, actor Fady Elsayed and cinematographer David Raedeker. At 6.30pm the champagne reception was shifted into the theatre for the awards ceremony, which clipped along thanks to Richard Herring's snappy hosting. Several early winners weren't present: Anne Hathaway's Supporting Actress award was accepted by Les Miserables producer Debra Hayward, and Philip Seymour Hoffman was unable to be here to get his Supporting Actor award, Emmannuelle Riva sent a lovely video message from Paris to accept Actress, and Joaquin Phoenix wrote the thank-you note of the night* to accept Actor. 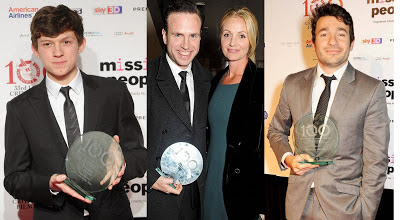 But most of the British winners were on hand to collect their prizes. Above: The Impossible's Tom Holland with his Young Performer trophy, Rafe Spall turned up to accept the Director award for his Life of Pi director Ang Lee, and The Imposter's Bart Layton took home the award for Documentary. Below: Alice Lowe and Steve Oram were multiple nominees for British Actress and British Actor, and won Breakthrough Filmmaker for their Sightseers script. 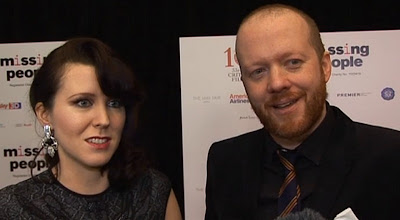 Andrea Riseborough won the British Actress award, which I presented, but she'd had to cancel her attendance at the last minute due to illness. So last year's winner Olivia Colman accepted the award and read a message from her. Toby Jones (below) won the British Actor award, and then came back to the stage with sound designer Stevie Haywood (a Technical Achievement nominee) to claim British Film of the Year for Berberian Sound Studio. 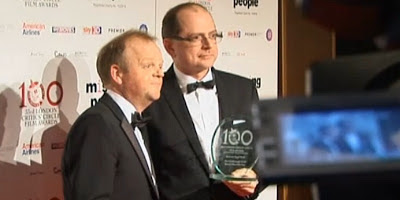 There was a warm acceptance video from Bill Westenhofer, who won Technical Achievement for the visual effects in Life of Pi. And Michael Haneke sent two thank-you videos - accepting his awards for Screenplay and Film of the Year for Amour. He's in Madrid at the moment staging a version of Cosi Fan Tutte. 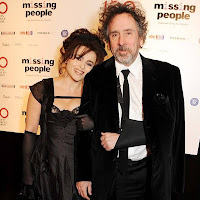 The highlight of the evening was Mike Newell presenting the Dilys to Helena Bonham Carter: "She's like a kaleidoscope, she is able to deliver these wonderful, vivid characters again and again. They're all full of variety, full of wit and energy and I think people long to see what she's going to try next. She's become an institution. Working with her is always surprising, always harmonious. Not one tiny little bit of foot-stamping or tantrum-throwing."

Her speech was hilariously witty, warm and honest, and she later told the press: "It feels like a rash. It suddenly seems like I've got a contagion of diseases - I mean awards! But it's nice, it's a nice feeling. It's so weird, because I'm only 46. A lifetime achievement award - it feels like 'I'm not over yet'. I hope they're not trying to say it's time to stop. I'm only just getting the gist of it." She clearly had a great evening, and she and Tim Burton were among the last to leave, happily chatting to everyone throughout the after party. I left shortly after them, sharing a cab through the snowy streets to North London with fellow critic and awards committee member Pauline McLeod (that's us below). 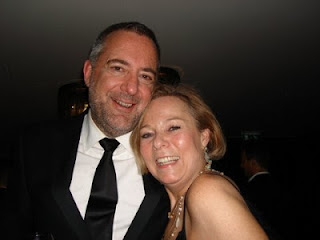 I didn't open my goody bag until this morning - quite a haul! I need to thank our charity partner Missing People and our amazing sponsors for making this happen. And now I feel like I need a holiday before I start thinking about 2014.... 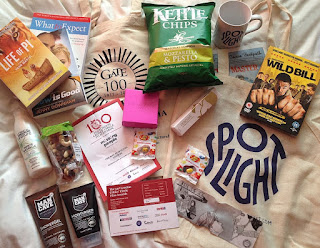 I struggle with the idea of winning awards for acting. Stating I'm the best actor for something as subjective as film seems strange to me. To the uninitiated it implies I am solely responsible for the creation and implementation of the character. I am not.

I suppose that's why we thank our colleagues. There are those who you all know such as Paul Thomas Anderson to whom I am eternally grateful. A man who is persistent in his search for his truth. I am fortunate to have been under his guidance. Philip Seymour Hoffman for his patience and advice. Amy Adams for being angry.

Megan Ellison and everyone at Annapurna for their support of film and ensuring I was able to cover my mortgage. But there are many others who you do not know by name such as Mike Kenner, who I believe was the grip but he did 20 different jobs so I can't be sure; Adam Somner the 1st assistant director; Karen Ramirez in the office; Tommy, I don't know your last name; Demelza Cronin. There are too many to list.

The truth is you cannot separate my work from theirs. We were a unit bolstered by the same goal: To do our part in helping Paul to achieve his vision.

I view this award as a recognition of all of our work. I am very cognisant of the fact that for me this award is encouragement to continue my lifelong passion of being an actor. I will not squander this high regard.

P.S. there's an up and coming actor named Daniel who's in a movie called Lincoln. You should check it out. He's mesmerizing.