Oscar voters scattered awards around among the year's top films last night, leaving smiles on the winners' faces and confounding those who tried to predict how it would all go. I only guessed 15 of 24 awards, which wasn't too bad on a night like this. As expected Daniel Day-Lewis, Jennifer Lawrence and Anne Hathaway took Actor, Actress and Supporting Actress, with the night's trickiest major category, Supporting Actor, going to Christoph Waltz. When the dust settled, Ang Lee walked off with Director, while Ben Affleck and George Clooney also added Oscars to their mantlepiece as producers of Best Picture Argo. The film's entire team took to the stage to celebrate.

Seth MacFarlane hosted the event and had some good lines, although his opening sequence was more than a little chaotic, with the spectral appearance of Captain Kirk William Shatner and a couple of song and dance numbers (he's centre top-right with Joseph Gordon-Levitt and Daniel Radcliffe), including a rather amusing misogynistic ditty called We Saw Your Boobs. Looking nervous, he peppered the show with a wide variety of gags, which continued through the night, sometimes funny, sometimes eliciting shocked gasps (a John Wilkes Booth joke) and sometimes taking a little too long to get to the punchline (a hilariously absurd Sound of Music gag). 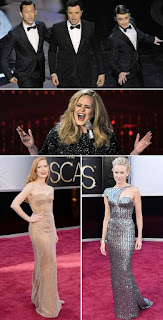 Music dominated the ceremony, which was a nice change from recent all-business years. Three Oscared musicals from the past 10 years - Chicago, Dreamgirls and Les Miserables - recreated big moments on-stage, but the most memorable numbers were performed by Shirley Bassey (Goldfinger in the Bond tribute), Barbra Streisand (The Way We Were in the In Memoriam sequence) and Adele (middle-right) belting her soon-to-win Bond theme Skyfall.
Best and worst dressed were Jessica Chastain and Naomi Watts, respectively (bottom-right). Daniel Day Lewis' delivered by far the best acceptance speech - let him host next year! And memorable moments included Jennifer Lawrence stumbling up the steps in her massive dress, the insane pairing of Charlize Theron and Dustin Hoffman to hand out the screenwriting awards, a shambolic appearance by most of The Avengers, and Michelle Obama joining Jack Nicholson by video link to present Best Picture.

~~~~~~~ ~~ ~~~ ~~~~
CRITICAL WEEK:
It's been a busy week here in London, as we caught up with a few big-name titles, including Steven Soderbergh's Side Effects, which pleasantly surprised us by shifting from a pharmaceutical drama into a trashy thriller as it went along. Jason Statham and Jennifer Lopez brought their distinctly enjoyable personas to the blunt action thriller Parker, Richard Gere had a chance to shine as a beleaguered banker in Arbitrage, and Dominic Cooper and Dan Stevens fought over Emily Browning in the true period drama Summer in February. And I also caught up with the fifth Oscar-nominated doc How to Survive a Plague just before the ceremony on Sunday. It's a serious stunner - essential viewing.

We also had the launch event for the British Film Institute's 27th London Lesbian & Gay Film Festival, which was a terrific party as always. I've been catching up with some of the films in advance of the festival 14-24 March, including the hugely entertaining opening night documentary I Am Divine, the engaging closing night Canadian comedy-drama Margarita, the American romance I Do, the Korean odyssey White Night and Joy! Portrait of a Nun, a freeform doc about one of the Sisters of Perpetual Indulgence.

Coming this week: Ryan Gosling and Bradley Cooper in The Place Beyond the Pines, James Franco and Mila Kunis in Oz the Great and Powerful, Josh Duhamel and Rosario Dawson in Fire With Fire, the Icelandic shipwreck thriller The Deep and the French biopic Renoir. Plus several more LLGFF titles.
Posted by Rich Cline at 06:30