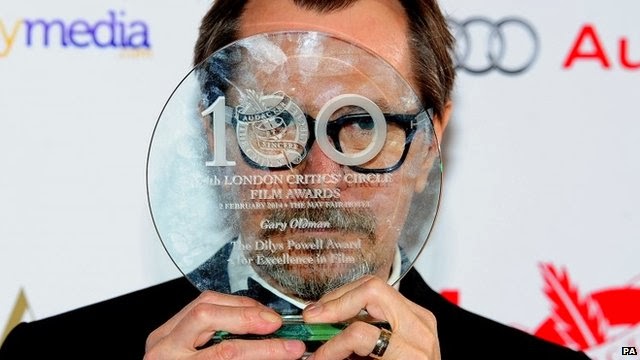 It's always my most glamorous night of the year, but Sunday night's 34th London Critics' Circle Film Awards was also the biggest event I've ever organised and hosted myself, with a lot of help of course. This was my second year as chair of the organising committee, but we had some extra challenges that added a lot more work than ever before - and we pulled a fabulous evening out of thin air thanks to the hard working committee, our generous sponsors (The May Fair Hotel, Beluga Vodka, Audi, Cameo, Novikov, Innerplace and Publicity Media) and press management from DDA.

Somehow my committee convinced me to host the ceremony - I've never done anything like that either! It was pretty daunting, especially since it was about 15 minutes before the ceremony started when the news was confirmed about the death in New York of Philip Seymour Hoffman, our best supporting actor last year. So Critics' Circle Film Section Chair Jason Solomons adjusted his opening monolog accordingly - the audience broke in to a spontaneous standing ovation. And after that it was good to celebrate the best in cinema in 2013 together. We opened with a terrific video compilation of the films of the year, then my job was to thank everyone, then keep things moving.

And the first award in our running order was Supporting Actor, won by Barkhad Abdi, who was attending with his director Paul Greengrass (two of the nominees you can see in the photo above). Supporting Actress went to Lupita Nyong'o, who was unable to attend, so her director Steve McQueen (left) read a statement from her to accept. Then the Technical Achievement Award went to Tim Webber (right) for the visual effects in Gravity. 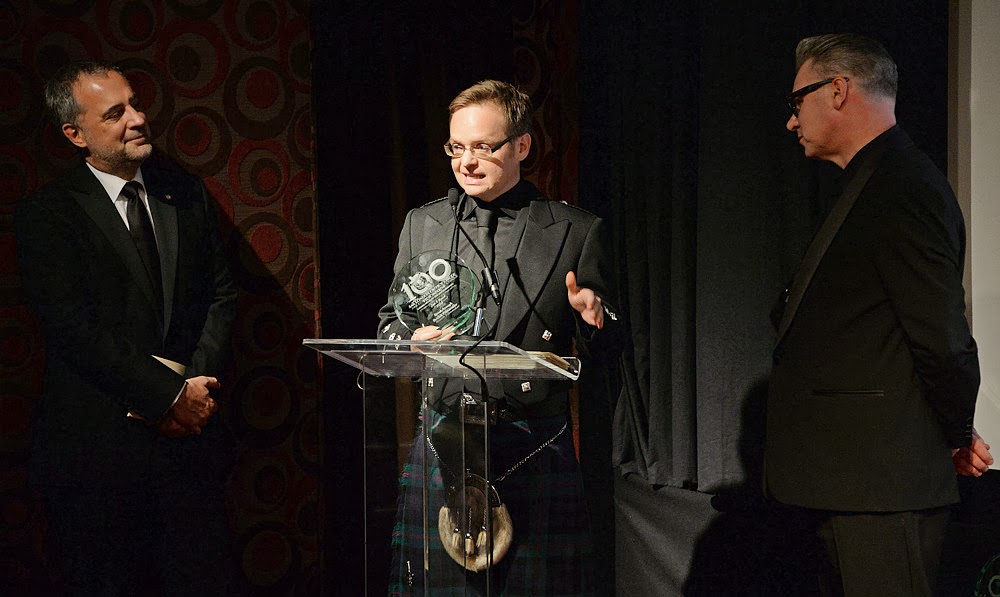 Here we shifted into our British awards, starting with Breakthrough British Filmmaker, which went to Filth director Jon S Baird, who collected his trophy from Mark Kermode and me (above).

After a montage of British films and performances, we presented Young British Performer to Conner Chapman, who brought his costar (and fellow nominee) Shaun Thomas on-stage with him. British Actor went to James McAvoy, who was in another part of London filming Frankenstein and sent a video thank you (top right) - his award was accepted by his Filth director Jon Baird. British Actress was won by Judi Dench, who sent a video thank you from India, where she's filming The Best Exotic Marigold Hotel 2 - her award was accepted by her Philomena costar and writer Steve Coogan. And finally, British Film of the Year went to The Selfish Giant. Director Clio Barnard, producer Tracy O'Riordan and cast members Conner Chapman, Shaun Thomas and Lorraine Ashbourne all took to the stage - presenter Tim Robey and I are there too (below). 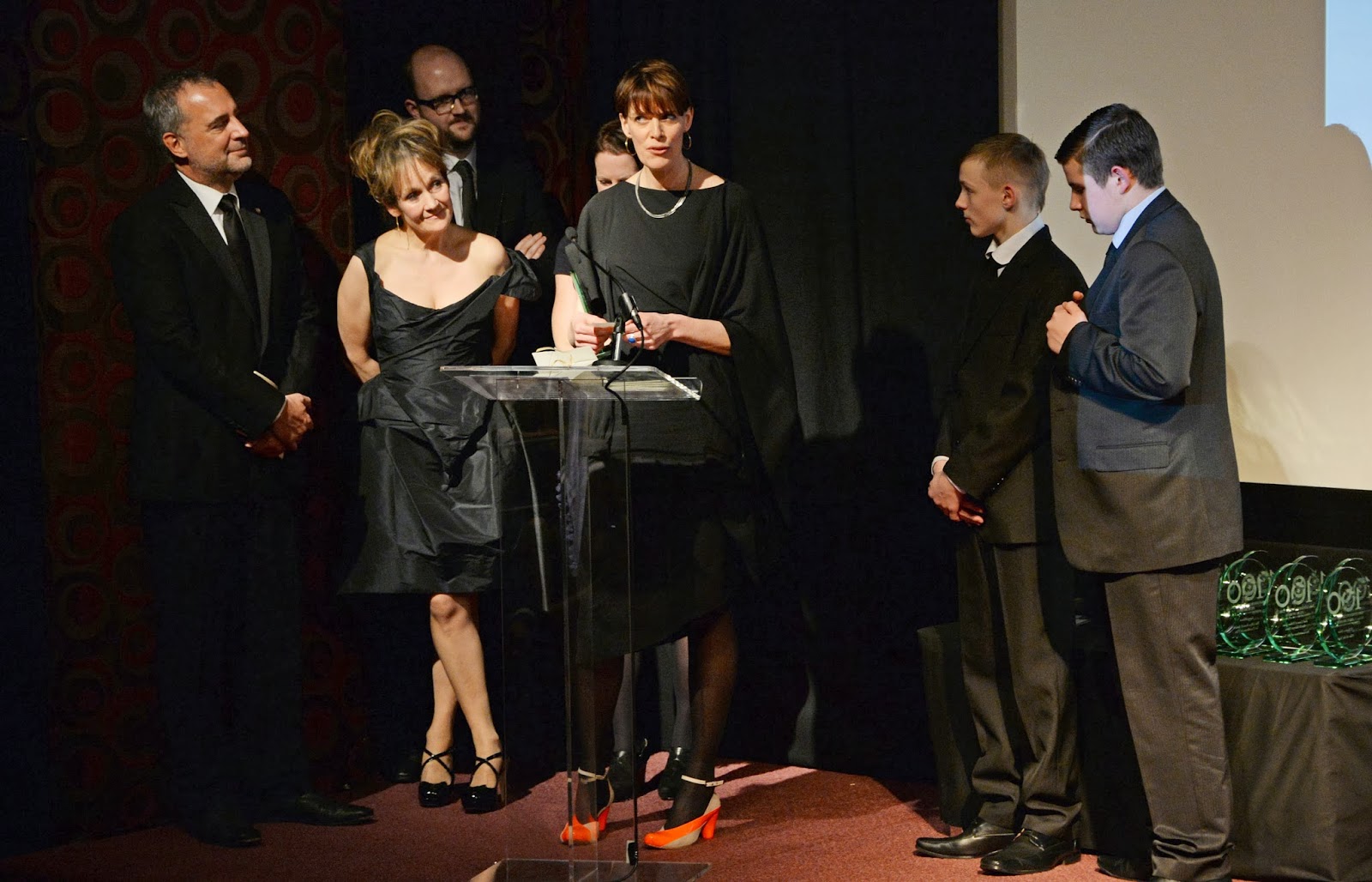 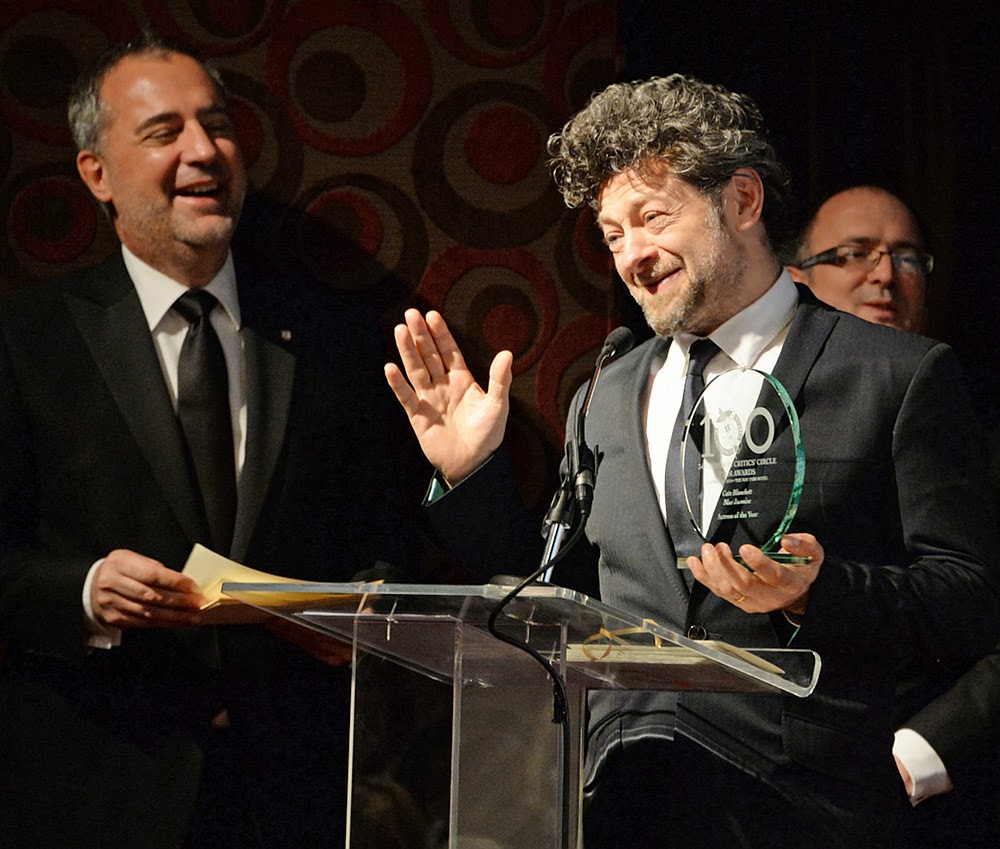 Next up was Actress of the Year, which was won unsurprisingly by Cate Blanchett. She sent a hilarious thank you message, which was read out by her Middle Earth costar Andy Serkis (right with presenter Roger Clarke and me). Actor of the Year was also no surprise, going to Chiwetel Ejiofor. He sent a written thank you from New Zealand, where he's currently filming. Then Documentary of the Year went to The Act of Killing, which was accepted by producer Andre Gregory (photo below), who read a statement from director Joshua Oppenheimer about the ongoing issues in Indonesia. 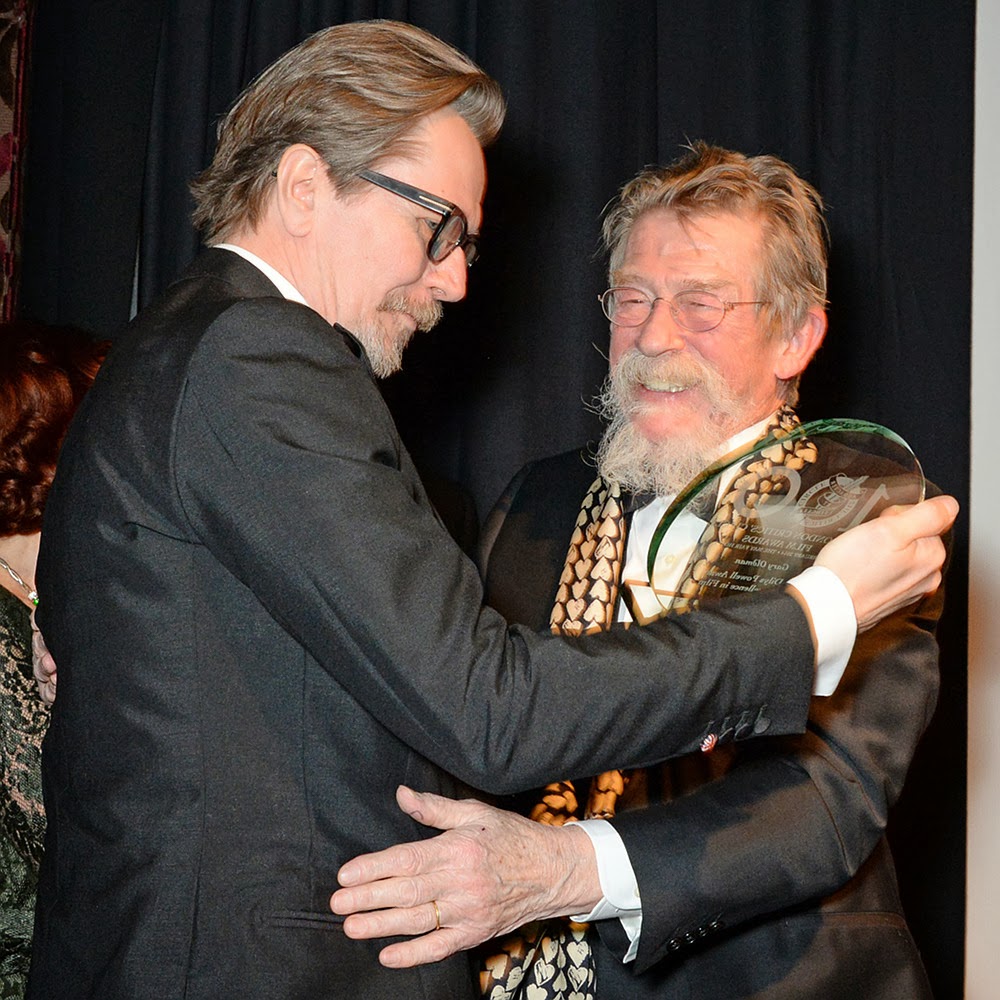 And now it was time for our biggest honour, the Dilys Powell Award for Excellence in Film, which this year went to Gary Oldman. John Hurt (right) was on give a lovely introduction speech and introduce a clip-reel of Gary's best work, followed by a emotive and eloquent thank you from Gary. And lots of hugging.

Next up was Foreign-Language Film of the Year, which was won by Blue Is the Warmest Colour and accepted by an executive from the UK distributor Artificial Eye. Screenwriter of the Year was won by Joel & Ethan Coen, who weren't in attendance. So presenter David Gritten and I, with the help of committee members Pauline McLeod and Hilary Oliver, concocted a rather silly sketch in which the film's feline star Ulysses appeared on-stage to claim the award. Director of the Year went to Alfonso Cuaron, who sent us a video from Italy (pictured above with James and Judi). And finally it was time for Film of the Year, which went to 12 Years a Slave and was collected by Steve McQueen with a lovely speech.

And then it was on to the afterparty with Beluga Vodka cocktails at Novikov, where nominees and winners, as well as the critics and guests mixed in unexpected circles late into the night. I had a particularly nice chat with Howard Cummings, nominated for his Behind the Candelabra production design. And from the below evidence, will we see Barkhad Abdi in Steve McQueen's next movie ... or Andy Serkis in Paul Greengrass'? 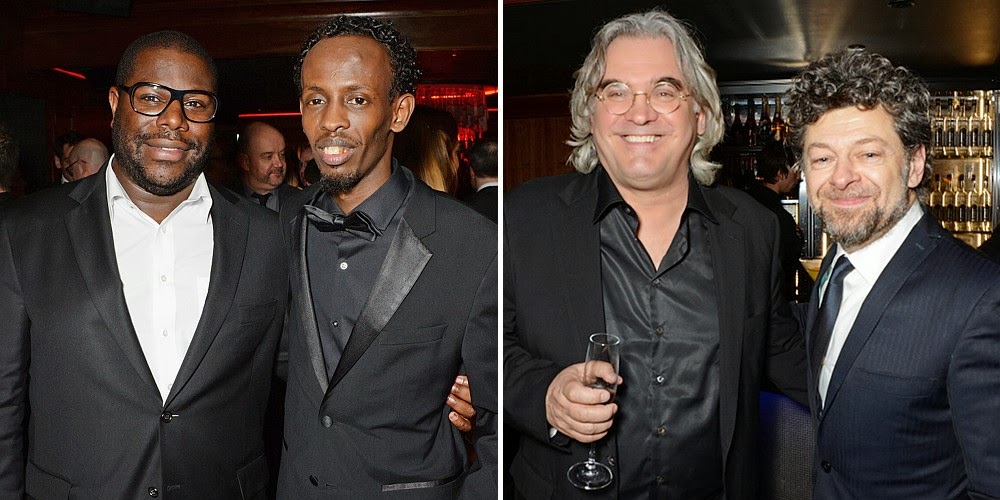 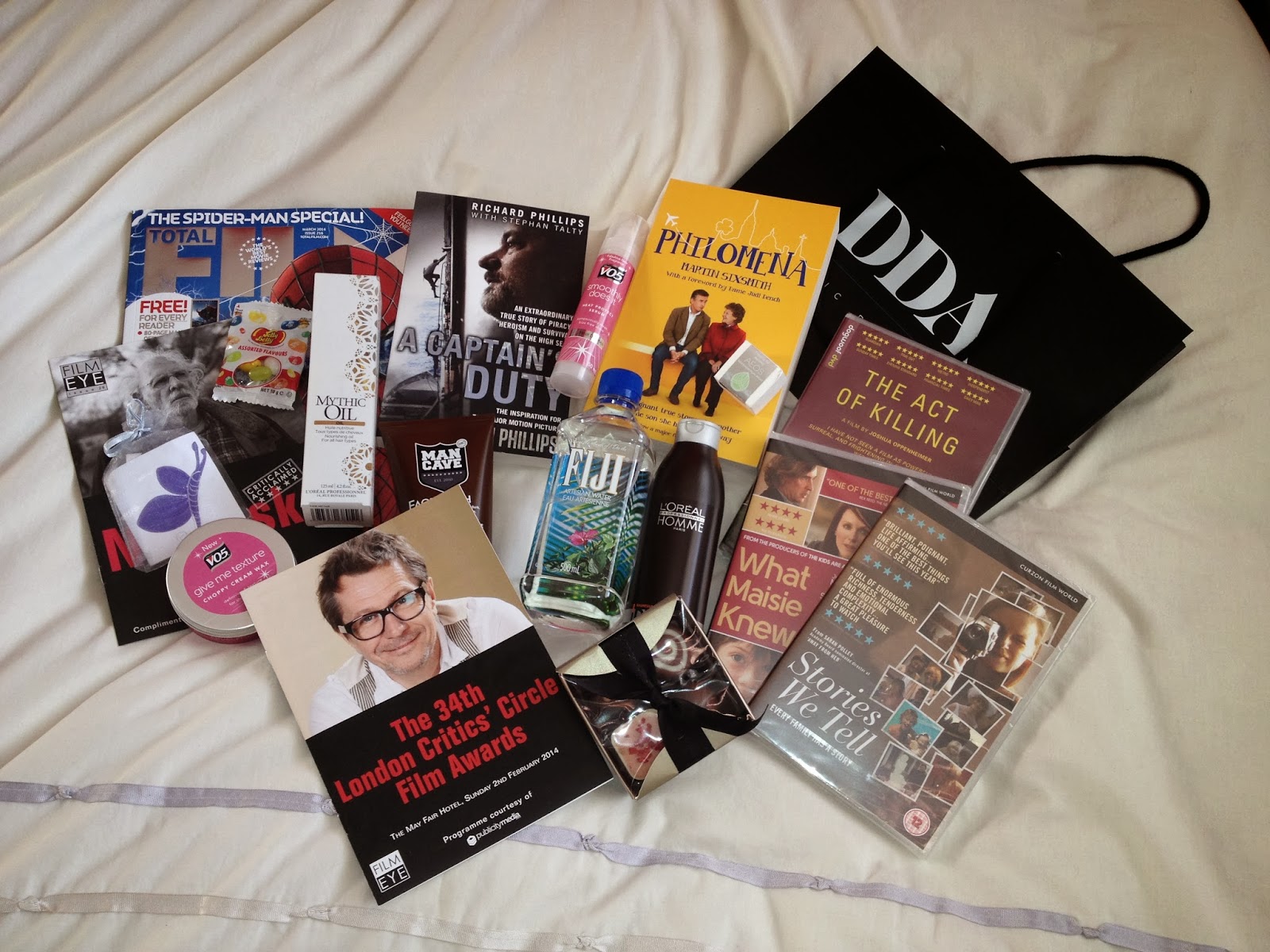 Of course, things wrapped up with our now-legendary goody bags (that's mine to the right), thanks to our diligent committee members and some more generous sponsors. Here are a few more photos - of our two most glamorous red carpet stars, nominees Naomie Harris and Lindsay Duncan, and of nominee George MacKay, winner Andre Singer and Reece Shearsmith, star of nominated film A Field in England. 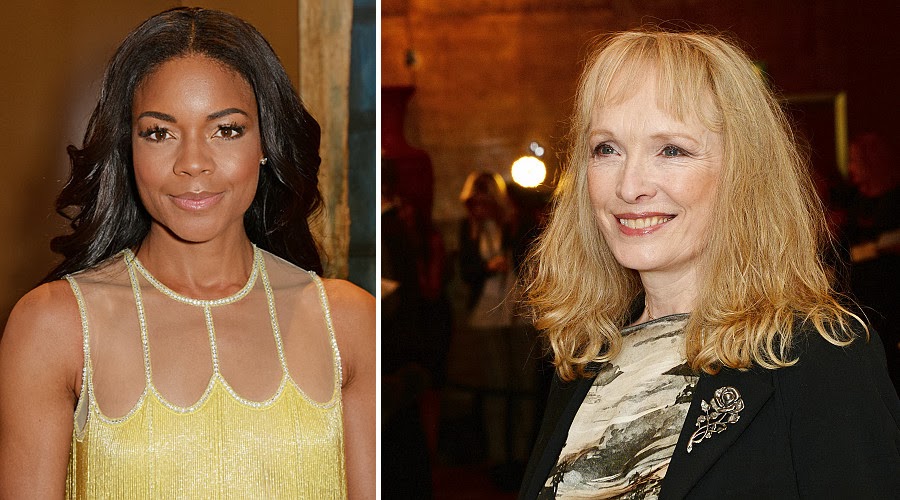 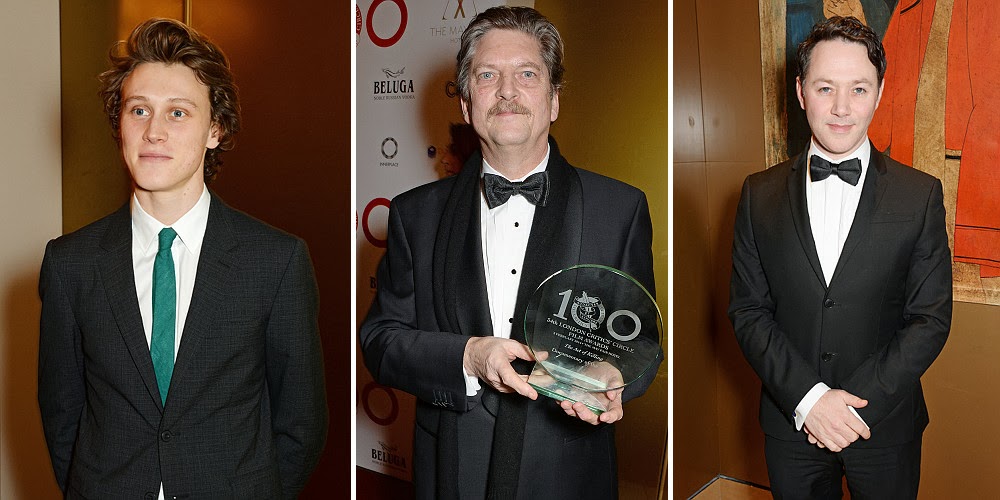 And finally, because it has to be done, Knowing Me Rich Cline, Knowing You Steve Coogan. Aha.... 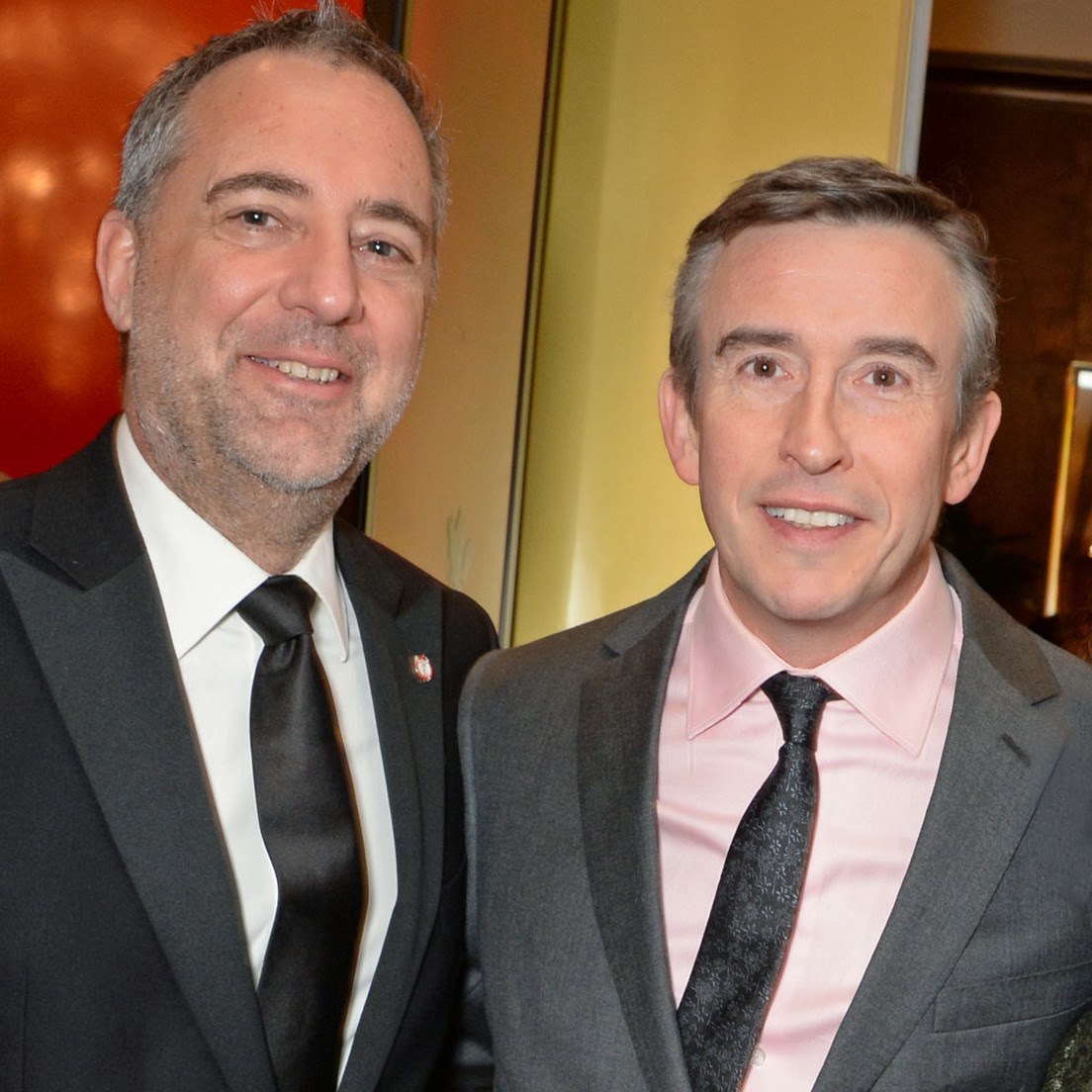 Photos by Dave Bennett
Posted by Rich Cline at 12:02