Shadows on the Stage: Not as silly as they look

Two fringe theatre shows in London this month approach the gay scene from intriguing angles, making some important observations while entertaining audiences with a lot of camp excess...

Cleverly grappling with issues of masculinity and identity, this astute play is a riot of colour, lights and music. It's a lot of camp fun, but it's gags are hilariously pointed, so a serious undercurrent catches the audience off-guard with genuinely important observations. Performed all around the audience in a room encased in glitter, this play turns out to be even more immersive than it looks. 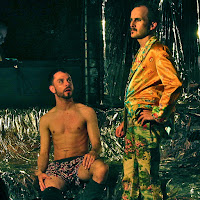 The story centres on Sam (Paul Duncan), the new barman at a fading Soho nightclub, where the manager Benjamin (Arkem Walton) is seriously considering an offer from a developer (Matthew Hodson) to turn the building into tiny expensive flats. The star performer is the worn-out drag queen Ibiza Chilltape (James Ferguson), while Kylie fanatic JJ (Richard Watkins) keeps the place humming. There are instant sparks between Sam and JJ, who decides that he needs to be more masculine. But of course, real masculinity isn't about how he behaves on the surface.

Where this goes is surprising, especially with some deeply moving moments interspersed between the glittering karaoke performances and sassy interaction. Yes, much of the show is uber-arch, and the drag costumes couldn't be much more trashy if they tried. But each of the actors finds some real resonance along the way. Duncan is particularly strong (as an actor, singer and dancer), and creates a vivid central character to carry the story. Flyte is the scene-stealer in a series of roles from Sam's concerned mum to his guardian angel Mariah.

But perhaps the most important thing about this show is what it has to say about pop music, exploring the reason why the gay community has embraced icons like Madonna, Cher and Kylie, and the deeper role of pop to define a subculture. The show also has a lot to say about the shifting image of men both in society at large and on the gay scene. But most impressive of all is how the cast and crew make it so much fun that you'll want to get up and dance with them at the end.

There's a nice edge to this silly musical, both in some sharp observations and some darker story elements. So it's a bit of a shame that the plot kind of goes up in smoke in the final act, never making anything of the deeper themes gurgling around in the story. This may have been designed to be little more than a fluffy musical comedy about young men taking their clothes off, but a bit of depth would have given the show a nice kick. 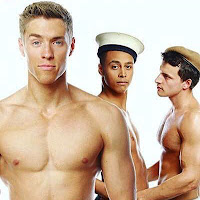 It's set in a fading Croyden bar, where the manager Quinny (Dereck Walker) is also a high-energy drag queen hostess. The big question is how to get people through the doors on a Monday, and he comes up with the idea of running an amateur strip night, enlisting local boys Ricky and Milosh (Ashley Daniels and Michael Nelson), closeted professor Brian (Stuart Harris) and his student Mitch (Joe Goldie), plus straight builder Luke (Tom Bowen) as a ringer. Their goal is to put together a convincing act for a big competition that will boost the bar's reputation.

Smaller dramas involving the characters add some interest, including a few gentle romantic connections that are complicated by, for example, the fact that Ricky has an often-absent boyfriend (one of David Michael Hands' many terrific side roles). And the dialog is packed with clever observations about how things like drag shows and strip nights give confidence and joy to a marginalised community. John Bradfield's songs are witty and enjoyable, performed with loads energy and talent by the likeable cast.

Where things begin to wobble is in a general prudishness that creeps in. Even a show-stopping song about the importance of the full monty is staged so coyly that it's almost embarrassing. There is some partial nudity later on, as well as a brief Full Monty style flash, but by then the overall attitude is clear: director Robert McWhir is afraid of appealing to audience prurience. But it's not about nakedness; the show strains to avoid being sexy, so it never feels true. So what's left is a funny, engaging musical that never quite cracks the surface. Which might be all the audiences are looking for. But wouldn't it have been nice to give them more?