Some personal comments are required this morning. I stayed up most of last night watching election results roll in from my home country, in disbelief at how it progressed: the majority of US voters have officially said that it's ok to be a white supremacist, a person who assaults women, or someone who hates people based on their gender, economic status, sexuality or ethnicity. This is a vote for hatred, division and inequality that effectively ends centuries of diplomacy and social progress. Although how that plays out is yet to be scene. After the banks crushed the world economy nearly 10 years ago, I knew a revolution was coming, but I never saw it going this way. In just the past few months, for example, voters in the Philippines have affirmed government-condoned vigilante violence and Colombia's people voted against peace there, plus of course the UK's referendum on the European Union, which has tripled the incidence of hate crimes across Britain. Anti-migrant sentiment is rife all over the world, even though every single bit of evidence points to immigrants as adding to society, never draining it. But then facts and compassion don't matter any more. My slim hope is that the rhetoric of the campaign season will be replaced by something more positive and rational. But I won't put my head in the sand.

So back to movies! It's perhaps appropriate that the biggest movie screened to London-based critics this week was Denial, a razor-sharp true drama starring Rachel Weisz, Timothy Spall and Tom Wilkinson about a Holocaust denier challenged in a London court. It's powerfully well-made, and a riveting film. Lighter fare included the amusing, enjoyable backstage Broadway musical-comedy Opening Night, starring Topher Grace and Anne Heche; the multi-strand holiday comedy Shared Rooms, a slightly clunky film with some nice touches; and the quietly moving Canadian indigenous drama Fire Song. And there was also the opening movie at the London Korean Film Festival (3-27 Nov)... 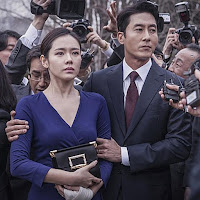 The Truth Beneath
dir-scr Lee Kyoung-mi; with Son Ye-jin, Kim Ju-hyuk 16/Kor ***.
Korean filmmaker Lee Yyoung-mi takes an unusual approach to the usual mystery thriller, getting under the skin of her central character while bringing out the inherent corruption in politics. The result is a tangled story that twists and turns, but keeps its focus on the internal shifts in attitude rather than the big surprises. And there are plenty of those. So even if the filmmaking is sometimes deliberately tricky, this is a slick, sharp and thoroughly gripping drama.

Coming up this week, I have the Harry Potter prequel Fantastic Beasts and Where to Find Them, Ewan McGregor's directing debut American Pastoral, Miles Teller in Bleed for This and the Argentine drama Esteros. There are also awards-consideration screenings of Warren Beatty's Howard Hughes romance Rules Don't Apply and Joel Edgerton in the civil rights drama Loving.