London critics caught up with Martin Scorsese's new film Silence  this past week. It's a strikingly thoughtful movie, a quest for faith for Portuguese priests in 17th century Japan - a bit academic perhaps, but powerful. And then there's the biggest movie of the year: Gareth Edwards' stand-alone Star Wars story Rogue One, which is a startlingly edgy war thriller with complex characters and situations that don't go as expected. It's a properly grown-up movie unafraid to embrace its darker elements.

There were two starry year-end dramas: Taraji P Henson and Octavia Spencer lead the ensemble in Hidden Figures, about the women whose mathematics expertise got Nasa into space in the early 1960s. And Michael Keaton stars in The Founder, about McDonald's ruthless entrepreneur Ray Kroc. Both films are solidly made, finely acted and worthy of acclaim, if not actual Oscars.

Further afield, The White King is a strikingly well-made dystopian thriller with a somewhat murky plot; The Eyes of My Mother is an inventively harrowing monochrome drama with elements of grisly horror; and London Town is an enjoyable riff on the music scene of the late 1970s. I also watched the rather uneven TV spectacular Hairspray Live!, which had a great cast but struggled to maintain this fantastic musical's energy levels. And there were two films I hadn't covered on their UK releases... 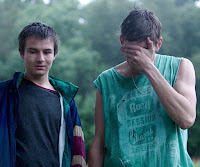 Chicken
dir Joe Stephenson; scr Chris New; with Scott Chambers, Yasmin Paige, Morgan Watkins 15/UK ***.
Based on the Freddie Machin play, this British indie drama tells a very dark story in a remarkably breezy way. It's a skilful feature directing debut for Joe Stephenson, anchored by fierce performances from the three main cast members. The story centres on Richard (Chambers), a mentally disabled 15-year-old whose best pal is a chicken named Fiona. He lives in a caravan in a field with his big brother Polly (Watkins), a hothead who simply can't hold his temper long enough to keep a job. Then new landowners arrive, threatening their already fragile existence. And Richard befriends their annoyed daughter Annabell (Paige). The shifting dynamics between the characters are fascinating, helping add some deeper feelings to a rather gimmicky plot. In the end, the twists and revelations are so big that they leave the film feeling oddly distant. But it's still powerful stuff, beautifully written, directed and acted. 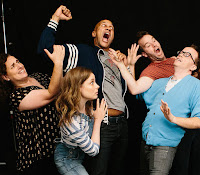 Don't Think Twice
dir-scr Mike Birbiglia
with Gillian Jacobs, Keegan-Michael Key, Mike Birbiglia, Chris Gethard, Kate Micucci, Tami Sagher 16/US ***
Not only is this a serious drama about comedy, but it's also a scripted story about improv, and both of these things make the film difficult to go along with. The central theme is a strongly involving one, that this six-person improvisational team is like a family that has a strong bond even as circumstances pull them apart. When one member (Key) gets his break on a live TV show and their theatre faces closure, all of them are forced to reconsider their career and life choices. Most of this is a little simplistic, but it's very nicely played by likeable actors who bring out strong details in their roles. And some clever cameos and side roles add a bit of spice here and there. Definitely worth a look for anyone interested in the rather grim realities of life as a comedian, but not great if you're looking for a laugh.