Critical Week: In the shadows

I only saw two movies this week - but then I am on holiday at the moment! Dane DeHaan stars in A Cure for Wellness, an overlong, visually sumptuous horror thriller set in a Swiss sanatorium where something nasty is going on underwater. Alas, the script simplifies things rather than deepening them over two and a half hours. More enjoyable is the Matt Damon romp The Great Wall, a big East-meets-West action adventure blending mythology with history. Silly and over-reliant on digital effects, but entertaining.


On Saturday, since I'm in Los Angeles, I was able to attend the Dorian Awards winner's toast at The Pikey on Sunset Blvd. I'm a voting member of Galeca, which hands out the prizes, but I'd never attended the event. It's a casual, lively gathering featuring champagne and frites, and I enjoyed a chance to interact with other critics as well as the winners and special guests. Here are some pics... 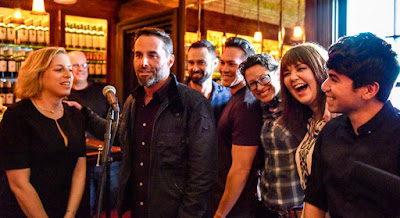 The creators, writers and cast of The Real O'Neals turned up to collect their award for Unsung TV Show of the Year.

Left to right: actress Amy Landecker picked up the award for Transparent as TV Comedy, Michelle Visage collected the prize for RuPaul''s Drag Race All Stars as Campy TV Show, and producer Ashley Golden was presented the award for Full Frontal With Samantha Bee as TV Current Affairs Show of the Year. 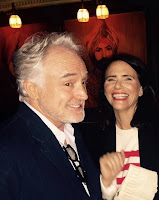 The event was unusually relaxed, allowing for some terrific rambling conversations, photo ops and lots of laughter. A highlight for me was getting to meet Bradley Whitford (right with his partner Landecker) and having a lengthy friendly drunken political rant about Trump and climate change issues. Exactly the kind of conversation you'd want to have with Whitford! Of course, now I want to plan a trip back to LA every year to coincide with this event.

See the full list of Galeca nominees and winners.

Movies opening here in the USA this weekend that look interesting include Jordan Peele's offbeat horror Get Out and the Nicholas Hoult thriller Collide. Hopefully I'll have time to see one of them this weekend, along with watching the Oscars on Sunday at a normal hour (as opposed to the live 1am to 6am in London). And then it's back to London on Monday!
Posted by Rich Cline at 15:31