Films were a little more low-key this week, as studios continue their current trend of simply not screening the biggest releases (including Geostorm, The Lego Ninjago Movie, The Snowman, Flatliners, Kingsman: The Golden Circle, the forthcoming A Bad Moms Christmas). With some of these, I buy a ticket to see the movie so I can review it. Others I skip even though they feature favourite actors and filmmakers (perhaps I can catch up with The Mountain Between Us on a flight). Either way, it's rather frustrating that distributors are now telling us how to do our job, and sometimes forcing us to lose paying work. Basically, they have forgotten that we are part of the industry and treat us instead as one element in their PR plan. I'm afraid this is only going to get worse.

Anyway, I only saw two films this week that featured mainstream stars. One was the gritty thriller Shot Caller, in which Game of Thrones' Nicolaj Coster-Waldau plays a banker sent to prison, where he becomes a criminal with the help of gang member Jon Bernthal (above). The other was the comedy Crash Pad with Domhnall Gleeson, Thomas Haden Church and Christina Applegate, corny but enjoyably silly.

From Australia, Teenage Kicks is a dark coming-of-age drama with very realistic characters. The offbeat British drama Palace of Fun is an intriguing story of obsession. From Congo, Felicite is a gorgeously made odyssey about a fiercely strong woman. Belgian ensemble romance Even Lovers Get the Blues features a cast of good-looking 30-somethings wrestling with issues of sex and love. And the web series I'm Fine follows a group of cliched but likeable gay men in West Hollywood. Then there was a festival that held its opening night... 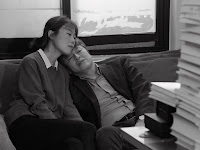 The Day After
dir Hong Sangsoo; with Kwan Haehyo, Kim Minhee 17/Kor ***.
With a blackly comical tone, Korean filmmaker Hong Sangsoo tells a witty tale of relational chaos centring around a man caught between the three women in his life. With its improvised dialog and extended takes shot in striking monochrome, this is a loose, entertaining film that continually surprises the audience with its tricky pacing and an elliptical style of storytelling that makes it feel like we've been here before. And the characters are hilariously messy.