Critical Week: It's a battlefield 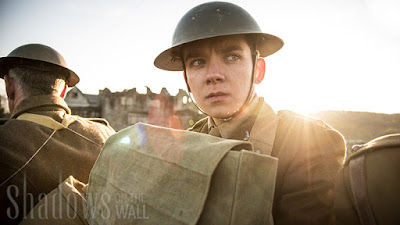 Normal press screenings are slowly returning to London, although there are still a lot of awards-season screenings going on for Oscar and Bafta voters to catch up on things. The Bafta nominees came out this week, led by The Shape of Water, and nominated films are beginning to flood the cinemas.

But I'd seen all of those ages ago! So this week, I caught up with Journey's End, a slow-burning WWI drama with Asa Butterfield, Sam Claflin and Paul Bettany. It's moody and intense, and carries a very strong kick. The late Martin Landau gives his last screen performance in Abe & Phil's Last Poker Game, a warm drama costarring Paul Sorvino about two retirees in a rest home trying to have a bit of an adventure.

The micro-budget British drama In Another Life is a fascinating story told through the eyes of a Syrian refugee trying to get from France to England. It's strikingly well shot, and the story is compelling. And there were also two documentaries: The Ice King is the amazing story of British figure skating legend John Curry, a tortured genius whose life is revealed through lots of lost footage. And there was also this one...

Eric Clapton: Life in 12 Bars
dir Lili Fini Zanuck; with Eric Clapton, BB King 17/UK ***
Low-key and a little dry, this documentary is an intriguing portrait of a guitar nerd who became a rock hero. Fans will love it, certainly not minding its long and meandering structure. Filmmaker Lili Fini Zanuck traces Clapton's life from his childhood in Surrey (including the shock of learning that his sister was actually his mother) to art college and London's 1960s underground blues scene, his key influences (BB King, Muddy Waters, Bismillah Khan) and work with the Yardbirds, Bluesbreakers and Cream. It also traces the impact of friendships with Jimi Hendrix and George Harrison, his years battling with addiction and his inability to remain faithful in a relationship. This is assembled from existing footage and interviews, with terrific home movies and performances segments. But the narrative is fractured, dropping key revelations in later on and getting rather distracted by some events while skipping over others. Thankfully it comes back together in a powerful final chapter as Clapton finally seems to have his life in control. Through all of this, his musical genius is indisputable, and that's enough to keep us watching.

This coming week I'll be seeing Aardman Animation's Early Man, the British drama Finding Your Feet, the British horror Ghost Stories and the doc The Cinema Travellers, among other things no doubt. I also have a lot of work still to do as chair of the London Critics' Circle Film Awards, which take place on 28th January.
Posted by Rich Cline at 15:20