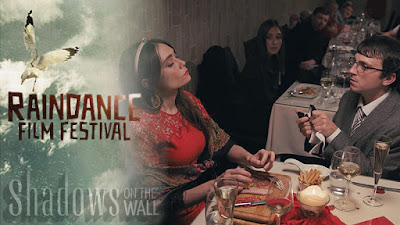 The Raindance Film Festival arrives each autumn with the promise of a banquet of films that are far more truly independent that anything on the Sundance programme. The hitch is that Raindance always arrives just as press screenings kick off for the London Film Festival, a far bigger and more important event for journalists. Many decide to skip Raindance completely, but I've always tried to at least get a flavour of the festival. And this year I did better than usual.

Features: I have caught 10 features this year, which isn't bad even though it's only a tiny slice of the broad and deep programme. Actually, my favourite of these was one I saw in Venice in 2017, Sara Forestier's amazing drama M. The others were a range of intriguing, offbeat, sometimes wildly ambitious films that are packed with surprising moments. British comedy Love Possibly (above) is a witty improv-style mock-doc poking fun at romantic comedies. American indie Dizzy Pursuit is a clever one-room comedy hilariously lampooning how hard it is to make an indie comedy. And Redcon-1 is a messy, big-scale British zombie action thriller.

Docs: Raindance specialises in offbeat documentaries (doesn't every film festival these days?), so I caught a range of them. George Michael: Freedom is the director's cut of the deeply insightful biographical doc the iconic singer-songwriter himself completed the week before he died. Ruminations is a lovely look into the lives of the famed Cockettes performance art troupe, through the eyes of colourful original member Rumi Missabu. And there are brief reviews of two more Raindance docs below.

Shorts: I managed to see nine short films playing at Raindance this year. These ranged widely in quality, from the painfully obvious to the darkly insightful. None of them was a knock-out, but the best of the bunch: The Rabbi, a refreshingly complex drama from Israel that never mentions its central provocative theme out loud; 3 Siblings, a short doc about the intriguing connection between very distinct siblings (one is trans, one is gay, one is a football player) in a Sao Paulo favela; and Sunken Plum, a bold Chinese short exploring deep-seated bigotry as well as a defiant subculture. Reviews of all nine are HERE.

If the Dancer Dances

dir Maia Wechsler
with Stephen Petronio, Meg Harper, Andrea Weber, Rashaun Mitchell, Gino Grenek, Dava Fearon
18/US ***.
Brisk and bright, this dance-studio doc goes behind the scenes of an unusual production that changes the dynamic of an established company. Beautifully shot in a rehearsal space with full-length corner windows on Manhattan, the film looks terrific. And filmmaker Maia Wechsler keeps the pace snappy, capturing the personalities along with extraordinary physicalities. Up to now, Stephen Petronio's dance company has only ever performed his work. But in an effort to preserve a classic production, he decides to restage iconic choreographer Merce Cunningham's Rainforest with the help of three dancers (Mitchell, Weber and veteran performer Harper) from Cunningham's company. Stephen's dancers are surprised by this change of tack, including a new way of rehearsing without music. The film is an intriguing exploration of how dancers use muscle memory, as the original Rainforest performers discuss the singular nature of Cunningham's style, the way he stripped away obvious narrative to tell a story physically. Archive clips are superb, interviews are full of insight. And it's fascinating to watch these dancers challenge themselves to achieve something so unfamiliar, while Petronio watches bemused from the sidelines. As Cunningham said, "If the dancer dances, everything is there."
Dykes, Camera Action!

dir Caroline Berler
with Desiree Akhavan, Rose Troche, Cheryl Dunye, B Ruby Rich
18/US ***.
Fast-paced, expertly edited and informative, this documentary traces how lesbians have been portrayed in cinema over the decades, as well as the rise of gay female filmmakers who put their own ideas and stories onto the big screen. It's an intriguing angle on movie history, as the majority of films are made by and centre on straight men and the way they see women. So this angle is important, tracing the journey from negative portrayals in the 60s (The Children's Hour, The Killing of Sister George) through experimental movies of the 70s into more mainstream hits like Personal Best (1982) and The Hunger (1983). And from here, lesbian filmmakers found their voices in films like Go Fish (1994), Rose Troche's deliberately cheerful Aids-era comedy, and Lisa Cholodenko's High Art (1998), a great film by any standard. And Jamie Babbit's classic comedy But I'm a Cheerleader (1999) was hugely influential in crushing stereotypes. And then there's The Hours (2002), which was both mainstream and queer at the same time. This doc may only be an hour long, but it includes a superb range of clips and interviews with people who know what they're talking about.
Reviews of the Raindance films I've seen are online, linked through my RAINDANCE page, and I'll continue adding review links there as I see more of the movies.

Aw, this was a very nice post. In idea I want to put in writing like this moreover – taking time and precise effort to make a very good article… but what can I say… I procrastinate alot and under no circumstances appear to get one thing done. online casino bonus