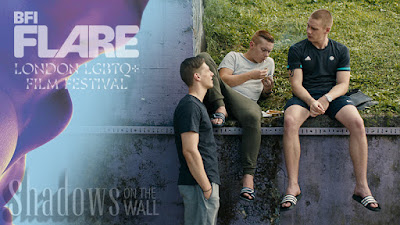 The 33rd BFI Flare is still running on BFI Southbank, and I'm still watching too many movies, chatting with filmmakers and attending parties - this is a great festival on all of these levels. That said, I took Thursday off from Flare, just to have a break (and to recover from a particularly epic party the night before), then it was back into screenings on Friday, with a delegate reception in the evening. Yes, it'll be fairly busy over the weekend, and I can sleep next week! Here are some more highlights...

Consequences [Posledice]
dir-scr Darko Stante; with Matej Zemljic, Timon Sturbej 18/Svn ****
Diving straight into thug culture, this Slovenian drama is abrasive and often tough to watch as it depicts unapologetically brutal teens who have no respect for anything or anyone. But filmmaker Darko Stante also locates the central character's humanity beneath his anti-social persona. And the way the film takes on some darker, more fundamental elements of society is downright chilling.

Splinters
dir-scr Thom Fitzgerald; with Sofia Banzhaf, Shelley Thompson 18/Can ***.
Warm and sensitive, this drama by Canadian arthouse filmmaker Thom Fitzgerald is based on a stage play, with complex characters and a relatively simple plot. The film is augmented with flickers of memory, revealing internal thoughts and feelings. The pacing is a little slow and circuitous, and the moods are muddy and sometimes undefined, but the central ideas about legacy and acceptance are powerfully resonant.

Giant Little Ones
dir-scr Keith Behrman; with Josh Wiggins, Darren Mann 18/Can ***
There are some strikingly powerful elements to this Canadian teen drama, which explores youthful sexuality in a complex, thoughtful way, boosted by solid acting across the board. In the film's middle section, writer-director Keith Behrman dips into some trite melodrama and cheesy plotting that threatens to derail the entire story. Thankfully, he puts it back on track for a series of genuinely powerful moments in the final act.

We the Animals
dir Jeremiah Zagar; with Raul Castillo, Sheila Vand 18/US *****
Sensual and evocative, this coming-of-age drama uses colours and textures to bring its characters to vivid life. The narrative is loose, almost dreamy, as filmmaker Jeremiah Zagar captures the thoughts, feelings, hopes and anxieties of these people. It's a beautiful film, full of both giddy happiness, deeply felt emotion and that sense that, through a child's eyes, adults are a mystery... FULL REVIEW >

Opening with statistics about the exponential growth in homophobic hate crime in the UK over the past few years, this brisk, engaging documentary proceeds to explore a subculture in which LGBTQ people can find support and freely express themselves artistically. British vogue balls are patterned after the iconic 1980s New York scene, with various houses competing against each other in the ballroom. The doc traces the movement's history back nearly a century, as queer people have sought ways to live their most fabulous selves, crushing barriers of race and sexuality to celebrate creativity and expression, borrowing from various musical traditions and a wide range of occupations. The lively, brightly engaging men and women interviewed here can be rather smug about how inventive and wild they are, and they speak as if they've already learned everything ("Flawlessness is so boring!"), but they also make important points about inclusion and community. The house mothers, designers, performers, judges and deejays all have stories about being outcasts in search of a place to fit in, and this scene supplies that. After the film's informational introduction, it moves from house to house, showing rehearsals and revealing camaraderie before hitting the floor for some epic posing, mainly in Manchester. This is where the doc comes to life, as these performances express the ideas and emotions much better than words. The costumes and movements are simply jaw-dropping, and the events are emceed with wit and energy by the iconic Rikki Beadle-Blair. In the end, the film becomes important as it profiles people who have found a place where they are accepted and loved, and where can truly shine. As one performer says, "Shout loud enough to let people know they're not alone."