The UK's top film critics held their annual awards ceremony on Sunday night at The May Fair Hotel in London, with a superb lineup of red carpet guests. I happen to be the chair of the 36th London Critics' Circle Film Awards, which we started organising back in June, so it was great to see the evening unfold in such a joyous, celebratory way. The most memorable moment (pictured above) was when Kate Winslet led the audience into a spontaneous standing ovation for beloved actor-filmmaker Alan Rickman, who died on Thursday. 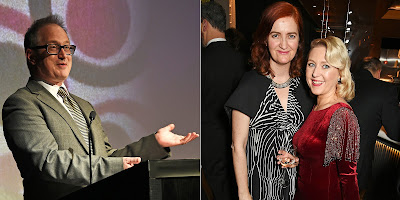 The ceremony was hosted by comic Robin Ince (left), who stepped in at the last minute due to the sudden illness of one of our planned host. He balanced the mood perfectly, with a witty look at movies that included a number of hilarious Brian Blessed anecdotes. On the right are nominated writer Emma Donoghue (Room) and the Critics' Circle Film Section Chair Anna Smith. 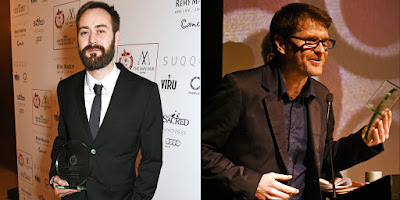 We had a new award this year. First, we handed out our inaugural prize for British/Irish Short Film of the Year, which went to Ben Cleary (left) and his lovely, and now Oscar-nominated, short Stutterer. And we rebranded our British/Irish Breakthrough Filmmaker prize as The Philip French Award, in honour of our esteemed colleague who passed away this year. It went to John Maclean (right) for Slow West. 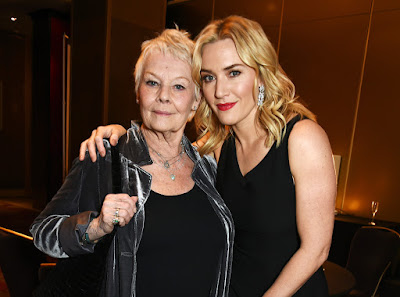 Of course, Kate Winslet was one of the brightest stars on our red carpet, and she also took home the award for Supporting Actress of the Year for Steve Jobs. She also had a mini reunion with Judi Dench - they both played Iris Murdoch in Iris. 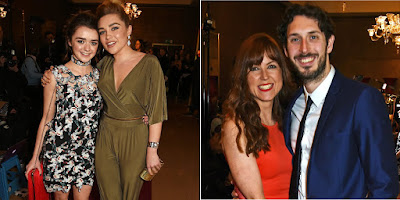 Maisie Williams won the Young British/Irish Performer of the Year award, and livened up the red carpet in her Mexican-wrestler themed dress, accompanied by fellow nominee Florence Pugh (left), her costar in The Falling. Along for the party were actor Blake Harrison and his fiancee Kerry (right). 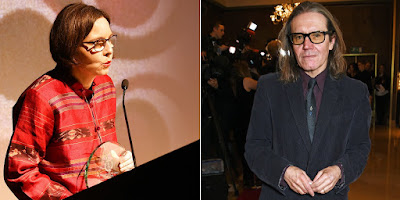 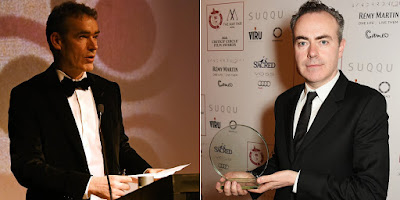 Two directors accepted awards on behalf of their actors. Rufus Norris (left) read a thank you message from Tom Hardy, who was named British/Irish Actor of the Year for his body of work in 2015, including Norris' London Road, The Revenant, Mad Max: Fury Road and Legend. And Brooklyn director John Crowley (right) relayed a hilarious thank you from Saoirse Ronan as British/Irish Actress of the Year. 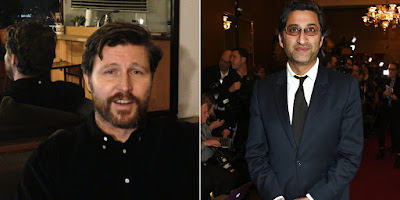 Andrew Haigh (left) sent a video thank you for British/Irish Film of the Year for 45 Years. Producer Tristan Goligher took to the stage to grab the trophy. Meanwhile, Asif Kapadia (right) was on hand to collect the Documentary of the Year award for Amy. 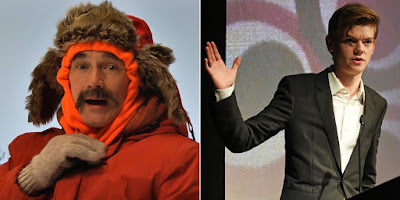 Mark Rylance sent a surreal video to accept Supporting Actor of the Year, performed in character (left) from the set of the play he's doing in Boston. His Wolf Hall costar Thomas Brodie-Sangster (right) accepted the award for him. 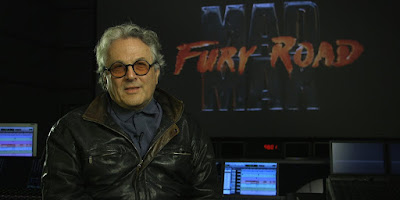 And then there was George Miller, who sent two witty videos to gratefully accept the top awards for Director of the Year and Film of the Year for Mad Max: Fury Road. 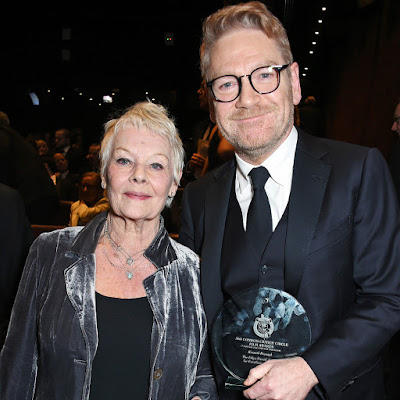 And the ceremony wrapped up with the main event of the night, as Judi Dench took to the stage to present the Dilys Powell Award for Excellence in Film to Kenneth Branagh. Both gave smart, gracious speeches that had the audience laughing and sighing.

Of course, I also have to shamelessly include two collages of photos that I appear in. As chair, one of my many jobs is to welcome all of our guests at the top of the red carpet, so I had a chance to talk with each of them before the event started. Below is a rather ridiculous photobombing session with Dame Judi and Sir Ken.

And I also feel I should share this series of photographs taken while I was chatting to Kate Winslet about the last time I saw her (when she was about to pop with her third child) and her next movie, Triple 9 - I saw it last week but she hasn't seen it yet. Of course she's awesome in it. 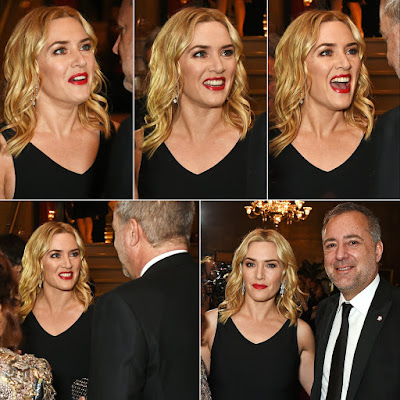 And to drop one more name, as I made my way home following the after-party, I received a lovely email from Tom Hardy, who was deeply apologetic that he had been unable to turn up to accept his award and join the party. He's shooting a film in London at the moment, and production ran over. Hopefully he'll make it next year.
Posted by Rich Cline at 15:21