London-based critics caught up with Michael Bay's Benghazi thriller 13 Hours this week. It's skilfully assembled with a strong cast, but bombastic and frustratingly simplistic. There was also a very late press screening for The 5th Wave, the latest teen-dystopia thriller. Starring Chloe Grace Moretz, it's a lot better than anyone expected. And then there was Ride Along 2, a lazy sequel reuniting Ice Cube and Kevin Hart for a new buddy-cop action-comedy in Miami.

Charlize Theron and Tye Sheridan are terrific in the creepy thriller Dark Places, which loses its way in melodramatic excess. Jeremy Saulnier's Green Room is one of the sharpest, most original horror thrillers in recent memory, propelling the audience into an unnervingly realistic nightmare. British filmmaker Stephen Fingleton is getting awards for his debut post-apocalyptic drama The Survivalist, a strikingly well-acted, inventive film that kind of gets stuck in its own rut. The Spanish animated moon-race adventure Capture the Flag makes up for its low-tech imagery with a quick-paced story and witty characters. And the understated Brazilian drama Aya Arcos makes up for its super-low budget with realistic, involving characters. I also caught up with a movie that doesn't seem to have a UK release planned at all... 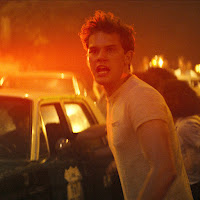 Stonewall
dir Roland Emmerich; with Jeremy Irvine, Jonathan Rhys-Meyers 15/US *.
Director Emmerich really needs to stick to those big, tongue-in-cheek action movies he's so famous for (like Independence Day, The Day After Tomorrow or my personal guilty pleasure 2012). His last foray into "serious" filmmaking was the appalling revisionist Shakespeare bio Anonymous (2011), and now he has made this even more insulting drama about the roots of the gay pride movement. The film was criticised for not telling the whole story, but that's not the worst thing about it. The problem is that the movie is an endless stream of misguided cliches and trite moralising. There isn't a single scene that rings true, and it's not the fault of the actors (they're actually rather good, including Irvine in the focal role). Not only does Emmerich flatten each dramatic moment with awkwardly pushy direction, but Jon Robin Baitz's script rings false, trivialising what should be some darkly personal events and leaving real-life people lurking pointlessly around the edges of a narrative that tries to be the story of Everyman (or more accurately, every young white man). Please stick to blowing up the White House, Roland.

Coming up next week: Julianne Moore and Ellen Page in Freeheld, Adrien Brody in Backtrack, Blythe Danner in I'll See You in My Dreams, the animated romp Oddball and the Penguins, the cycling doc Battle Mountain, and the Israeli horror movie JeruZalem.
Posted by Rich Cline at 12:42