In the New Year so far, there have been no actual press screenings, so my movies have been on the small screen. This includes a couple that were made for TV. Benedict Cumberbatch was back for Sherlock: The Six Thatchers, an enjoyable mystery that continued this sporadic series' drift into insufferably smug tricksiness. This includes Sherlock's obsession with Twitter, swiftly abandoned when the plot needs to move. Let's hope upcoming episodes are more focussed on solid storytelling and character development. I also finally caught up with the pilot for The Get Down, directed by Baz Luhrmann. It's a hugely engaging movie set amid the burgeoning rap scene in 1977 New York. There's plenty of whizzy style, as expected, but also a clever depth of character that developed nicely through the following five episodes. I also caught the financial thriller The Crash, which has a starry ensemble cast good enough to make the film watchable despite a startlingly dull script. 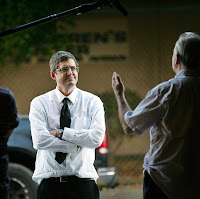 My Scientology Movie
dir John Dower; with Louis Theroux, Marty Rathbun, Marc Headley, Andrew Perez, Rob Alter 16/UK ***.
British journalist Louis Theroux seems to fall into the Twilight Zone as he tries to make a balanced and open-minded, sympathetic documentary about Scientology. Despite never setting out to be combative, he keeps running into bizarre roadblocks, inexplicable reactions and aggressive resistance. Even the ex-members he talks to seem to be less than forthcoming. Some elements of this film don't work very well (such as all of the repetitive driving around or hiring actors to play prominent church members like Tom Cruise), but the film paints an intriguing portrait of an organisation that doesn't want any scrutiny at all - friendly or otherwise. And while Theroux goes out of his way to find the positive aspects of their beliefs and practices, Scientology's rather comically intimidating, incessant meddling ultimately makes it impossible for the audience to remain objective. Which of course ends up being the point. 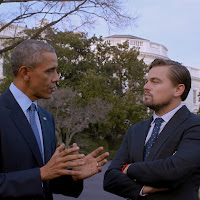 Before the Flood
dir Fisher Stevens; scr Mark Monroe; with Leonardo DiCaprio, Barack Obama, Ban Ki-Moon, Pope Francis, Elon Musk, Alejandro Inarritu 16/US ****
This documentary may be rather pushy, but then it's about what should be the most important issue facing humanity at the moment: climate change. The film follows DiCaprio as he travels around the world for two years as a United Nations messenger of peace, asking questions, talking with leaders and experts, exploring the situation from devastated boreal forests to melting ice caps to burnt-out jungles to the flooded streets of Miami. Scientists have almost never so wholeheartedly agreed on any issue, including what needs to be done to slow the changes and avert catastrophe. And yet idiots (most of whom are paid off by oil company lobbyists) continue to deny that this is taking place, unforgivably jeopardising future generations. This isn't about ignorance, it's about evil. And there's plenty we can do if we can muster up the will. This clear-eyed, beautifully assembled documentary is a bit gimmicky, but it carefully highlights the issue for anyone who wants to know the truth.

Screenings start up again on Monday, and I have the James McAvoy thriller Split in the diary. There's also Ben Affleck's mobster drama Live by Night, the 60s-style thriller The Love Witch and a German drama called Jonathan.