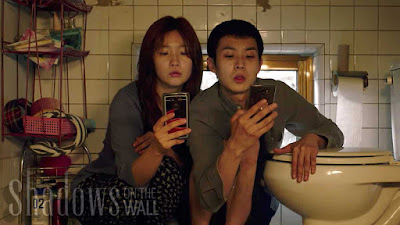 These are busy days in the screening rooms, with festival films as well as the usual forthcoming releases. And the awards season has also begun to rear its head with for-your-consideration screenings. It'll be like this for the rest of the year! This week I caught up with the Cannes-winning Parasite by Bong Joon-ho, a staggering drama about a family of con-artists that continually twists and turns to keep the audience gasping. There was the second Shaun the Sheep Movie, Farmageddon, which is just as sweet and hilarious, if a bit more madcap, than the first. Melissa McCarthy, Tiffany Haddish and Elisabeth Moss all go against type in the thriller The Kitchen, which struggles to find its tone. And Ready or Not is a horror comedy that's funny and very grisly, but not scary at all.

Awkwafina is terrific in a dramatic role in The Farewell, a charming and involving drama set in China. The gifted Jennifer Kent (The Babadook) is back with the important, unnerving and rather long dramatic thriller The Nightingale, set in 19th century Tasmania. Celine Sciamma (Girlhood) is back with the staggeringly good, utterly unmissable period romance Portrait of a Lady on Fire. Richard Kind gets a rare serious role in the gentle, uneven virtual reality drama Auggie. The inventive but messy black comedy Groupers takes on homophobia in ways that will make everyone feel uncomfortable. And this beautiful documentary opens this week...

Reflective and intimate, this understated documentary simply follows women who initially seem completely different but reveal layers of common ground between them. Filmmaker Kristof Bilsen cuts between Thailand and Switzerland, quietly observing mothers and children as they connect to each other in unexpected ways. This gives the film a gently involving narrative, allowing the audience to experience these situations and emotions in a vivid way.

Pomm is a care worker from an isolated Thai village. She only gets to see her children when she's on holiday, and feels guilty that she isn't there all the time. Her job is to work with the Western patients at Baan Kamlangchay, an Alzheimer's care centre in Chiang-Mai. One of these is Elizabeth, a smiley woman who occasionally wonders where she is. "You're on holiday in Thailand," Pomm cheerfully reminds her, calling her "granny". Pomm feels that her patients are family, and she uses emotions to communicate with them. Meanwhile in Switzerland, Maya has early onset Alzheimer's at 57, and is being readied by her family to travel to Chiang-Mai. Maya's husband and daughters are sensitive to criticism that they are sending her away, but from their perspective this is a sacrifice, giving up their time with her so she can have a better life and proper care. As Pomm is grieving Elizabeth's death, Maya moves in, and they begin a new relationship.

The film is beautifully shot without ever being pushy about themes, offering remarkable insight into a variety of issues, including a young woman who needs to work two jobs to support a family she rarely sees and also the importance of providing dignified care for Alzheimer's patients. It's fascinating to see how Pomm identifies with women who have lost their past lives. She longs to hug her mother, who takes care of her kids, but the culture forbids it, so she lavishes affection on her patients instead. She's also well aware that if she needed this kind of care, she could never afford it. Yes, this is the kind of doc that makes us think.

Much of my time at the moment is being taken up with festival screenings. The Raindance Film Festival is running right now (18-29 Sep), and press screenings have already begun for the London Film Festival (2-13 Oct). I'll of course have more updates on both of those! And there are also regular movies screening for the press these days, including Naomie Harris in Black and Blue, Juliette Binoche in Non-Fiction, Jamie Bell in Skin, Mathieu Amalric in Sink or Swim and the horror movie The Birdcatcher
Posted by Rich Cline at 15:41