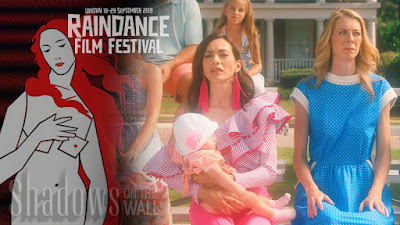 The 27th Raindance Film Festival is underway in London, with a wonderfully eclectic programme of independent films from all over the world. It's a lively, friendly event at which the filmmakers mix with audiences in a way that other film festivals never quite manage. Certainly the London Film Festival doesn't even attempt that - and for a journalist it's always a bad schedule clash as Raindance takes place during the advance press screening schedule for LFF, so days are very long! But as Raindance founder Elliot Grove says, "You can sleep when it's over." Here's a first batch of highlights including the opening film Krow's Transformation below, followed by my usual Critical Week, because those regular movie releases keep coming as well...

Greener Grass
dir-scr Jocelyn DeBoer, Dawn Luebbe; with Jocelyn DeBoer, Dawn Luebbe 19/US ****
With an exhilaratingly bonkers tone, this suburban satire uses surrealism to maximum effect, as if it's the lovechild of David Lynch and John Waters. Drenched in lurid pinks and blues, the film looks simply amazing, and actor-filmmakers Jocelyn DeBoer and Dawn Luebbe (above) pack every moment of the film with witty touches, astutely skewering a society that places value on surface over substance. Yet even as it's laugh-out-loud hilarious, there are strong emotions gurgling underneath.

World Beyond My Mind [Draussen in Meinem Kopf]
dir Eibe Maleen Krebs; with Samuel Koch, Nils Hohenhovel 18/Ger ***.
Dark and provocative, this intense German drama explores a complex friendship between two young men who begin to desperately need each other. It's jagged and often difficult to watch, simply because the material is so pointed. Filmmaker Eibe Maleen Krebs skilfully avoids claustrophobia even though the entire story takes place in one room, using the camera, lighting and a cast of vivid characters to challenge the audience's imagination in perhaps dangerous ways.

The Waiter
dir-scr Steve Krikris; with Aris Servetalis, Yannis Stankoglou 18/Gr ***
Greek filmmaker Steve Krikris brings plenty of moody visual style to this dark drama, so it holds the interest as it slowly creeps through a plot that swirls with suggestion. But as the film continues, it becomes increasingly clear that there's very little to it. Basically a character study, it's very nicely observed but too contrived and humourless to work on any more than a superficial level... FULL REVIEW >

Label Me
dir-scr Kai Kreuser; with Renato Schuch, Nikolaus Benda 19/Ger ****
Dark and thoughtful, this German drama is beautifully understated as it explores the complexities of identity for an immigrant who is afraid to let anyone see who he really is. Within a brief running time, writer-director Kai Kreuser maintains a tight focus on the shifting balance of power between two central characters, wasting no time on melodrama or the usual gyrations of plot structure... FULL REVIEW >

Imperial Blue
dir Dan Moss; with Nicolas Fagerberg, Esther Tebandeke 19/UK **
Traversing three continents, this British thriller is seriously ambitious, perhaps too much so for these inexperienced filmmakers. Director-cowriter Dan Moss is working with a great idea here, but the script perhaps wasn't quite ready to shoot, as it is riddled with gaps in logic. And the direction feels a little haphazard as well, with scenes that feel unplanned or incomplete. Still, the central story and fascinating locations do hold the attention.

This is a fairly straightforward narrative documentary covering three years in the journey of a young man's transition from female to male, including of course a major shift in his modelling career. It's beautifully shot and edited without any gimmicks, tracing Krow's journey with real intimacy as he, his friends and family let the cameras into their lives. The details the film includes are fascinating, openly discussing private aspects of a trans man's new life. Krow's trans musician friend Kas also speaks candidly to the cameras about his own journey, letting the crew document his wedding to Emily.

Filmmaker Gina Hole Lazarowich begins following Krow as a pre-transition 18-year-old in Vancouver, talking about how he felt growing up, realising that his gender was an issue. He first contemplated suicide at 11. His mother Lisa encouraged him to start modelling (as a girl) at age 13 in Japan, then he made a group of transgender and queer friends, including best pal Ashton. His mother wasn't so supporting of his transition, believing it was a fad and worrying about the permanence of this "life choice". But she also knew the importance of assuring Krow that she loved him no matter what. "It has nothing to do with me," she says. "It's about him and what he needs, not what he wants." There are also powerful discussions about loneliness, knowing that no one will ever understand this but recognising that some people will offer love and support.

Seeing both old and new clips is fascinating, as it highlights Krow's physical changes, most notably his deeper voice and masculine manner. And photographer Dexter talks about how interesting it has been to shoot photos of Krow before and after his transition. The best thing about this doc is the way Krow takes everything in its stride: his situation is normal for him, and shouldn't be seen as shocking. So while it's not easy, for example, to learn to give yourself testosterone injections every day, you'll get there. Each person who shares their experience in this film allows the audience into their thoughts and feelings, which makes the film remarkably emotional. And these powerful moments are dotted all the way through.

Aside from London Film Festival titles (more about those after the festival starts on 2nd October), I've also caught up this week with the terrific true story Skin, featuring a ripping performance from Jamie Bell as a violent racist. Naomie Harris is by far the best thing about the rather substandard cop thriller Black and Blue. Mathieu Amalric leads the enjoyable men's synchro swimming comedy-drama Sink or Swim (the same story was the British movie Swimming With Men last year). The British-Norwegian WWII thriller The Birdcatcher looks great but is too melodramatic to take seriously. The Bulgarian-Russian fable Aga is gorgeous both visually and thematically. And because there were no press screenings, I bought a ticket to see Rambo: Last Blood, which was far worse than it needed to be.

This coming week's press screenings will include Joaquin Phoenix in Joker, Adam Driver in The Report, Keira Knightley in Official Secrets, Will Smith in Gemini Man and the wartime allegory Werewolf. Can it really be October already?
Posted by Rich Cline at 09:31