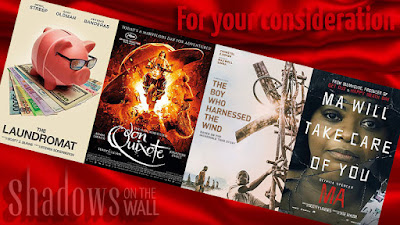 I've been catching up with movies released earlier in the year that are eligible in the upcoming awards season. Whether they're worthy of consideration is another thing...

Weaving together a series of true stories, this financial comedy-drama seeks to explore the secret life of money. It's ambitious, silly and deliberately absurd, narrated by two dandy lawyers (Banderas and Oldman) in Panama. But the script follows so many threads and delivers so much information that it never comes to meaningful life. The themes are vitally important, the film makes some very strong points, and the performances are excellent, but the wildly flailing barrage of detail is numbing.

After a personal tragedy, Ellen (Streep) begins looking into the fraudulent insurance company in Nevis that has shortchanged her. She discovers it's linked to a Panama law firm helping the world's wealthiest people hide their money in shell companies. Their globe-spanning clients include murderous drug kingpins, an African billionaire (Anozie) who knows he can buy anything, and a British businessman (Schoenaerts) who arrogantly challenges his contact (Chao) in China. And the story is about to break, implicating everyone from movie stars to governments.

The film is essentially about the astonishingly thin line between illegal tax evasion and legal tax avoidance. But it's very difficult to care, or even to pay attention, amid endless conversations about finance, insurance, lawsuits, and so on, especially when the tone is so glib. The cast tries to spice things up with personality, screenwriter Burns keeps the words sparky, and director Soderbergh keeps things visually whizzy. But it still feels dull and unfocussed. There's too much effort to create witty cause-and-effect metaphors and colourful explanations, when a coherent, involving central story would have done this much more efficiently.


The Man Who Killed Don Quixote

dir Terry Gilliam
with Adam Driver, Jonathan Pryce 18/Sp ***.
Terry Gilliam spent more than 25 years working on this project (a previous attempt to film it was documented in Lost in La Mancha), and getting the film released wasn't easy either. The plot is wacky and meandering, but Gilliam infuses it with a gleefully freewheeling tone, taking flights of fancy at every turn. So even if its defiantly original style can be challenging, it's both raucous good fun and sharply pointed... FULL REVIEW >


The Boy Who Harnessed the Wind

For his writing-directing debut, Chiwetel Ejiofor ambitiously takes on a true story from rural Malawi. Beautifully shot in the actual locations, the narrative unfolds in a relatively straightforward way, which doesn't allow for a lot of subtext. But it's a thoroughly involving tale, populated by lively characters. And it's also seriously inspirational as it follows a young teen whose curiosity changed his world.

In a small farming village plagued by cycles of drought and flooding, it's getting more and more difficult to manage the grain harvest. Farming a small plot of land, Trywell (Ejiofor) finds his crops either over-soaked or parched. His wife Agnes (Maiga) is an educated woman who wants the best for their teen children Annie (Banda) and William (Simba). Annie hopes to go to university and is secretly seeing a schoolteacher (Tsipa), while William is a voracious student worried because his parents can no longer afford his school fees. So keeping access to the school library becomes a problem as he begins to figure out a way to solve their irrigation problems using wind-power.

The dramatic conflicts in this story feel a little contrived, as they pit the observant, inventive William against his pointlessly stubborn father. Surely Trywell would understand by now that his son might have ideas beyond his age. But he digs his feet in, flails against nature and prays for rain, while ignoring the solution right in front of him. On the other hand, this provides some meaty conversations, and terrific scenes between Ejiofor, Simba and Maiga, who flesh out their characters beautifully. So in the end, it's a skilful retelling of an important story, and aspects of the film are impressive, such as how Ejiofor learned the local language. It also looks gorgeous, and its emotional kick is very strong, as is the way it encourages us to seek outside-the-box solutions to things like political corruption and natural disasters.

Starting as a rather typical slickly made smalltown comedy-drama, director Tate Taylor begins from the start to undermine the usual forced Hollywood-style levity with elements from horror movies. But while Octavia Spencer keeps it watchable, the script and production are far too smoothed out to actually generate any suspense, including the way the screenplay uses important topics to offer simple explanations for the nastiness that erupts later on.

Erica (Lewis) and her teen daughter Maggie (Silvers) are settling into life in a new town. Trying to fit in at high school, Maggie hangs out with a group of cool kids including popular girl Haley (Miller), nice guy Andy (Fogelmanis) and jocks Chaz and Darrell (Brown and Waivers). After friendly Sue Ann (Spencer) buys booze for them, she stalks them online and befriends them ("Call me Ma!"), turning her basement into party central. But is she only pretending to be a cool adult?

There are interesting layers to the story, such as Ma's insecurities, which date back to her school days, when her classmates included Maggie, Andy's dad Ben (Evans) and his mean-girl girlfriend Mercedes (Pyle). Taylor overstates these themes loudly, making each wrinkle in the story so painfully obvious that the actual surprises seem anticlimactic. And many sequences feel badly compromised (surely Ma did something else to Ben in the first draft, and her own teen humiliation is botched in a pitch-black gloom). Thankfully, Spencer is skilled at believably navigating Ma's whiplash tonal changes from sweet to party girl to psychopath. But even she can't sell the hyper-grisly climax.