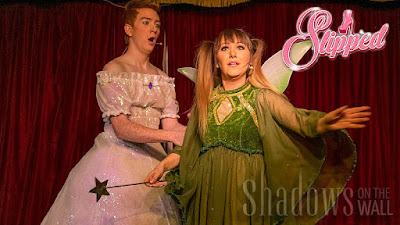 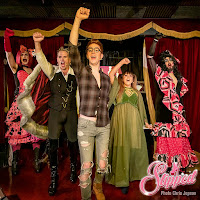 This was my first panto at Royal Vauxhall Tavern, and I knew it would be a twist on the formula. Indeed, it's a riotously rude, gender-bending romp featuring the usual tropes, including how it's chirpily addressed to an audience of "boys and girls" while everything is very adult indeed. With a terrific script and nimble direction, plus an engagingly up-for-it cast of cross-dressers, this is a fabulous blast of holiday spirit.

The fairy tale is well and truly fractured. Cinderella (Cartwright) is off to the ball thanks to help from his Fairy Godmother (Reeves), who has some anger issues. But his wicked stepmother Lady Garden (McNeilly) and evil stepsister Pleasure (Lavender) are also in attendance, hoping to catch the eye of the eligible Prince Charming (Watkins). The problem is that the prince ha s a shoe fetish, so he's more interested in that exquisite glass slipper than whoever was wearing it.

Where this goes is flat-out ridiculous, encompassing a series of amusing musical numbers. Classics like Tomorrow and Especially for You (or rather, Shoe) mingle with more recent hits like Juice, Señorita and You Need to Calm Down. Plus a seriously unforgettable rendition of Shallow. The script is littered with pop culture references as well as nods to news headlines that feel so up-to-the-moment that the show will be shifting along with the UK's election campaign. It will definitely be worth revisiting.

And the performers are relentless scene-stealers, trying to win the audience over with individual call-and-response catch-phrases while directly appealing for sympathy at every turn. Each has great stage presence, mercilessly lampooning themselves. Watkins' smirking Prince is sometimes unnervingly slimy, while Reeves and Lavender have a suitably appalling chemistry as the conniving, hairy-dopey baddies. As the heroine, Cartwright is appropriately bland but blossoms as things go on. And the show is well and truly stolen by Reeves, who skilfully channels Megan Mullally on speed as the Fairy Godmother, nailing the show's best gags. She also pops up in various witty side roles, and gets a chance to torment the audience directly (glitter alert!).

Director Tim McArthur takes a freewheeling approach that knowingly riffs on amateurish townhall-style productions. But these are talented professionals who never miss a beat, improvising jokes along with the script's funniest gags while trying to crack each other up. It's charming, hilarious and very rude. There are perhaps too many poo jokes (if that's possible), and the whole thing seems to be reluctant to come to an end. So it leaves us in just the right kind of Christmas mood.