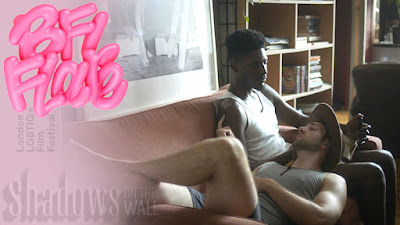 The 34th edition of the British Film Institute's Flare: London LGBTIQ+ Film Festival was supposed to kick off last Wednesday (the photo above is from the opening film Cicada), but of course it was cancelled, like everything else at the moment. I've covered this festival for 22 years, and it's my favourite - not just for the terrific mix of movies but also because it's one of the best chances all year to hang out with filmmakers and encourage new voices. The BFI is hosting a virtual festival over the next week, a selection of the films on its BFIPlayer, including live filmmaker Q&As. It won't be the same, but it's something!

I will cover as much as I can remotely from isolation at home, including the now-iconic annual collection Five Films for Freedom. To get started, here are some films that have been seen already in London - either at London Film Festival last October or on general release in the UK. Most are already streaming somewhere...

There's a lovely mix of personal emotion and societal outrage in this sensitive Georgian coming-of-age drama. Swedish writer-director Levan Akin keeps the camera close to the protagonist, seeing events tightly through his eyes as the world comes into brighter focus for him. What it says about empty, fearful machismo is very harsh, and this is also an engaging celebration of artistic freedom. And a bold statement of support for Georgia's LGBTQ community... FULL REVIEW >

There's a bold, bracingly fresh idea at the centre of this film, and actor-filmmaker Xavier Dolan spends much of the running time avoiding it, just as his characters do. The film is sharply written to catch the rhythms of 30-somethings still working out where to go with their lives. And the central story of two lifelong friends has a strong kick, even if it comes a bit late... FULL REVIEW >

A fascinating exploration of the notorious 1996 drama Showgirls, this documentary asks whether it's a masterpiece or a turkey. Or maybe it's both at the same time. Certainly, Paul Verhoeven's film has become a cult classic in the two decades since it was declared the worst film of the year (it swept the Razzies). With comments by journalists, academics and commentators, plus archival interviews with the actors and filmmakers, this is a deep dive into why such an obviously trashy movie has had such an indelible impact... FULL REVIEW >

At age 69, Pedro Almodovar delivers on of his most intimate, powerfully inventive films, a striking rumination on the nature of artistic creation in the story of a filmmaker looking back on his life and work, neither of which are quite finished yet. The movie is of course visually sumptuous, but there's also a confident maturity in the storytelling that makes several moments drop-dead gorgeous. It's, quite simply, a stunner... FULL REVIEW >

Like a blast of fresh air, this raucous teen comedy approaches high school from an unapologetically female perspective. The film doesn't merely flip the gender, it inventively finds a new path through the usual tropes to create fantastically vivid and complex characters while indulging in the kind of silly outrageousness that has always been reserved for boys. It deserves to be a massive hit... FULL REVIEW >