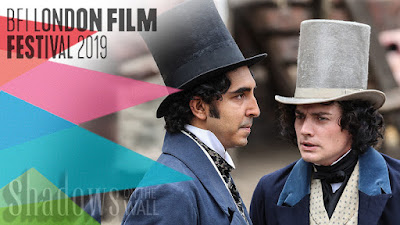 The 63rd London Film Festival kicked off on Wednesday with a gala premiere for Armando Iannucci's take on Dickens with The Personal History of David Copperfield. This is the kind of festival where you know there are parties, but you're not invited to any. And I'm not the kind of person who chases invitations. So there are stars around the festival, but they rarely cross paths with either press or audience members. That said, Iannucci did come in person to chat to the press after the screening on Wednesday morning, so that makes a start! And I do have appointments to interview various actors and filmmakers over the next 10 days. The trick is finding time to write and sleep in between watching movies. It's Day 1 and I'm already exhausted. Here are some highlights...

The Personal History of David Copperfield
dir Armando Iannucci; with Dev Patel, Tilda Swinton 19/UK ***.
After taking on Russian history with The Death of Stalin, Armando Iannucci turns to Charles Dickens with this elaborately funny and relatively faithful adaptation. Of course, the film is laced with the filmmaker's usual quick-fire wit and engagingly ridiculous characters, but it also maintains an undercurrent of deep sadness in its timely tale of income inequality and social injustice. With a mostly happy ending, naturally.

dir-scr Chinonye Chukwu; with Alfre Woodard, Richard Schiff 19/US ***
A somewhat overwrought sensibility kind of undermines this hushed, intense death row drama. Where it needs to be coolly aloof, the film indulges in gyrating emotional fireworks. This give the actors plenty of scenery to chomp on, but it waters down the power of the writer-director Chinonye Chukwu's story. Still, the film makes important comments about the issue of capital punishment, without ever preaching... FULL REVIEW >

dir-scr Tyler Nilson, Mike Schwartz; with Shia LaBeouf, Dakota Johnson 19/US ***.
A warmly offbeat road movie, this drama takes a fable-like approach that becomes increasingly engaging as the story progresses. It's beautifully shot in American coastal wetlands, with an evocative song score and superbly unfussy performances from the cast. First-time feature filmmakers Tyler Nilson and Mike Schwartz refreshingly ground everything in a matter-of-fact tone that draws out the themes without ever pushing them... FULL REVIEW >

dir Alejandro Landes; with Julianne Nicholson, Moises Arias 19/Col ****
Dramatically filmed in an epic landscape with a Lord of the Flies sensibility, this wildly inventive Colombian thriller has an earthy, honest tone and a plot that's unpredictable and often unnerving. With its almost allegorical style, the film is a bracing depiction of both animalistic humanity and lost youth, echoing war-zones around the world. This adds a proper kick of both intrigue and resonance... FULL REVIEW >

A fascinating exploration of the notorious 1996 drama Showgirls, this documentary asks whether it's a masterpiece or a turkey. Or maybe it's both at the same time. Certainly, Paul Verhoeven's film has become a cult classic in the two decades since it was declared the worst film of the year (it swept the Razzies). With comments by journalists, academics and commentators, plus archival interviews with the actors and filmmakers, this is a deep dive into why such an obviously trashy movie has had such an indelible impact. It gets a little sidelined into the film's cultural impact (which is rather dubious), but it's all great fun.

Showgirls was dismissed on its release, this doc suggests, because Verhoeven was far too comfortable with using nudity and sexuality at the centre of a Hollywood movie, especially one with strong female leads. In Europe this isn't such a problem, and director McHale includes extensive clips from Verhoeven's Dutch films before and after his American sojourn (there are also plenty of scenes from RoboCop, Total Recall and Basic Instinct). It's fascinating to hear experts talk about the over-the-top acting, Eszterhas' blatantly in-your-face script and Verhoeven's trashy eye. On the other hand, the film also contains serious themes that echo elements of society most viewers (and pretentious critics) don't want to face.

In other words, it's not a fluke that Showgirls has become a beloved classic. And that's not just because it's so bad it's good. It's actually a technically adept film with astute directorial touches everywhere. So there's more to the story. And in exploring the shattered career of the film's star Berkeley, this doc begins to touch on a much bigger topic about the underlying sexism of both Hollywood and all of America.

Of course, I also had to watch a few non-festival films this past week, including Joaquin Phoenix storming the cinema in Joker, Will Smith doubled in the rather standard action movie Gemini Man, Eddie Murphy's terrific turn in the groovy Dolemite Is My Name, Chris Morris' gut punch of a political comedy satire The Day Shall Come and the haunting Polish post-war thriller Werewolf.