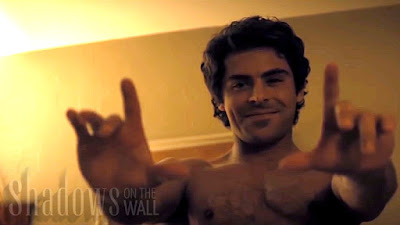 It's been another week with a random collection of London press screenings. Thankfully, the winter weather has suddenly turned summery, just in time for the four-day Easter weekend. The biggest movie for me this week was the Sundance hit Extremely Wicked, Shockingly Evil and Vile, in which Zac Efron delivers an unusually layered performance as notorious killer Ted Bundy. Thankfully the film isn't chronicling his murders or the police investigation; instead it's a clever take from a more easily identifiable perspective. Claire Denis' foray into science-fiction High Life stars Robert Pattinson and Juliette Binoche as crew members on a deep space mission. It's of course beautiful, evocative and rather challenging. And Julianne Moore plays an opera singer in the offbeat Bel Canto, based on a true story about a hostage situation in South America. It's a mix of drama and thriller, impeccably played by the cast. But it's an odd concoction.

Further afield, we had Sergei Loznitsa's pitch-black political comedy Donbass, about the Russian occupation of eastern Ukraine. It's brilliantly shot and edited, and the doc-style acting makes it both funny and harrowing. The Skin of the Teeth is a quirky drama set in New York that explores identity through a very unusual drug trip. Set in rural Argentina, the strikingly well made and darkly involving Marilyn is about a young man harshly harassed for questioning the idea of masculinity. Hagazussa is a freak-out horror from Germany, full of 15th century superstitious nastiness. And Doozy is a part-animated experimental documentary about comic icon Paul Lynde, a little too arty to offer much in the way of information, but still fascinating. And then there was this music-based movie, dropped online last weekend...

This short feature is set out as a mythological story of love and war, set around an island called Guava at the centre of the world. The opening, beautifully animated in the style of a children's book with intricate colours and textures, recounts how the Red family seized control of the silkworms, industrialising production and destroying paradise. Generations later in a poverty-stricken suburb, Kofi (Rihanna) grows up hearing this story, dreaming about a life far away. Her childhood boyfriend is musician Deni (Glover), who dreams of writing a song that will unite the island's people and remind them of what this place could be. From here the film shifts into beautifully shot live-action, with Rihanna and Glover in the roles. They bristle with wit and personality in the vibrant, sundrenched-island setting (it was filmed in Havana). While Kofi works in a garment factory with her friend Yara (Wright), Deni is planning a secret concert to feature his new songs, which have begun being played on local radio. Deni sings about how Guava is essentially America, since the only way to get rich is to make someone else richer. As a result, he's grabbed by officials and taken to the boss Red Cargo (Anozie). "How do you know what's best for everyone?" Deni asks him, as he declares the concert cancelled. As the story continues, there's a terrific mixture of music and song, including variations on Childish Gambino hits This Is America and Summertime Magic. And the drama shifts seamlessly from personal and warm to edgy and intense. The story takes several turns, sometimes a bit obvious (Kofi has just found out that she's pregnant) and sometimes darkly surprising (Red Cargo's reaction is vicious when Deni defiantly decides to go on with his performance). Where the story goes is sobering and sometimes shocking. What it says about human resilience in the face of oppression is powerful, while the pulsing fusion of music and culture adds a visceral kick. So while it feels a bit slight, it's a badly needed cry of hope in an unjust world.

After Easter weekend, we have screenings of the year's biggest blockbuster Avengers: Endgame, Lin Shaye in Room for Rent, the Scottish indie drama Beats, the Dutch drama Just Friends, and a collection of short films screening at the forthcoming Tribeca Film Festival.
Posted by Rich Cline at 21:55