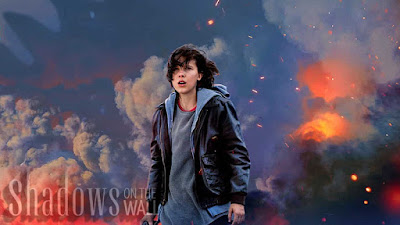 I've hit the cinemas in California this week trying to catch up on press screenings I missed while away from London. Godzilla: King of the Monsters is a deeply unsatisfying follow-up to Gareth Edwards' 2014 reboot. Millie Bobby Brown (above) is terrific in the best role, but the script is choppy and simplistic. The effects are also rather murky, as they are in Dark Phoenix, the fourth in the X-Men First Class cycle. It feels oddly melodramatic, with a superb cast that livens up a dull script that never quite connects the dots. By contrast, Brightburn is another superhero genre twist from James Gunn (see also The Specials and Super). It's a rare horror movie that's scary and involving, because it takes time to build the characters and situations. And these two documentaries are released this week...

After taking office in 1954, President Eisenhower ordered the firing of all homosexuals working for the government. The worry was that they could be seduced by Russian spies, even though there wasn't a single documented case of this happening. FBI agents aggressively uprooted every aspect of a suspected gay employee's life in invasive investigations, often on the basis of one informant. The accused had no recourse: they were threatened and then fired as "undesirable" by the tens of thousands, their careers ended, often driven to suicide. All of this came as a shock, as society before this had been much more open and accepting. The film carefully traces how this came about, a perfect storm combining McCarthy's communist witchhunt and a fear of homosexuality sparked by Kinsey's report. Director Howard uses a snappy combination of expert interviews, firsthand accounts and archival material. This includes a number of strikingly involving personal stories, including Frank Kameny, the first person who didn't go quietly after he was fired. He formed an activist society in the early 1960s, which led to a series of protests against discrimination and abuse, including the Stonewall riots at the end of the decade. This continued into the 1990s, when Kameny finally saw President Clinton overturn Eisenhower's law. This is a remarkably important documentary, covering an angle of the civil rights movement that is rarely explored with such honesty. The intimate approach, accompanied by a terrific range of archival material, makes it deeply involving and often powerfully moving. It almost ends on a note of triumph, as if all of the nastiness is in the past, which already feels eerily optimistic and perhaps a bit naive in the face of renewed bigotry and persecution around the world. But this also reminds us that there will always be people willing to stand up for what's right.

There's an intriguing depth to this documentary, which tackles some big issues using firsthand commentary rather than research or expert opinions. The topic is the urban struggle, encompassing racial injustice and poverty, and the filmmakers simply observe people who speak about an unexpected way they've found to escape the cycle of criminality. The setting is Newark, where beefy black men (and one muscled woman) strip down to a, well, single sock for lively audiences. Filmmaker Graham interviews several members of the New Jersey Nasty Boyz, as well as their loyal fans and family members. They speak a lot about their shared childhoods in the projects and their respect for the community, which is expressed through charity work and fundraising shows. They avoided a life of crime by staying in education and relying on their faith and close relationships, tapping into their African tribal roots as they do erotic dance. The film takes a simple, unfussy approach, letting the sassy attitudes emerge in both captured conversations and sweaty, lusty dance routines. "It's not about sex," says Momma Joe, whose sons Raw Dog and Tygar perform as a double act. "It's the illusion of having sex!" When the filmmakers are focussing on the dancers and their work, the energy is riveting. So the film kind of drags when it drifts gently into the larger themes. But the stories these people tell are powerful, as is the insight they can offer into a society that never gave them a chance due to inadequate schools and below-poverty wages. No wonder it's so difficult to avoid crime. And no wonder stripping offers both the dancers and the audience members an escape, a chance to control their fates. "It's therapy," one guy says. "It's our way out."

I'm heading back to London this weekend, so will be in catch-up mode on films opening over the next few weeks. I have Julianne Moore's Gloria Bell to watch on the plane. And back in London, my diary over the next week includes Danny Boyle's musical Yesterday, the reboot Men In Black International, the indie British drama Bait, and the documentary Marianne and Leonard: Words of Love...
Posted by Rich Cline at 16:04