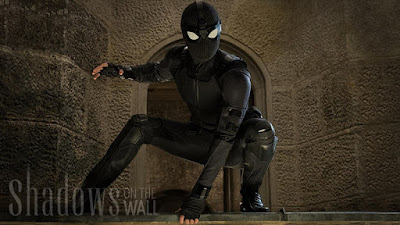 This week's blockbuster press screening was for Spider-Man: Far From Home, a refreshingly enjoyable blockbuster starring the hugely engaging Tom Holland. It continually undermines the usual overserious nonsense of superhero movies, and is relentlessly good fun. Benedict Cumberbatch, Michael Shannon and Nicholas Hoult star in the stylish historical drama The Current War, as Edison, Westinghouse and Tesla, respectively. It's a riveting story, nicely told. Alicia Vikander and Eva Green play sisters in Euphoria, a drama about mortality that's beautifully shot and acted, but eerily elusive. And nearly 25 years after Braveheart, Angus Madfadyen returns to the role of Robert the Bruce, a solidly produced film from a choppy script. And Peter Strickland's In Fabric is an enjoyably bonkers stylised horror movie about a murderous dress.

From abroad, we had The Shiny Shrimps, a French comedy drama based on the true story of a gay water polo team. It's funny and involving, but ultimately uneven. Also from France, Amin is an edgy immigration drama that's very sharply observed. From Mexico, Fireflies also centres on immigrants, this time an Iranian in Veracruz, and his story is strongly moving. From India, Photograph is a beautifully involving love story with some unexpected touches. From Canada, the provocative, engaging Roobha centres on an offbeat relationship between a middle-aged married man and a young trans woman. And there were two from Bangladesh: Saturday Afternoon is a tense and sharply pointed one-take thriller set during a terrorist standoff, while Sincerely Yours, Dhaka is a collection of seven superbly well-made shorts exploring pungent issues that resonate strongly.

I also caught a few documentaries. Memory is especially gripping for film fans, as it traces the origins of Alien, which was released 40 years ago. Marianne & Leonard: Words of Love is a fascinating bio-doc about Leonard Cohen centring on his relationship with his muse Marianne Ihlen, with filmmaker Nick Broomfield adding himself into the story as usual. Political activists, not devil-worshippers, are the focus of Hail Satan, a witty doc about how the Satanic Temple exists mainly to provoke and challenge pompous injustice. And the warm, personal Southern Pride follows two bar owners in Mississippi as they try to celebrate LGBTQ culture.

Coming up over the next week, we have Florence Pugh in the horror thriller Midsommar, Colin Firth in Kursk: The Last Mission, Sylvester Stallone back for Escape Plan: The Extractors, the Sundance-winning comedy Brittany Runs a Marathon, the French coming-of-age drama Love Blooms, and the doc Varda by Agnes.
Posted by Rich Cline at 22:37