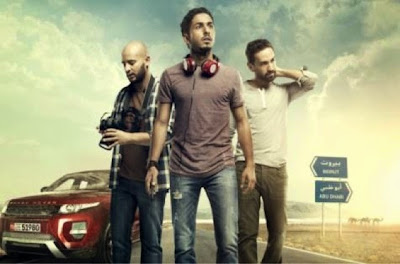 This is the 8th Abu Dhabi Film Festival, and my first visit to this part of the world. I'm here on the Fipresci jury, which is tasked with giving prizes to two Arab films: narrative and documentary features.

Last night the festival kicked off with a lavish opening night event, complete with an epic red carpet, ceremony honouring producer Edward Pressman and filmmaker Rachid Bouchareb, and then the opening film From A to B, the first film from the Emirates to open the festival. It's a lively road movie with an unusually sharp script that combines character-based humour, introspective drama and a sharp sense of the political scene as three 25-year-olds drive from Abu Dhabi to Beirut, recreating a trip they were supposed to take five years earlier.

This is a wonderfully involving story, with solid performances from the likeable, camera-friendly cast. The three central characters are very clever - all lifelong expats (from Syria, Egypt and Saudi Arabia) who met at an American school in Abu Dhabi), each with his own personal issues and a distinct sense of humour. After last night's world premiere it should play well at other festivals, and also with at rouse crowds who have probably never seen a film from this part of the world that's so packed with sparky humour.

CRITICAL WEEK: Life goes on
Yes, during all the festival chaos, I still have to keep writing my usual reviews and reports on what's happening in cinemas. All of this is on the website. Non-festival films seen this week include Horns, Say When (aka Laggies), November Man, The Necessary Death of Charlie Countryman, Extraterrestrial and Stations of the Cross.
Posted by Rich Cline at 06:58

Email ThisBlogThis!Share to TwitterShare to FacebookShare to Pinterest
Labels: Abu Dhabi film festival, Adff, Ali mostafa, from a to b