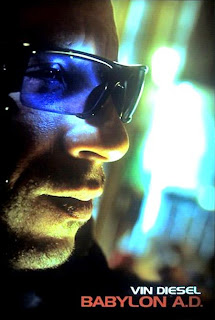 Honestly, you know when Vin Diesel's name is above the title of a dystopian action movie that you're not in for something subtle or thought-provoking. Indeed, Babylon A.D. plays out like a blunt, dumbed-down version of Children of Men. The film wasn't screened at all for American critics, and there were only a couple of press screenings in the UK. Director Mathieu Kassovitz says the film is bad because the studio interferred with production and then re-edited his work. Honestly.

Other films this week were the Noel Coward adaptation Easy Virtue, with some superb performances (Kristin Scott Thomas, Colin Firth) and also some pretty-but-empty acting (Jessica Biel, Ben Barnes). It's entertaining, but also a bit annoying. Which is how I felt about Live!, a slightly stale black satire of reality TV starring Eva Mendes as a ruthless network exec. The Warriors is a meaty historical epic from China with a trio of heavy hitters (Jet Li, Andy Lau, Takeshi Kaneshiro) as 19th century military leaders who take a blood oath that's strained to the breaking point. And finally, Eden Lake is a genuinely scary thriller with unnerving subtext, as a couple (Kelly Reilly and fast-rising star Michael Fassbender) is terrorised by a gang of disaffected teens.

For this coming week, I have the stoner comedy Pineapple Express, the Ewan McGregor-Michelle Williams thriller Incendiary, the past its sell-by date spoof Disaster Movie, Canadian-Indian romantic drama Partition, Wong Kar-wai's redux of his 1994 Ashes of Time, the Korean horror A Bloody Aria, and a bunch of crime movies: Al Pacino in 88 Minutes, the 3D kidnapping thriller Scar, the Cannes-winning Gomorrah from Italy, Outlanders from the UK and Jar City from Iceland.

Yes, it's a busy week, and it also includes the RocknRolla press conference, the launch event for the forthcoming Raindance Film Festival and the launch of the British Film Institute's 75th anniversary festivities. I'm tired just thinking about it.
Posted by Rich Cline at 10:32 No comments: 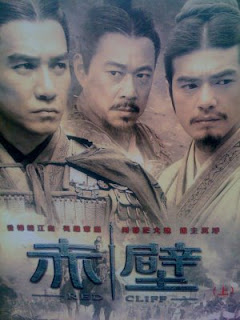 Howdy from Beijing, where I'm working a non-film freelance job for two weeks. As I've been out and about around the city, I've kept an eye out for two movie-related things: cinemas and bootleg dvds. But I haven't seen any sign of either. Apparently cinemas here are pretty low profile, hidden in the bowels of shopping malls. And bootleg dvds have been swept out of sight by officials cleaning up the city for Olympic tourists. I have seen two film posters - one for Hancock (which opened here in June) and the one pictured here - John Woo's forthcoming historical Chinese action movie Red Cliff (which opened here last month).

Anyway, I'll be back in London over the weekend and back in movie mode. Looking back at my last week before I came here, I had three very big movies - and all of them disappointed me in some way. The Mummy: Tomb of the Dragon Emperor got the earlier film's B-movie tone all wrong, going for mega-budget archaeological thrills in the same summer that Indiana Jones returned. Star Wars: The Clone Wars boasted seriously impressive animation, and some terrific action sequences, but barely enough plot to sustain a 20-minute TV episode. And Guy Ritchie's Rock N Rolla is a roaringly entertaining London crime drama with a superior cast, but it doesn't really add anything new to the genre that Ritchie himself kickstarted with Lock, Stock and Two Smoking Barrels. By far the best film of the week was Walter Salles' small, sensitive innercity drama Linha de Passe.

Next week I already have a few screenings lined up, and have no idea what to expect from them. Babylon AD looks like pretty mindless action fun. Easy Virtue has a terrific cast and a script based on a Noel Coward play. Live! is an overdue mocumentary about reality television. Gardens in Autumn is a French comedy by a Georgian filmmaker. And The Warlords is a Chinese action epic with Jet Li, Andy Lau and Takeshi Kaneshiro. Looks fantastic, but I really want to see Red Cliff...
Posted by Rich Cline at 06:44 No comments:

Critical Week: Not another comedy!

This past week will go down as the most mixed of the year for me, filmwise. I saw two of the best movies I've seen all year, but the duds nearly drowned them out. The main problem was star-led comedies, all of which had the stale stench of vanity project about them. Here's the hall of shame, in the order I saw them: Mike Myers' The Love Guru mined a bottomless pit of bottom jokes; Adam Sandler's You Don't Mess With the Zohan missed the central joke of his premise; Emma Roberts' Wild Child actually managed to wring a few decent laughs out of a seriously tired premise; Will Ferrell's Step Brothers was a one-gag movie stretched beyond the breaking point; Ben Stiller's Tropic Thunder was far too much of a clever thing; and Simon Pegg's How to Lose Friends & Alienate People couldn't decide if it was goofy slapstick or a silly rom-com (and should have been neither).

Much better were the arthouse offerings: Steve McQueen's astonishing Hunger is one of the most original films of the year, with a killer kick of emotion to go with its provocative central theme; Ari Folman's Waltz With Bashir is a remarkably inventive animated documentary that emotionally probes the whole idea of war; Mark Herman's The Boy in the Striped Pyjamas cleverly looks at Nazi inhumanity from a naive 8-year-old's point of view; and the outrageous Sarah Silverman's Jesus Is Magic shows no fear as it tackles one taboo after another, proving how conditioned our moralistic responses actually are.

Anyway, this coming week is my last full week of movies before I head to Beijing to work at the Olympics for a fortnight. And these are the films that are sending me off: Liv Tyler's horror thriller The Strangers, Brendan Fraser back for third helpings in The Mummy: Tomb of the Dragon Emperor, Star Wars goes animated in The Clone Wars, Guy Ritchie returns to London crimeland with RocknRolla, and Walter Salles returns to Brazil in Linha de Passe. I'll let you know the verdict next week.
Posted by Rich Cline at 23:07 No comments: