I've caught up with a few films while I've been out here in Los Angeles, in between binging on food at Thanksgiving time with the family. The best so far is Pixar's Coco, another triumph in both animation and storytelling. It's a riveting adventure with properly pungent emotional undertones and a fantastic sense of Latino culture.

And the other two this week were good as well. Based on the bestselling novel, Wonder is a beautifully made film that grapples with how it feels to be an outsider - a must see for school kids and everyone else too. It features a terrific cast of kids, including Jacob Tremblay and Noah Jupe. And Greta Gerwig's Lady Bird is one of the most honest coming-of-age movies in recent memory, a messy, lively, funny, wrenching tale of a teen (the superb Saoirse Ronan) flexing her wings for the first time. Particularly strong support from Laurie Metcalf.

I'm heading back to London this week, so am not sure what films are in store. Am hoping to catch an early screening of Paul Thomas Anderson's Phantom Thread, as well as James Franco's The Disaster Artist and the holiday horror Better Watch Out.
Posted by Rich Cline at 22:04 No comments:

Critical Week: Another day of sun

I'm in Los Angeles this week visiting my parents for Thanksgiving and enjoying the warm late-November sunshine. There were no movies on the flight's entertainment system that even remotely tempted me, so I just watched TV comedies and documentaries.

I've caught up with one film in the cinema - because I missed the press screening in London. Justice League is the latest DC movie, and it has a refreshing comic book tone that some of the more recent films have lacked. It also centres on characters rather than moody violent spectacle, although there is still too much of that. But at least the actors had more to work with this time, and it bodes well for already in-the-works movies to come. I also watched an awards screener (more of these to come)... 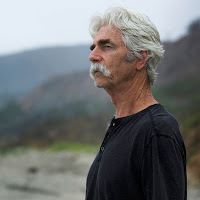 The Hero
dir Brett Haley; with Sam Elliott, Laura Prepon 17/US ***
This gently loping drama never says anything terribly original, but it gives Sam Elliott a terrific role as an ageing actor facing up to both his life and his mortality. It's written and directed in a relaxed style that never challenges the audience, other than the usual cringe at an unlikely romance. But it's nicely shot, beautifully acted, the themes are never overstated, and it ends on a warmly ambiguous note.

There are a few films I'm hoping to catch in cinemas and at screenings over the next week while I'm here, including Wonder, Coco, The Disaster Artist and Lady Bird. But we'll see if I can tear myself away from the sunshine...
Posted by Rich Cline at 22:59 No comments:

It was a disparate collection of movies this past week. The most obviously prestigious one was Darkest Hour, which chronicles the first month of Winston Churchill's first term as UK prime minister. It's a lavishly made film, anchored by a bullish performance from Gary Oldman. At the other end of the spectrum, Daddy's Home Two reunites Mark Wahlberg and Will Ferrell (plus Mel Gibson and John Lithgow as their dads) for a holiday comedy that's amusing without doing anything very new. More ambitious, The Dinner features strong performances from Richard Gere, Steve Coogan, Laura Linney and Rebecca Hall, although the film might be too tricky for its own good.

There were also three more true stories. Josh Brolin and Miles Teller lead the firefighting drama Only the Brave, which gets a little too caught up in its heroic machismo. Colin Firth stars in the sailing adventure The Mercy, a riveting tale with an enigmatic core. And The Man With the Iron Heart is a great story of the Nazi resistance, thrown out of balance with its duelling plot-strands starring Jason Clarke, Rosamund Pike, Jack O' Connell and Jack Reynor.

I'm travelling over the next week or so, and not sure what I'll be able to catch up with along the way. Targeted films include Justice League, Wonder, Thank You for Your Service, The Disaster Artist and The Current War. I'll be posting comments whenever I can...
Posted by Rich Cline at 13:11 No comments:

Critical Week: You better not pout

It seems rather early, but the holidays kicked off this week with the first festive movie, A Bad Moms Christmas, a sequel to last year's sweetly gross-out comedy with added grandmothers. More of the same, it's kind of the definition of mindless entertainment. There was also a press screening for Paddington 2, which might actually be better than the wonderful original film. It's a pure delight, a great story with superb characters and a range of silly, surreal and razor-sharp comedy.

And I can't remember the last time I was invited to attend a premiere, but tonight I was at the Royal Albert Hall for the world premiere of Kenneth Branagh's remake of the Agatha Christie classic Murder on the Orient Express. It's a big, classy whodunit with a nice mix of comedy and emotion stirred in to add weight to the characters. The entire cast was at the premiere, including Branagh, Judi Dench, Johnny Depp, Michelle Pfeiffer, Penelope Cruz, Daisy Ridley, Olivia Colman, Josh Gad, Willem Dafoe and Derek Jacobi.

There was also a spin on the zombie genre with the raucous office block black comedy Mayhem, as well as the remarkably straight-faced B-movie style bigfoot thriller Sightings. Plus two foreign films: the involving, mesmerising thriller Thelma from Norway and the movingly personal drama Santa and Andres from Cuba. And two docs: 78/52 gets into lots of enjoyable detail about how Hitchcock created that iconic shower scene, while The Freedom to Marry explores the activists at the centre of the Supreme Court's decision on marriage equality.

This coming week we have screenings of Josh Brolin in Only the Brave, Colin Firth in The Mercy, Richard Gere in The Dinner, Jon Bernthal in Sweet Virginia, Lee Pace in Revolt and Virginia Madsen in Better Watch Out.
Posted by Rich Cline at 22:44 No comments: