Critics caught up with Stephen Daldry's Slumdog Millionaire-style adventure Trash this week. It's a lively romp about three teens who make a surprise discovery while scavenging in the Rio dump. It's entertaining even if it feels badly contrived. The Wedding Ringer is a unexpectedly hilarious comedy starring Josh Gad as a groom-to-be who hires fast-talking Kevin Hart to be his best man. Thankfully it has a sharp sense of character and some very funny writing.

Gregg Araki's White Bird in a Blizzard feels oddly tame compared to the filmmaker's previous work, but it has a dark edge to it that holds the interest, even if the teen-girl set up (Shailene Woodley coming of age as her mother Eva Green goes missing) feels a bit overcooked. But it has a terrific sting in the tail. We'll Never Have Paris is an awkward rom-com starring Simon Helberg as an annoying guy trying to win his girlfriend (Melanie Lynskey) back after he botches the proposal. But he's so unlikeable that he clearly doesn't deserve her. And Hinterland is a microbudget British drama about two old friends (Lori Campbell and writer-director Harry Macqueen) who run off to Cornwall for two days to re-bond. Or something. It's so vague that it's hard to tell, but it looks great.

This coming week we have the much-delayed Jupiter Ascending (screening to press only a day before it opens), the Oscar-nominated The Tale of the Princess Kaguya, Bernard Rose's The Devil's Violinist, the blackly comical horror Suburban Gothic, the real-life horror The Town That Dreaded Sundown, the topical teen romance Boy Meets Girl and the acclaimed documentary The Overnighters.
Posted by Rich Cline at 19:38 No comments: 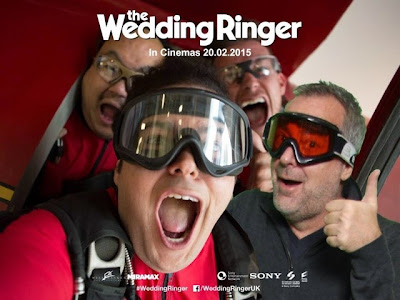 Critical Week: On the nose

In a relatively slow week for press screenings, the biggest film shown to the press was Mortdecai, a zany romp starring Johnny Depp, Gwyneth Paltrow, Ewan McGregor and Paul Bettany. Opinions are embargoed until Thursday (the movie opens on Friday). I also caught up with Michael Winterbottom's latest Italy-set film The Face of an Angel, a fictional exploration of the Meredith Kercher murder starring Daniel Bruhl, Kate Beckinsale and Cara Delevingne. It's an odd mix of moody drama, creepy mystery and dark emotions - interesting but not hugely satisfying.

Further off the beaten path, we had Alain Resnais' latest Alan Ayckbourn adaptation Life of Riley, a French-language Yorkshire-set comedy-drama shot on stage-like sets. All a bit mannered, but a fascinating exploration of barbed interaction. And there were two documentaries: Dior and I is an entertaining doc about Raf Simons' first show as Dior's creative director - both invoving and surprisingly moving because of the strong characters and powerful narrative. Maidan is rather more difficult, merely putting us right in the middle of the Ukrainian revolution in Kiev's central square - an outrageously sensual onslaught.

This coming week's films include a couple of movies I've been trying to catch up with for weeks: Stephen Daldry's Trash, Gregg Araki's White Bird in a Blizzard and Simon Helberg's We'll Never Have Paris. There's also Kevin Hart in The Wedding Ringer and the British indie Hinterland.
Posted by Rich Cline at 22:47 No comments:

My third year as chair of the London Critics' Circle Film Awards at times felt like it might do me in, but after all the work, the night was another triumphant celebration of the year in cinema. On Sunday 18th January we gathered at The May Fair Hotel for our annual ceremony and party, joined by a smattering of wonderful guests.

Our ceremony hosts this year were Alice Lowe and Steve Oram (below left), who won our Breakthrough Filmmaker award two years ago for their Sightseers screenplay. They set the tone for the ceremony perfectly: irreverent humour mixed with a love of cinema. After the clatter of the red carpet (above with Miranda Richardson and below right with me and Richard Linklater), the ceremony felt intimate and almost conspiratorial because it was so much fun. 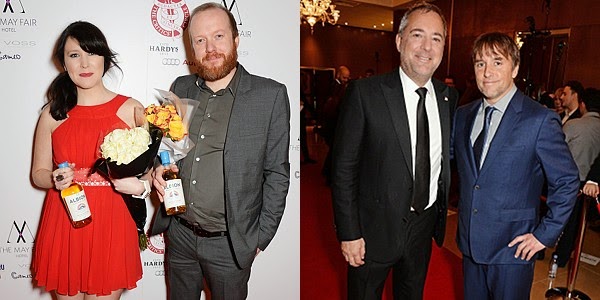 After a couple of introductions (from me and from our Film Section Chair Anna Smith), we were straight on to the awards themselves. Winners included Mica Levi (below left), who won the Technical Achievement Award for her score for Under the Skin, and Dirk Wilutzky and Mathilde Bonnefoy (below right), recently Oscar-nominated producers of the Documentary winner Citizenfour. 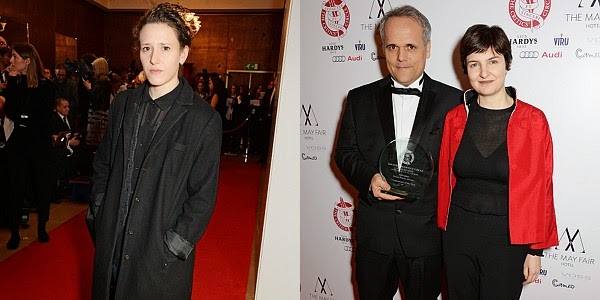 Three of our Young British Performer nominees were in the house, left to right: Corey McKinley ('71), Daniel Huttlestone (Into the Woods) and the winner Alex Lawther (The Imitation Game). 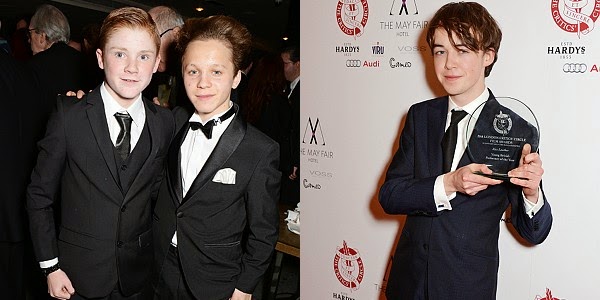 And we invited some potential future nominees along as well. Below left, that's Toby Sebastian (soon to be seen in Game of Thrones) and his sister Florence Pugh (star of Carol Morley's upcoming stunner The Falling). Below right are Ferdinand Kingsley (Dracula Untold) and Louise Brealey (Sherlock). 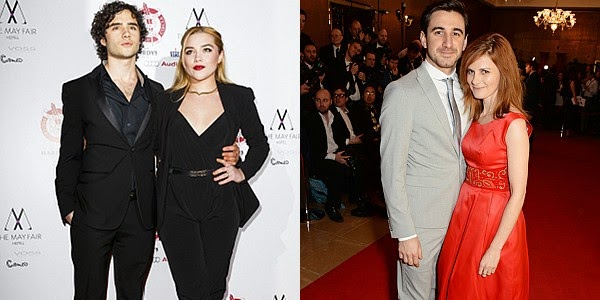 Quite a few British filmmakers were on hand, including Breakthrough Filmmaker nominees, left to right, Hossein Amini (The Two Faces of January), James Kent (Testament of Youth) and Jane Pollard and Iain Forsyth (20,000 Days on Earth), here flanking director Jonathan Glazer, whose film Under the Skin won the Attenborough Award for British Film of the Year. 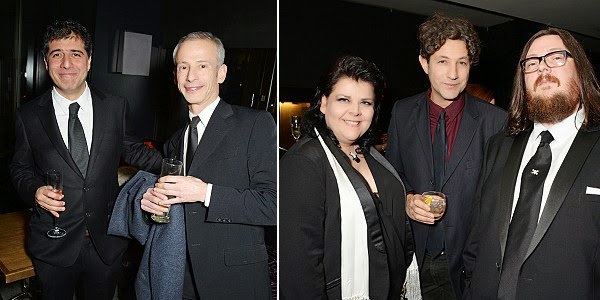 Breakthrough British Filmmaker was won by Yann Demange for '71 - he accepted his award by video (below right), as did Andrey Zvyagintsev (below left), whose Leviathan won Foreign-Language Film of the Year. 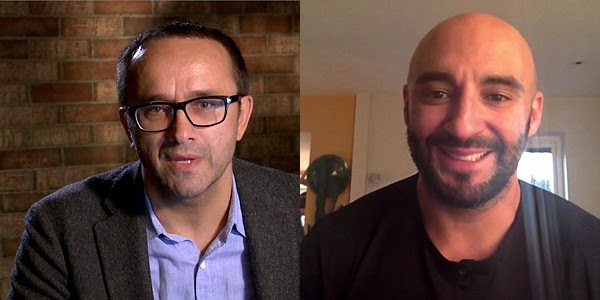 More video messages were sent by Michael Keaton (bringing down the house with a trouser-free acceptance of Actor of the Year for Birdman), Rosamund Pike (British Actress of the Year), Patricia Arquette (Supporting Actress for Boyhood) and Wes Anderson (Screenwriter for The Grand Budapest Hotel. Actress of the Year winner Julianne Moore (Still Alice) sent a generous written speech, while Supporting Actor winner JK Simmons (Whiplash) was conspicuously absent. 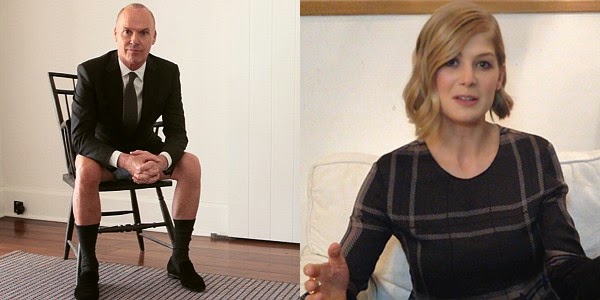 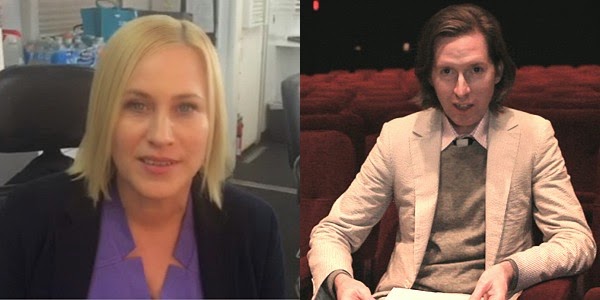 And Richard Linklater took to the stage twice for Boyhood, winning Director of the Year and Film of the Year (the award I presented). Finally, Stanley Tucci presented our biggest honour to the gorgeous Miranda Richardson - The Dilys Powell Award for Excellence in Film. Both gave speeches that combined sharp humour, warm friendship and a love of cinema. 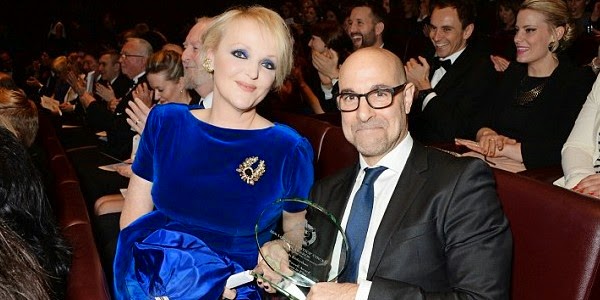 Finally, at the after-party I was snapped in perhaps my luvviest picture of all time - with Miranda and our British Actor of the Year winner Timothy Spall. Darlings! 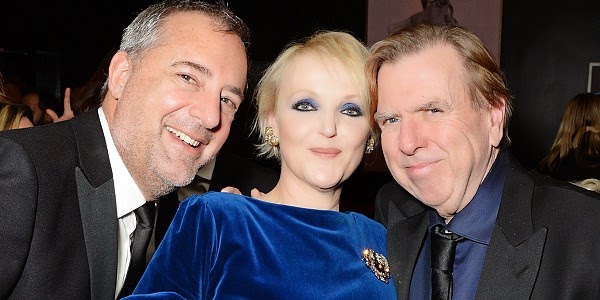 Easy: the press screening of this past week was Matthew Vaughn's Kingsman: The Secret Service, the Kick-Ass style James Bond spoof that's sure to have fans clamouring for more. It stars Colin Firth and rising-star Taron Egerton, plus the likes of Mark Strong, Michael Caine and Samuel L Jackson. The other high-profile screening this week was for Ex Machina, Alex Garland's debut as a director, a surprising artificial intelligence-themed sci-fi thriller starring Domhnall Gleeson, Alicia Vikander and the increasingly unmissable Oscar Isaac.

Also: The Turning is an anthology film from Australia, mercifully cut in half for its international release. It features engulfing, emotional stories starring the likes of Cate Blanchett, Hugo Weaving, Rose Byrne and Miranda Otto. Black November is a Nigerian drama re-edited for global release with new footage featuring stars including Mickey Rourke, Kim Basinger, Wyclef Jean and Akon. A great story, awkwardly told. It Follows is a freak-out horror movie that makes up for its essential simplicity with movie-style scares. And Snow in Paradise is yet another East End crime drama, tired but at least it takes an engagingly emotional approach.

This coming week we have Oscar nominations on Thursday and I am chairing the London Critics' Circle Awards on Sunday - always one of my busiest projects of the year as I put the event together and grapple with celebrities and their publicists. But Sunday night will be a lot of fun - look for the usual full report. As for screenings, there's Johnny Depp in Mortdecai, Daniel Bruhl in Michael Winterbottom's Face of an Angel, Stephen Daldry's Trash, Simon Helberg's We'll Never Have Paris, and the documentaries Dior and I, about the design house's new creative director, and Maidan, about the Ukrainian revolution.
Posted by Rich Cline at 11:59 No comments:

Critical Week: I didn't do it!

Press screenings are slowly starting up again after the holidays, and of the four films I watched in the past week, two featured innocent men on the wrong side of the law. Poker Night stars Beau Mirchoff (above) as a rookie detective whose life takes a horrific twist after he's inducted into the elite cops' secret game. An interesting idea, but the story struggles to hold water amid over-stylised filmmaking and scene-chomping performances. Even wobblier is Taken 3, Liam Neeson's latest work-out as an action star. Everyone on-screen is solid, but the Besson/Kamen script is ludicrous and Olivier Megaton's direction leaves the action scenes incoherent.

The other two films were much more challenging. Claude Lanzmann's Shoah (1985) is one of cinema's all-time masterpieces, and now he has turned an unused 1975 interview into a new doc The Last of the Unjust, highlighting a side of the Holocaust we've never seen. Low-key and straightforward, it's far too long and academic, but utterly essential. And then there's the Mexican multi-strand drama Four Moons, a sensitive, strikingly honest exploration of four stages of life for men grappling with their own gay identities. The filmmaking is a bit simplistic, but the acting and themes are powerfully involving.

Otherwise I took in some TV, binge-watching to catch up on the current seasons of Scandal (a pure guilty pleasure), Arrow (ridiculous but addictive), Agents of S.H.I.E.L.D. (corny but diverting) and The Walking Dead (starting to wear a bit thin). And then there's the Foo Fighter's doc series Sonic Highways, which inventively delves into the nature of music in society and how songs are written as Dave Grohl and crew travel around America recording songs in key cities. Fascinating, and surprisingly moving too. Plus of course the Christmas finale of Downton Abbey, which was a pure delight, for a change. For a film critic, television is like a great escape: I can actually watch something without working!

This coming week cranks up a bit more with screenings of Cate Blanchett's new film The Turning, Mickey Rourke and Kim Basinger in the delayed release of the Nigerian drama Black November, Stephen Daldry's Trash, Alex Garland's Ex Machina and the offbeat teen horror thriller It Follows.
Posted by Rich Cline at 23:50 No comments: