Meryl Streep surged to the top of the Oscar prediction charts the moment critics started seeing The Iron Lady. It's an oddly sympathetic biopic about the deeply unsympathetic Margaret Thatcher, and yet Streep manages to let us look into her soul. Remarkable. And there were other contenders screened to the British critics: Martin Scorsese's Hugo, a beautiful ode to early cinema wrapped in a youthful adventure, and Charlize Theron's brilliantly offbeat performance in Young Adult, which reunites Juno's writer and director.

We also saw the rather theatrical Margin Call, packed with terrific themes and performances; the odd mix of comedy and drama in The Big Year, combining the distinct styles of Jack Black, Steve Martin and Owen Wilson; an unsettling exploration of religious obsession in Camp Hell; Raul Ruiz's 4.5-hour epic exploration of 19th century identity in Mysteries of Lisbon; and the silly-cute gay Texan rom-com Longhorns.

I've also started receiving awards-consideration dvd screeners at home, almost daily, including most of the biggest films of the season. There haven't been any biggies yet that I haven't seen, but here's hoping...
Posted by Rich Cline at 22:58 No comments:

London critics were treated to a special preview of next spring's Aardman romp The Pirates! In an Adventure With Scientists! (or dumbed-down for American audiences as: The Pirates! Band of Misfits). Director Peter Lord walked us through the cast, a series of clips, one extended sequence from the film and two hysterical 3D trailers. He also brought along a range of puppets and sets from the film. Frankly, it looks wonderful. But we have to wait until March to see it. 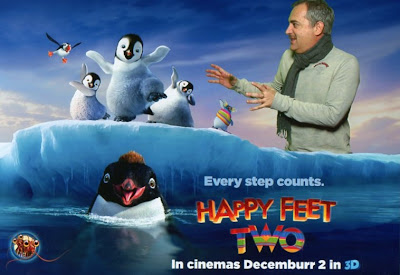 Trying to look villainous with my Movember tache ... but it looks like I want to give them a hug. And who wouldn't?
Posted by Rich Cline at 14:45 No comments:

Clint Eastwood's epic biopic J Edgar may already be out in America, but here in Britain there have been very few press screenings. It's a gorgeously made film with big performances from DiCaprio, Hammer and Watts spanning some 40 years in their characters' lives. But it also feels eerily cold and sad. Much more fun was the animated spin-off Puss in Boots, which playfully mashes up fairy tales, Zorro movies and Sergio Leone imagery. We also had the oddly overlooked drama Welcome to the Rileys, featuring solidly against-type performances from James Gandolfini, Melissa Leo and Kristen Stewart, as well as Sing Your Song, a slightly too-worthy doc primarily about Harry Belafonte's political activism.

Annoyingly, there is only one extremely small press screening today for Breaking Dawn Part 1, limited to newspaper critics. So I won't see the film until it opens on Friday. Sure, some movies are critic-proof, but this kind of media strategy can also backfire when the film's opening isn't covered properly in the press. Not to mention the affect this has on those of us who earn our living on this side of the film industry. UK distributors are also refusing to screen some other upcoming biggies, from Scorsese's Hugo to Spielberg's War Horse. If you're not in their favoured inner-circle, forget about it. Thankfully, other studios are more friendly, and this week we'll see the penguin sequel Happy Feet Two, Sam Worthington as the Man on a Ledge, Judi Dench and Maggie Smith in The Best Exotic Marigold Hotel, Glenn Close as Albert Nobbs, Colm Meaney's drama Parked and the doc An African Election.
Posted by Rich Cline at 09:07 No comments: 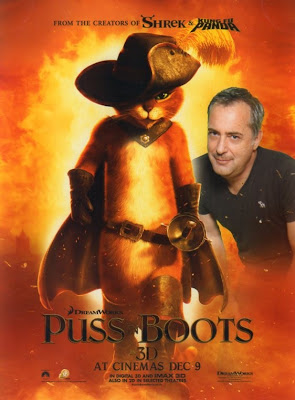 Critical Week: I want to be loved by you

The big screening for London critics this past week was the hotly anticipated My Week With Marilyn, which recounts the shooting of The Prince and the Showgirl, starring Marilyn Monroe (Michelle Williams) and Laurence Olivier (Kenneth Branagh). Terrific performances - and an amazing cast - make the film thoroughly enjoyable, even if it's never as magical we hope it will be. An equally stellar British cast provides the voices for this year's first holiday movie, Aardman's Arthur Christmas, a lively 3D romp that feels rather compromised to please American audiences. Meanwhile, Johnny Depp flies in the face of the establishment with the sunny comedy The Rum Diary, which plays the Hunter S Thompson cards a bit too forcefully but still keeps us smiling.

Less starry were the rather corny British ensemble comedy How to Stop Being a Loser and the almost pathologically charming (and chocolate-craving inducing) French rom-com Romantics Anonymous. And I thoroughly enjoyed revisiting three Francis Coppola classics: The Outsiders (1983), One From the Heart (1982) and especially The Conversation (1974) are bold, skilful films that no serious film fan should miss. And they're packed with early performances from actors who would go on to become huge stars. The Outsiders even has a cameo from a pre-teen Sofia Coppola!

Embargo news: the media has been bombarded with ads and interviews for the upcoming film Immortals. But even though they showed us the film a few weeks ago, the US distributor Relativity keeps extending the review embargo, which seems to hint that they don't have much faith in it. We are now not allowed to publish our comments until Thursday, the day before the worldwide release.

Critical Week: Give us a minute

This week's big, very late press screening was for the alternate-reality thriller In Time, in which Justin Timberlake and Amanda Seyfried are on the run from the Timekeepers (cops), the Minute Men (mobsters, above) and Amanda's angry dad. Unfortunately that was about as complex as the promising plot got. We also saw the reboot/prequel/reimagining/whatever it is of The Thing, which is essentially the exact same story as John Carpenter's 80s remake, with a good cast but no subtlety.

And then there was the notorious sequel The Human Centipede II (Full Sequence), which was momentarily banned in the UK when the British Board of Film Classification didn't even want to let people over 18 see the film. Now they have butchered nearly five minutes from the film, but I doubt it would have hung together any better. I also caught the American independent fantasy Judas Kiss, an enjoyably odd little story about a filmmaker who gets the chance to fix his own past mistakes. And then there was the extremely odd British documentary This Our Still Life, in which Andrew Kotting returns to his family home in the Pyrenees for another perplexing, kaleidoscopic exploration of something or other (I'm not completely sure).

This coming week I'll be catching up with press-screened films I missed during the festival, including Johnny Depp's The Rum Diary, Aardman animation's Arthur Christmas, James Gandolfini's Welcome to the Rileys, the British ensemble comedy How to Stop Being a Loser and the love story Romantics Anonymous. Plus I plan to revisit remastered versions of Francis Coppola's The Outsiders, One From the Heart and The Conversation, none of which I've seen since the early 80s. Looking forward to that!
Posted by Rich Cline at 23:43 No comments: