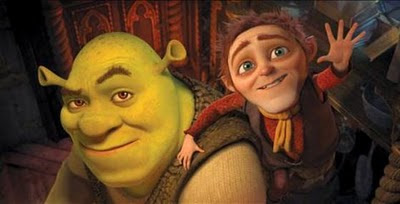 I've been on holiday for the past week (I'm writing this from the airport on my way home, actually), and I managed to catch two new releases in the States that won't be out for a month or so in the UK. By far the best was Shrek Forever After, although it's an oddly bittersweet mid-life comedy rather than the manic fun of the first two films (at least it's an improvement on the rather dull part 3). By far the worst was MacGruber, based on Saturday Night Li ve's absurdly silly MacGyver pastiche sketches - but this film abandons the comedy in lieu of easy vulgarity. Most filmgoers should steer well clear.

Otherwise, the airline's video on demand didn't have any films I hadn't seen (besides a few I'd deliberately skipped). But before I left London I caught up with the surprisingly wonderful French comedy The Concert, which cleverly mixes nutty farce with real emotion. There were also the offbeat, scruffy, not unlikeable Catherine Zeta-Jones rom-com The Rebound, the low-key but very smart comedy-drama Please Give, and the Argentine Oscar winner The Secret in Their Eyes, a sort of dramatic whodunit that is quite simply one of the best films I've seen in the past year.

On arrival in London, I have screenings of Sylvain Chomet's new animated hit The Illusionist, Oliver Stone's latest Latin-America doc South of the Border and the hyped-up sequel Sex and the City 2, which isn't screening to the press until 9pm on Thursday so no advance rewiews appear anywhere. Kind of makes you wonder....
Posted by Rich Cline at 23:52 No comments:

He-man actors dominated the press screenings this past week with pure muscle. First there was Jake Gyllenhaal in Prince of Persia: The Sands of Time, a whizzy romp through ancient Middle East history with vivid action, elaborate effects and abs of steel. And then there was Russell Crowe romping through olde England in Ridley Scott's Robin Hood reboot, which is actually a prequel to the tales we're used to seeing, and a pretty meaty one at that, complete with an Oscar-calibre turn from Cate Blanchett.
More cerebral men were on hand in two low-key comedies: Kevin Spacey as a Los Angeles therapist in the intriguing Shrink and Ben Stiller as a dysfunctional Los Angeleno in the introspective Greenberg. The week's biggest surprise was the terrific Robin Williams black comedy World's Greatest Dad, while the most pointless remake of the year award goes to the American version of 2007 Brit-com Death at a Funeral. Off the beaten path we had Noel Clarke's fractured heist thriller 4.3.2.1, Andrew Kotting's deliberately obscure French fable Ivul, and the offbeat and rather irresistible end-of-the-world comedy Fish Story from Japan.
I only have a few films before I'm off on holiday for a week or so: the Russian-French comedy The Concert, the Catherine Zeta-Jones romance The Rebound, Catherine Keener in Please Give, and finally the Argentine Oscar winner The Secret in Their Eyes. which I've been trying to catch up with for weeks. And I come home to Sylvain Chomet's new animation The Illusionist, Oliver Stone's documentary South of the Border and the hyped-up sequel Sex and the City 2. And if I see one movie while I'm on holiday, it'll probably be Shrek Forever After.
Posted by Rich Cline at 23:27 No comments:

Critical Week: The horror, the horror

Last week's big event was the unveiling of the new version of A Nightmare on Elm Street, yet another unnecessary horror remake from Michael Bay's Platinum Dunes. Not only is it unoriginal and never scary, but it wastes the skills of Oscar-nominee Jackie Earle Haley. But never mind, because today's teen audiences aren't exactly discriminating.
Much better horror was had in [REC]², the sequel to the Spanish hit (which was remade in America, shot-for-shot, as Quarantine). Surprisingly, the filmmakers actually come up with some clever ways to push the story further, as well as some nifty ways to scare us along the way.
Other happy surprises were two romantic comedies: She's Out of My League turns out to be an effectively sweet rom-com rather than just another lame sex comedy; and Heartbreaker is a hugely engaging romance starring the charming Romain Duris and Vanessa Paradis. Another pair of films from the USA and France were less effective: Brooklyn's Finest has a superb turn from Ethan Hawke but never really rises above the level of a TV cop show; and Coco Chanel & Igor Stravinsky is intriguing but rather dull, although it features a terrific performance from Mads Mikkelsen. And finally there was Petropolis, a beautifully poetic doc consisting almost solely of aerial shots of a massive oil-mining operation in Canada.
Next week's offerings include another remake, an American version of British comedy Death at a Funeral, as well as Jake Gyllenhaal as the Prince of Persia, Robin Williams as the World's Greatest Dad, Noel Clarke's 4.3.2.1, Andrew Kotting's Ivul, the Romanian drama The Happiest Girl in the World and the Japanese end-of-the-world comedy Fish Story.
Posted by Rich Cline at 23:25 No comments: