The most talked-about screening in London this week was for Steven Soderbergh's superb Liberace biopic Behind the Candelabra, featuring revelatory performances from Michael Douglas, Matt Damon and a superior supporting cast. The film is so good (it also took Cannes by storm) that everyone is perplexed as to why HBO didn't put it in cinemas for a week to make it eligible for the Oscars. So look for it to mop up awards from Bafta, the London Film Critics and probably Emmys and TV Golden Globes as well. We also had a last-minute screening of The Hangover Part III, at which critics laughed just once, leaving us even colder than Part II did.

More interesting were two smaller thrillers: Blood, starring Paul Bettany and Stephen Graham, and Black Rock, with Katie Aselton, Kate Bosworth and Lake Bell - both are effectively unsettling (the girls' film is actually scary). And further afield, we caught up with Studio Ghibli's From Up on Poppy Hill, another beautifully mature animated drama; the arty and involving French odyssey Atomic Age; and a pristine rerelease of John Schlesinger's 1972 forgotten gem The King of Marvin Gardens, with marvellous against-type turns from Jack Nicholson, Ellen Burstyn and recent Cannes-winner Bruce Dern.

This coming week I'll be seeing Ethan Hawke in the horror film The Purge, Logan Lerman in the comedy Stuck in Love, the human trafficking drama Eden, Travis Matthews' controversial I Want Your Love, the British drama Dream On, the first in Ulrich Seidl's trilogy Paradise: Love, the German romance Men to Kiss, and the Johnny Cash doc My Father and the Man in Black.
Posted by Rich Cline at 12:59 No comments:

Critical Week: And I feel fine

By far the most enjoyable press screening of the past week was the apocalyptic comedy This Is the End (with James Franco, Jonah Hill, Craig Robinson, Seth Rogen, Jay Baruchel and Danny McBride, above). Reviews are embargoed for a couple of weeks so I can't say any more. We also had screenings of Baz Luhrmann's lavishly entertaining version of The Great Gatsby, which sharply captures the hollowness under the hedonistic excess. Then there was the underwritten British spy thriller The Numbers Station starring John Cusack, and Marlon Wayans' ghost-movie spoof A Haunted House, which is better than it looks but still a missed opportunity.

Further off the beaten path we had the fragmented British romance/drama/romp Spike Island, a choppy story about teen Stone Roses fans in 1990; the topical and deeply involving low-budget German drama The Visitor; and a 50th anniversary restoration of John Schlesinger's timeless British comedy Billy Liar, starring the fabulous Tom Courtenay and Julie Christie. It's simply wonderful - get your hands on a copy.

Just before it opens, the press will finally get to see the end of the trilogy with The Hangover Part III. I also have screenings of Steven Soderbergh's Liberace biopic Behind the Candelabra, the thriller Black Rock, Studio Gibli's From Up on Poppy Hill, the Canadian comedy The Year Dolly Parton Was My Mum and the French drama Atomic Age. And it's another long weekend here, so maybe I can carry on catching up with my stack of DVD screeners.
Posted by Rich Cline at 22:39 No comments:

Requisite Blog Photo vs The Apocalypse 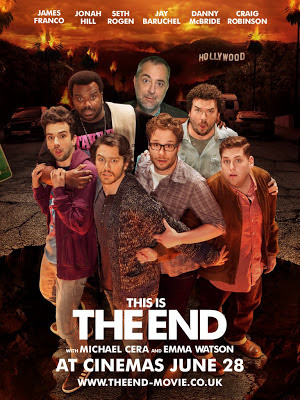 Critical Week: Man in the mirror

Michael Shannon held our attention at the press screening of his new thriller The Iceman, based on the true story of a mob hitman - a gritty, punchy film with superior performances. The other big movies this week weren't quite as smart: Fast & Furious 6 is the polar extreme, with idiotic action that's enjoyable but starting to feel stale; the animated adventure Epic is visually amazing, with some terrific comical moments and action scenes but an uneven, simplistic tone; and The Moth Diaries is a suitably gothic and creepy drama set in an isolated girls' school that struggles to reach a decent payoff.

From off the beaten path came the Austrian fable The Wall, a kind of female Robinson Crusoe in the mountains story that is too literary for its own good. Blackfish and We're Not Broke are two extremely well-made docs that get our blood boiling about psychological cruelty to animals and corporate collusion with politicians, respectively. And Pasolini's 1968 masterpiece Theorem is a challenging, surreal exploration of class and culture starring a strikingly young and seductive Terence Stamp.

Coming this week is a very late press screening of Baz Luhrmann's The Great Gatsby (it's timed to coincide with the opening night screening at Cannes), Emma Watson in The Bling Ring, Seth Rogen and James Franco in This Is the End, Robert Redford's political drama The Company You Keep and the comedy A Haunted House.

And no, I'm not going to Cannes, staying in rainy London instead... 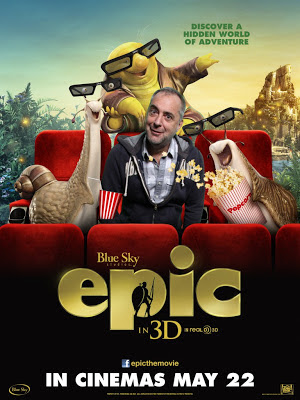 Email ThisBlogThis!Share to TwitterShare to FacebookShare to Pinterest
Labels: epic

London was the centre of the Star Trek universe last week with the first press screenings of JJ Abrams' Star Trek Into Darkness, an epic press junket at City Hall looking over the river at the skyline (not burning in real life but glistening in the spring sunshine) and a mammoth world premiere in Leicester Square. I attended two press screenings and hugely enjoyed the film both times. It's definitely one for the fans, as those who don't know the back-story will struggle to understand the significance of the plot and characters, but the cast is terrific. Benedict Cumberbatch, Chris Pine, Zachary Quinto, Simon Pegg, Zoe Saldana, Karl Urban and Alice Eve were all on great form at the press event.

Also last week, we had Paul Walker in the rather implausible but involving Johannesburg road thriller Vehicle 19, Tim Roth and Jack O'Connell in the darkly comical British crime thriller The Liability, Alexey Balabanov's violent and pointed black comedy The Stoker, and the Belgian-Turkish culture clash drama-romance Mixed Kebab. I also planned a Madeline Kahn marathon over the long weekend with friends who had never seen her best work. We thoroughly enjoyed the genius of What's Up Doc and Young Frankenstein, but the warm sunshine tempted us to put off Blazing Saddles for another day. Frankly, those are three films I could happily watch on a loop.

This coming week, we have Baz Luhrmann's The Great Gatsby, the uber-reunion sequel Fast & Furious 6, Michael Shannon in The Iceman, the animated adventure Epic, the German fable The Wall, the acclaimed doc Blackfish, and a second attempt to see the Brazilian doc Tropicalia after a projector issue cancelled last week's screening. I also still have to see those reissues: Theorem, The King of Marvin Gardens and Billy Liar - let's hope for bad weather this weekend!
Posted by Rich Cline at 17:25 No comments:

Jason Statham strutted through the London press screening of Hummingbird, a much more thoughtful and darkly emotional thriller than he usually offers us. Set in Soho, Chinatown and Covent Garden, it was also fun to see the streets outside the screening room represented so stylishly. More action came in two "dead" movies: Colin Farrell and Noomi Rapace are both on very personal revenge missions in Dead Man Down, a stylish but nonsensical mob thriller that holds our interest even if we never believe it; and Eric Bana and Olivia Wilde are outlaw siblings in Deadfall, a stylish but nonsensical family dysfunction thriller that shifts into deranged guilty pleasure mode as it goes along, largely thanks to Sissy Spacek.

We also had a double dose of unsettling nastiness in The Seasoning House, a dark dramatic thriller about a rather too-grubby brothel in the 1990s Balkans, and the gimmicky 26-part The ABCs of Death, a mixed bag of good, merely ok, bad and utterly pointless shorts. The most original film of the week was the gentle Italian drama Shun Li and the Poet, about a lovely friendship between two immigrants in a fishing village near Venice.

I saw rather a lot more films this past week as part of the Sundance London Music and Film Festival - scroll down for comments on all of those.

This coming week, the big one screening for the London press is Star Trek Into Darkness - plus a press conference with the entire cast and crew. And we also have Paul Walker in Vehicle 19, Alex Balabanov's The Stoker, the Brazilian doc Tropicalia and three newly restored classics: Tom Conti in John Schlesinger's Billy Liar (1963), Terence Stamp in Pier Paolo Pasolini's Theorem (1968) and Jack Nicholson in Bob Rafelson's The King of Marvin Gardens (1972).
Posted by Rich Cline at 10:02 No comments: