Critical Week: Revenge of the Fanboys 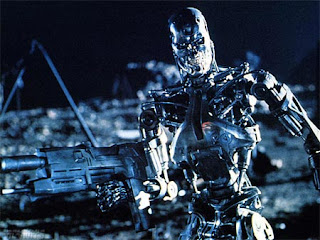 Well, it has been 25 years since the first film, after all. So you wouldn't expect T4 to have the same ethos or style as T1. But Terminator Salvation turned out to be a much bigger drift than expected - a vacuous action cliche that looked like it was inspired by a videogame, with wafer-thin characters and dopey action sequences. It may look so cool on screen that most fanboys won't notice, but it's essentially a franchise-killer.

Last week's other sequel was Night at the Museum 2, or to use its overwrought American title: Night at the Museum: Battle of the Smithsonian (was, maybe, Night at Another Museum too subtle and complex?). That aside, this film was surprisingly better than the original, which isn't saying much. But at least it keeps us laughing with some hilariously bizarre improvised dialog, plus the nutty skills of Hank Azaria and the raw charm of Amy Adams.

The other biggies last week were Sam Raimi's return to horror in Drag Me to Hell, a rollicking funhouse of a movie that's deeply entertaining in its willingness to get truly, gleefully ugly, and the remake of The Taking of Pelham 123, which is a guilty pleasure concoction of preposterous action and even more preposterous acting. More serious - and more satisfying - were the thoughtful Brazilian rainforest drama BirdWatchers, the twisty Spanish mathematics thriller Fermat's Room and the powerfully emotional French family drama The First Day of the Rest of Your Life.

This week is a bit thin on press screenings at the moment: just the Beyonce bunny-boiler Obsessed, Ken Loach's Cannes charmer Looking for Ericthe Burmese protest doc Burma VJ, another festival favourite, and the doc Soul Power, about a 1974 music festival in Zaire.
Posted by Rich Cline at 22:28 No comments:

Critical Week: The morning after 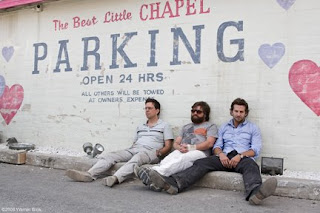 It was another eclectic week in the screening rooms, with a dizzying array of films from every genre imaginable. Although it didn't quite leave me as shattered as the three guys in The Hangover, the raucous comedy that's simplistic and stupid and absolutely hilarious. Sam Rockwell's rude awakening in Moon sets up one of the most intriguing sci-fi thrillers in years, with heavy echoes of Silent Running, 2001 and Solaris. And Audrey Tautou is also terrific as the designer emerging from her dark youth in Coco Avant Chanel. By contrast, Vincent Cassel's riveting performance as French criminal Jacques Mesrine offers no awakening at all - his kinetic, energetic, fiercely relentless two-part story is told in Mesrine: Killer Instinct and Mesrine: Public Enemy No 1.

Much more cathartic was the wonderful Sophie Okonedo in the astonishing South African drama Skin, featuring remarkably brave supporting turns by Sam Neill, Alice Krige and Tony Kgoroge. And even though it's been on a shelf for three years, Blind Dating has some terrific moments and a solid central turn by Captain Kirk, aka Chris Pine. On the other hand, we also had a couple of British horror films: the low-key and deeply haunting The Disappeared and the wacky Danny Dyer-Stephen Graham zombie romp Doghouse. And I also caught up with a couple of gorgeous Bruce Weber films on DVD (A Letter to True and especially Broken Noses) and had the opportunity to interview experimental filmmaking guru Kenneth Anger, who's still feisty and chatty at 82. Whew!

This week looks like another head-spinning foray into cinema, from Sam Raimi's Drag Me to Hell to the act-a-thon remake of The Taking of Pelham 123, by way of the Guarani drama Birdwatching, the award-winning French family drama The First Day of the Rest of Your Life, and a little sequel titled Terminator: Salvation.
Posted by Rich Cline at 11:51 No comments: 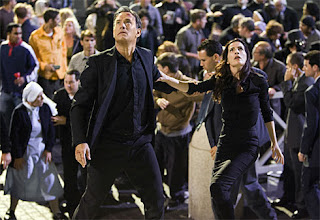 I must admit that I went to the press screening last week of Angels & Demons with very low expectations, because I'd found The DaVinci Code such a huge disappointment three years ago (the novel is a page-turning romp; the film is an over-serious slog). Thankfully the sequel, which is actually based on an earlier novel, gets the tone right, rampaging through the action with never-mind-the-plot-holes gusto. And Tom Hanks even seems to get into the spirit this time, with loads of ludicrous action to go with his exposition-heavy dialog.

Even more fun last week was seeing Star Trek again, but this time on the Imax screen, where the images are so big you can see the actors' pores. Even more impressive than the seamless special effects in Imax was the astounding sound mix. Other films included the dark Hungarian drama Delta, the ethereal French drama 35 Shots of Rum, the moody British drama Shadows in the Sun and two straight-to-DVD releases: the emotive American high school musical Shakespeare mash-up Were the World Mine and the eerie French drama The Last or the Crazy People. We also had the launch event for the 63rd Edinburgh International Film Festival (17-28 June), which will open with Sam Mendes' new film Away We Go.

This is another busy week, screening-wise, with both parts of the French crime thriller Mesrine starring Vincent Cassel, the Vegas romp The Hangover, Sam Rockwell in the astronaut drama Moon, Chris Pine in the comedy Blind Dating, the Spanish thriller Fermat's Room, the British horror The Disappeared, and Danny Dyer and Stephen Graham in Doghouse, yet another British zombie comedy.
Posted by Rich Cline at 13:44 No comments: It's official blockbuster season again, which means that virtually every week we'll get another mammoth, over-produced movie that hopes to attract your weekend spending money. This year's first summer tentpole is the cheesily titled X-men Origins: Wolverine, which brings Huge Action back to his iconic role as the hairy, muscled, claw-wielding mutant hero from the three X-men movies. After one of Fox's employees leaked the film online, they clamped down security and didn't let anyone see the film before last Monday. It does what you expect: bludgeons you with Wolverine's back-story. Although it lowers the tone even further than the third movie, by not only eliminating all subtext, but leaving out a coherent plot or any point at all. Even so, it's pretty watchable.

Other films last week includes the Matthew McConaughey Christmas Carol pastiche rom-com Ghosts of Girlfriends Past, which was also watchable and pretty bad; the clever Japanese black comedy Funuke, about a seriously dysfunctional family; the rather gloomy doc The End of the Line, which looks at how humanity has been fishing all the life out of the sea; the clever suburban drama The Private Lies of Pippa Lee, featuring a terrific performance from Robin Wright (formerly Penn); the superb indie comedy-drama Sunshine Cleaning, with fantastic performances from Amy Adams and Emily Blunt; the uneven British rom-com pastiche French Film, with the watchable Hugh Bonneville and Anne-Marie Duff; the surreal Mexican drama I'm Gonna Explode; and Godard's indulgent 1960s romp Pierrot le Fou.

Coming up this week is the summer's next blockbuster, Star Trek, which I've already seen but will get to watch again on the massive Imax screen; the blockbuster after that, Tom Hanks' return to DaVinci territory in Angels & Demons; the British drama Shadows in the Sun with Jean Simmons and James Wilby; Claire Denis' new film 35 Shots of Rum; and the acclaimed Hungarian drama Delta. We also have the programme launch for next month's Edinburgh Film Festival. And the tentpoles will keep on coming.
Posted by Rich Cline at 23:38 No comments: