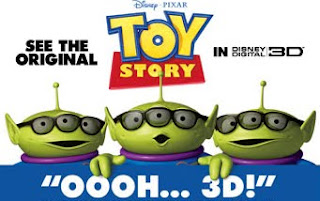 In a week when I saw nine films in the cinema, it turns out that a 14-year-old animated movie was the best of the bunch. But that's hardly surprising when the film in question is Toy Story, which is about to be reissued in 3D. It's almost like it was made in 3D to begin with - it looks absolutely fantastic even after all these years (except that pesky dog), and the story is so much richer and more engaging than most of what we see now.
I also enjoyed, but not as much as I'd hoped, Ricky Gervais' low-key fantasy-comedy The Invention of Lying. Other films last week can be grouped in groups: futuristic action-horror (the cheesily entertaining Surrogates and the dire Pandorum); low-budget, high-concept horror (the decent Triangle and only ok Exam); and a trio of random documentaries (the cinephile's film history dream Henri-Georges Clouzot's Inferno, the clunky but interesting Vanishing of the Bees, and the far-too enjoyable guitar doc It Might Get Loud).
Another nine movies this week, including four press screenings for the London Film Festival (which starts on 14th Oct), along with three more horrors: the Diablo Cody/Megan Fox terror-comedy Jennifer's Body, the Brit-sequel The Descent Part 2 and the South African romp Surviving Evil - plus a British drama called I Know You Know and Robert Guedegian's war drama Army of Crime.
Posted by Rich Cline at 20:05 No comments:

Critical Week: Blow it up

It wasn't a hugely busy week for press screenings, and the one film I actually wanted to see had no screenings at all - so there I was on Wednesday, buying a ticket at my local Odeon for Gamer, the latest action mayhem from Neveldine/Taylor. I quite enjoyed their Crank movies, but this one felt almost humourless by comparison - just a series of well-staged massive explosions that never made the most of a genuinely intriguing premise.
Other films this week included the surprising Departures, which shocked everyone by winning the foreign film Oscar (over the acclaimed Waltz With Bashir, The Class, Revanche and The Baader-Meinhof Complex) - and watching it, we can see why, since it carries a seriously emotional kick. We also saw the offbeat animated monster movie 9, the skilful and slightly too-quirky London drama Unmade Beds, the awkward gay drama The Art of Being Straight, and the engaging Canadian doc Died Young Stayed Pretty, about the artistic obsessives responsible for vintage rock poster culture.
The schedule is back to overflowing this week, with big movies like Ricky Gervais' The Invention of Lying, Bruce Willis in Surrogates and Dennis Quaid in Pandorum. There are two British thrillers: Christopher Smith's Triangle and Stuart Hazeldine's Exam, and two docs: Vanishing of the Bees, which is rather self explanatory, and It Might Get Loud, about three electric guitar virtuosos. I have no idea what Henri-Georges Clouzot's Inferno will be like, although it has been making the festival round this year. And I'm really looking forward to revisiting the original Toy Story in 3D.
Posted by Rich Cline at 22:52 No comments:

Critical Week: Off the grid 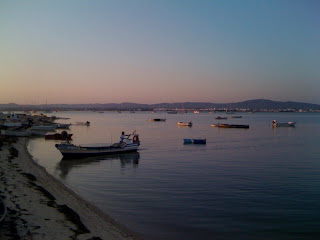 There won't be a proper blog this week, as I took drastic action and went to Portugal last week, spending six whole days without email or phones. I also didn't see a single movie. The photo (snapped with my phone) shows the view from the front of the house on the island of Culatra, across from Faro. I need to do this more often!
This week's screenings include the animated feature 9, the British indie Unmade Beds, the action romp Gamer, the rock poster doc Died Young Stayed Pretty, and the Oscar-winning Japanese film Departures. It's a relatively easy re-entry to screenings before the following week, during which I already have eight films in the diary. And then press shows for the London Film Festival start. No sleep until November...
Posted by Rich Cline at 20:43 No comments: 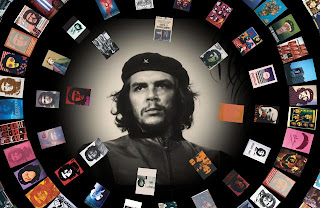 Press screenings last week were a bit unusual, as I caught up with several things that are far off the beaten path. The most, erm, iconic film was Chevolution, a fascinating documentary about that ubiquitous photograph, which has become the global logo for people power. The thoroughly entertaining film also tells the story of Che Guevara and the photographer who snapped the pic in 1960.
Also last week, I saw one of my favourite films of the year so far: Tricks, a disarmingly well-made little film by Polish filmmaker Andrzej Jakimowski. There was also Steven Soderbergh's experimental sex/money drama The Girlfriend Experience; the award-gobbling and rather gorgeous French painter biopic Seraphine; the well written and played coming out drama Mulligans; and the surfing doc Bustin' Down the Door, which is fun to watch but pretty much like most surfing docs. And I also caught up with Michael Winterbottom's astonishing debut feature Butterfly Kiss (just reissued on dvd), an unforgettable road movie with a fierce central performance from Amanda Plummer.
In addition, I had time for two theatre nights: Priscilla Queen of the Desert is a rowdy and colourful musical version of the film, and I Bought a Blue Car Today is a one-man show with Alan Cumming singing songs and telling witty stories from his life in film and theatre. Both were great nights out!
And now I'm on holiday for a week - not even taking the laptop - so the blog will take a break next week as well. I'm not even sure what I'll be watching when I get back - I only have two screenings in the diary: the festival favourite Unmade Beds and the animated monster movie 9.
Posted by Rich Cline at 10:15 No comments:

Well, it took until the fourth film in the series, the oddly non-titled The Final Destination, for those bright sparks at Final Destination Inc to come up with the idea of using 3D to make their deranged black comedies leap off the screen and into fans' faces. And the film is so much fun (and such a box office success) that it's likely to reignite the franchise.
That was the highest-profile film screened to the London press last week, just days before its release. We also saw Heartless, an atmospheric and enigmatic horror mystery with Jim Sturgess; My Life in Ruins, the latest big fat Greek comedy from Nia Vardalos; Me and Orson Welles, an offbeat little period drama from Richard Linklater starring Zac Efron and the amazing newcomer Christian McKay; Le Donk and Scor-zay-zee, an hilarious mock-doc by Paddy Considine and Shane Meadows; Tulpan, a thoroughly engaging rural Kazakh drama; Antarctica, a slightly uneven ensemble romance from Israel; and two horror classic remakes: the less than thrilling demon-baby romp It's Alive and the guilty pleasure rampage of Sorority Row (the screening for which was introduced by a giggling Briana Evigan and Rumer Willis).

This coming (short) week isn't nearly as hectic, with just four screenings: Steven Soderbergh's experimental The Girlfriend Experience, the acclaimed French biopic Seraphine, the Polish thriller Tricks and the surfing doc Bustin' Down the Door. I'll also finally catch up with Michael Winterbottom's noted feature debut Butterfly Kiss, which is being reissued this week, and I even have a free evening that I can give to the theatre, namely the camp stage musical version of Priscilla Queen of the Desert. With a front-row seat, it's bound to be in my face indeed...
Posted by Rich Cline at 17:10 No comments: