Critical Week: Get out, girl!

London-based critics had a chance to catch a press screening of Effie Gray, the true story of a Victorian woman (Dakota Fanning) trying to get out of a sexless marriage so she can run off with a hot painter (Tom Sturridge). Written by and costarring Emma Thompson, it's refreshingly dark and female-focussed. Another bad marriage is at the centre of David Fincher's Gone Girl, although novelist Gillian Flynn's screenplay leaves no doubt who we're supposed to root for. At least both Ben Affleck and Rosamund Pike give marvellously layered performances. Susan Sarandon stars in The Calling, a Fargo-style rural-cop mystery that gets surprisingly, and entertainingly, dark. And Steve Carell leads the family antics in the lively comedy Alexander and the Terrible Horrible No Good Very Bad Day.

A little further afield, John Lithgow and Alfred Molina are terrific as a long-time couple whose life takes a turn in the New York drama Love Is Strange; New Zealand comics Jemaine Clement and Taika Waititi are hilarious in the reality-TV style vampire comedy What We Do in the Shadows; and the American indie comedy-drama Believe Me takes a knowing jab at organised religion.

I also had several screenings as part of the run-up to the London Film Festival (which begins on 8th October): The Keeping Room is an American Civil War horror drama starring Brit Marling and Hailee Stainfeld; Queen & Country is John Boorman's post-war comedy-drama; The Duke of Burgundy is Peter Strickland's astounding exploration of a relationship; the drug-running thriller El Nino is Luis Tosar and Daniel Monzon's followup to Cell 211; A Girl at My Door is a cleverly unnerving Korean drama; and Bjork: Biophilia Live (codirected by Strickland) is a film of the last night in the Icelandic musician's concert tour.

This coming week we'll be watching Jake Gyllenhaal in Nightcrawler, Bill Murray in St Vincent, John Cusack in Drive Hard, and Joan Allen in A Good Marriage, plus LFF screenings for Bypass, Charlie's Country, Next to Her, Wild Life, Dear White People and more...
Posted by Rich Cline at 16:35 No comments:

One of the quirkier press events critics face is the presentation of footage from an unfinished film. Sometimes this involves chatting with filmmakers and cast members while watching scenes that aren't quite complete, other times they show us essentially an extended trailer. Usually we don't want to see snippets and scenes before we have a chance to see the whole film, but Disney's upcoming animated adventure Big Hero 6 is rather interesting, and they lured us along with promises of a San Fransokyo breakfast (turns out that sushi is rather delicious at 10am) as well as a screening of the completed short film Feast (above), which will accompany the feature. Producer Roy Conli had so much energy that he easily whipped us into a frenzy of anticipation for the movie. The footage we saw (about 30 minutes total) was seriously impressive, and Feast is simply amazing. The film opens in November in the US and January in the UK, so who knows when UK critics will see the whole thing.

As for regular screenings, we were shown two big films just days before they opened in Britain: Magic in the Moonlight is a warm and funny rom-com from Woody Allen with Colin Firth and Emma Stone, while The Giver is yet another teen dystopia thriller with a potent cast including Jeff Bridges, Meryl Streep and Brenton Thwaites. Kevin Costner is terrific in Draft Day, an NFL variation on Moneyball that's likely to struggle to find an audience outside America. The Babadook is a fiercely clever horror film from Australia, layering the terror with deeper meaning. Not Cool is a silly comedy that has a bit of unexpected substance. And there were two dreamy and ultimately rather cold freak-outs: The Scribbler dips into mental illness, while You and the Night touches on sex-obsession.

Press screenings are also underway for the 58th BFI London Film Festival (which runs 8-19 October). I've caught up with a few, including Jason Reitman's Men, Women and Children, Christophe Honore's Metamorphoses, the period Maori action movie The Dead Lands and a new documentary about Hockney. Comments will come during the festival.

Coming this week along with the LFF screenings: Ben Affleck and Rosamund Pike in Gone Girl, Dakota Fanning in Emma Thompson's Effie Gray, Susan Sarandon in The Calling, Ira Sachs' Love Is Strange, Peter Strickland's The Duke of Burgundy, Michael Bay's take on Teenage Mutant Ninja Turtles and more...
Posted by Rich Cline at 17:29 No comments:

Shadows on the Stage: Briefs is back!

Australia's irreverent acrobatic burlesque Briefs has taken London's Wonderground by storm for the third year running, returning with a slightly tweaked version of last year's Second Coming show. The sold-out spiegeltent buzzes with laughter, applause and raucous cheering throughout a string of eye-popping performances that playfully explore the physicality of masculinity by bending all the rules. 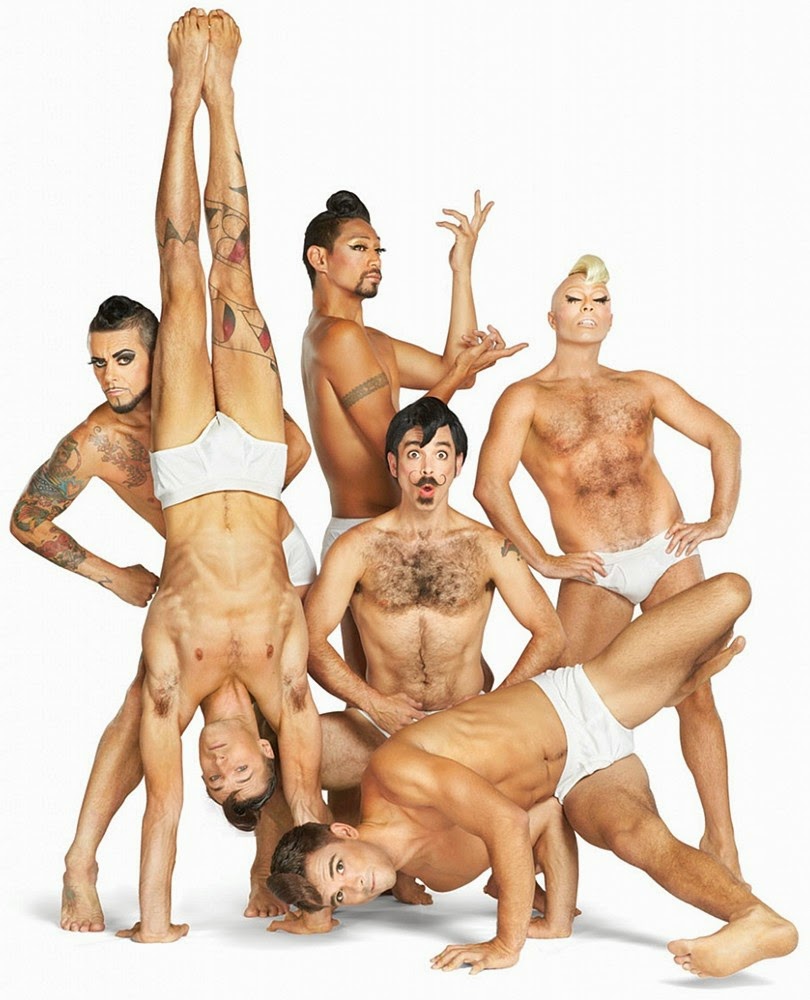 There's a new cast member this year, offering some new performances, although Second Coming is still less jaw-dropping than Briefs' first show in 2012, which focussed much more on circus-style physicality than music and comedy. With sassy vaudeville linking performances from fabulously snappy host Fez Faanana, the show kicks off with a stunning aerial routine by the surreally bendy Tom Flanagan and never lets up. Each routine merges into the next, with each guy showing off his own talents while stripping down to a g-string. Or a jaunty themed sock.

Along with the more athletic performances, the androgynous Dallas Dellaforce offers a series of performance pieces that challenge ideas of gender, while the team's 20-year-old youngster does some impressive hat-juggling, yoyo-twirling and Rubik's Cube-solving. Other highlights include the evil monkey-boy's staggering on-point ballet mayhem. And the headliner Mark Winmill offers the two most unforgettable routines: as a trashy, bikini-clad dog owner (brace yourself for the punchline) and then delivering an outrageous climactic trapeze routine, which involves a gigantic martini glass (sit in the front row at your peril).

The pacing of Second Coming isn't quite as full-on as the first show, with perhaps a few too many comedy/dance routines string together between the bigger show-stoppers. As a result, a couple of the bits feel like filler. But the sheer physical skill, flashy invention and anarchic refusal to take anything seriously make it utterly unmissable. I know I'll be back next year for whatever they come up with.

Briefs: The Second Coming runs 28 August - 28 September 2014 at London Wonderground on the Southbank.
Posted by Rich Cline at 09:24 No comments:

I caught up with one of my most-anticipated films of the year this week, and it certainly didn't disappoint. Not only am I an unapologetic Julianne Moore fan, but films by David Cronenberg have been thrilling and tormenting me since I started writing about movies (starting with Scanners and Videodrome). Maps to the Stars challenges audiences with a glamorous and gruesome trawl through Hollywood's inbred underbelly. Cannes Best Actress Moore is of course amazing, as is another favourite of mine, Olivia Williams. There are also offbeat, clever performances from Mia Wasikowska (above), Robert Pattinson, Evan Bird and John Cusack.

It was a busy week, as I got back up to speed after five days off. Big movies included Denzel Washington and Antoine Fuqua's slick but formulaic The Equalizer, loosely based on the 1980s TV series; the rather off-putting British posh-university drama The Riot Club, which has a terrific rising-star cast including Sam Claflin, Max Irons and Douglas Booth; and Claflin in rom-com mode opposite Lily Collins in Love, Rosie.

There were also two foreign films: the Brazilian drama The Way He Looks, which won the Teddy at Berlin, is an utterly charming coming-of-age movie expanded from the award-winning short I Don't Want to Go Back Alone; and Human Capital is a strikingly bold Italian film that kind of bungles its central theme but thrills with its twisty plot. And there were four docs: Filmed in Supermarionation is the lively and witty story of Gerry Anderson (best known for Thunderbirds); Born to Fly features the goosebump-inducing work of Elizabeth Streb's acrobatic dance/circus group; I'm a Porn Star gets up close and very personal in the gay adult-movie business; and Dick: The Documentary is pretty much what it says on the tin: a group of men photographed from the neck down as they talk about their, ahem, masculinity.

This coming week we have Woody Allen's Magic in the Moonlight with Colin Firth and Emma Stone; Jason Reitman's Men, Women & Children with Adam Sandler and Emma Thompson; The Giver with Meryl Streep and Jeff Bridges; the Pittsburgh comedy Not Cool; the Aussie horror movie The Babadook; the multiple-personality thriller The Scribbler; and the British painter documentary Hockney. We're also cranking up for the 58th London Film Festival, which runs 8-19 October - press screenings start next week.
Posted by Rich Cline at 11:12 No comments:

There's nothing like seeing a favourite film on the big screen where it belongs, and this week I got to revisit The Wizard of Oz remastered in Imax 3D. The film is as amazing (and as marvellously deranged) as ever, with an astonishing level of detail in the big-screen digital restoration. This is the way the film should be seen. Even the sepia prologue (with the heart-stopping Over the Rainbow, above) is spectacular.

London critics were also treated to screenings of the energetic and rather wonderful animated adventure The Boxtrolls; the well-acted and involving American ensemble drama About Alex, which is clearly channelling The Big Chill; Agyness Deyn in the artful and somewhat indulgent British drama Electricity; and the strikingly moving Venezuelan drama My Straight Son, which tackles almost too many huge issues but remains personal and resonant.

This post is rather late in the week for one simple reason: I was getting ready to go on holiday and forgot to add "blog" to my to-do list. Working as a freelance offers all kinds of freedoms and work satisfaction, but it also means that I don't get paid vacations; if I go away, I have to do all my work in advance for the time I'm gone. Otherwise I end up working when I should be lounging on a beach with friends!

Anyway, the big film the week before I left was If I Stay, screened very late to UK critics in the week of release. It's had fairly lacklustre reviews, but I thought it was a lot more realistic and involving than the summer's other teenage tearjerker The Fault in Our Stars. It's also just as manipulative emotionally and aimed almost exclusively at prepubescent girls. Leads Chloe Grace Moretz (above) and Jamie Blackley are both terrific.

Also before escaping from Britain, I caught up with Grand Piano, an intriguing, nicely shot and edited mystery-thriller with Elijah Wood; Jackhammer, a relentlessly idiotic male-stripper comedy featuring "where is he now" actor Jamie Kennedy; Luna, Dave McKean's mesmerisingly beautiful and utterly impenetrable British exploration of relationships and emotions; the meandering ensemble drama Turtle Hill, Brooklyn, which feels a bit stagey but has some strong characters; the four-part anthology Eroddity(s), which borders on soft porn but also touches on resonant themes and is actually rather sexy; and the essential documentary Two: The Story of Roman & Nyro, about an utterly normal loving family that breaks all the rules of what we call "normal".

The film I'm most looking forward to now that I'm back in London (after a week in southern France) is The Wizard of Oz remastered in Imax 3D.
Posted by Rich Cline at 10:02 No comments: