There were several starry films shown to critics in London this past week, as many of our colleagues were still in Cannes watching things we won't see here for a few months. The best one was Slow West, a beautifully shot, cleverly paced drama set in the Wild West and starring Kodi Smit-McPhee and Michael Fassbender (above). Melissa McCarthy reunites with The Heat filmmaker Paul Feig for Spy, a raucous action comedy that's profane, violent and utterly hilarious. I see a franchise brewing. Dwayne Johnson tackles the biggest earthquake ever in the rather ridiculously over-the-top disaster movie San Andreas, which opens this week. Rosamund Pike is terrific in the rather underdeveloped post-attack drama Return to Sender. And Guy Pearce and Coby Smulders play duelling personal trainers in the witty but ultimately thin Results.

Off the beaten path, we had the beautifully shot Eden, which traces France's club music scene authentically but without much in the way of character or plot. Also from France, the even more loosely structured Love at First Fight (Les Combattants) at least traces a strongly involving personal journey in two young people who join the army to get away from their boring homes. From China, Black Coal, Thin Ice is a gorgeously artful police thriller that leaves its twisty, surprising mystery plot in the background where it belongs. Oriented is a groundbreaking documentary about three gay Palestinians in Tel Aviv that has a lot to say about Israel's political situation. And finally, The Human Centipede 3 (Final Segment) is the conclusion of Dutch filmmaker Tom Six's insane gross-out trilogy, this time set in an American prison. It's over-the-top, clumsy and frankly awful, but makes some strong points with its satirical-comedy tone. 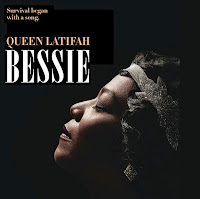 I also caught up with Bessie, the biopic about the iconic blues pioneer Bessie Smith, played beautifully by Queen Latifah. It's a remarkably tough story, directed with flashes of real insight by filmmaker Dee Rees and featuring superb supporting turns by the unstoppable likes of Khandi Alexander, Mo'Nique, Michael Kenneth Williams and Mike Epps, all of whom make their characters startlingly complex. In the end, the structure is a bit tricky to make much sense of, but the characters are so strong that we don't mind much. And the music is simply divine.

This coming week, screenings include Insidious Chapter 3, Jessica Biel and Jake Gyllenhaal in Accidental Love, Charlotte Rampling and Tom Courteney in their Berlin-winning roles in Andrew Haigh's 45 Years, the horror thriller Cub, the aristocrat doc Lord Montagu, and the Open City Docs highlights Before the Last Curtain Falls and Daniel's World.
Posted by Rich Cline at 16:18 No comments:

Screenings in London this past week included two very late-screening films coming out this week: Poltergeist (pictured above) is a remake of the 1982 Spielberg/Hooper classic. It's nicely shot and acted but feels rather exactly like other ghost movies being made at the moment (most notably Insidious). Tomorrowland is a relentlessly optimistic Disney movie starring George Clooney with a strongly positive message, a solid cast and some lovely effects, although it's a bit too simplistic to be something special.

Two other films featured veterans in a relaxed mood: Al Pacino is an ageing rocker in Danny Collins, a chilled-out comedy-drama with strong support from Annette Bening, Jennifer Garner, Christopher Plummer and Bobby Cannavale. Dustin Hoffman is a master conductor in The Choir (aka Boychoir), an enjoyable if somewhat too-earnest coming of age movie.

Further afield: Olivia Colman leads the ensemble (which includes Tom Hardy) in the artfully offbeat musical London Road, using actual transcripts to explore a community's reaction to a serial killer. Everyone's Going to Die is an underpowered British drama about a connection between two extremely mismatched strangers. Unhallowed Ground is a rather cheesy British horror movie that has some terrific freak-out moments along the way. Infini is an underwritten Aussie sci-fi horror that looks cool but fails to develop its characters. And Seek is a scruffy-charming Canadian indie about a geeky journalist looking for his dream man on the nightclub scene in Toronto.

This coming week we have screenings of: Slow West with Michael Fassbender, Mr Holmes with Ian McKellan, Return to Sender with Rosamund Pike, Results with Guy Pearce and the festival favourites Eden and Les Combattants. Plus another three-day weekend!
Posted by Rich Cline at 17:21 No comments:

Shadows on the Stage: Public outrage!

Based on the real story of Victorian cross-dressers Ernest Boulton and Frederick Park, this is a fiendishly clever musical that mixes the gleefully rude comedy of a 19th century music hall with a striking story of identity and sexuality. Played with hilariously flirtatious energy and surprising underlying pathos by Robert Jeffrey and Marc Gee Finch, Ernest/Stella and Frederick/Fanny are theatre performers whose arrest in 1870 sparked a flood of scandalous headlines about these "he-she ladies". Of course, the crime wasn't dressing as a woman on stage, but parading in the streets and having relationships with men.

Chandler's script cleverly casts all of this as a bawdy theatrical production with six actors playing a variety of roles - including a witty running gag in which Phil Sealey must adapt his performance on the spot to fit whatever character he's playing now. The dialog and songs are packed with puns and innuendo, playing with language in ways that actually make an important point even as they make us laugh. All of this is inventively staged in the small space at Above The Stag with a set that pointedly requires the actors to enter and leave the stage through closets. The intimacy also creates a lot of hilarious interaction with the audience, which adds to the snappy script and riotously silly tone. But what lingers is the power of the story itself, which catches in several moments of raw emotion that bring intense resonance for 21st century audience members. 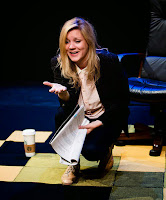 This one-woman show, brilliantly performed by Olivia Poulet, is a lacerating satire about Hollywood. And it's so cleverly written that studio executives might not understand why we're all laughing at it. Poulet plays Leah, who is pitching a project to a top actress, going through the script and punching everything that might appeal to an A-lister. This means that the play works on two levels. First, it draws us into the story in the script, about a workaholic who finds love with a Muslim jihadist, which is unexpected because her husband was killed in the 9/11 attacks. This story is hilariously recounted by Poulet with added stage directions, back-stories and even musical cues in an attempt to bring it to life for the star.

But of course the real point is to explore how Hollywood exploits real-life tragedies to make some cash, while manipulating an audience to think that this is somehow entertaining, warping the very nature of both storytelling and artistry in the process. Ravenhill's script pulls no punches at all; this play goes for the jugular without ever getting preachy about it. And Poulet's Leah shows more than a little desperation, while her reactions make it clear that the unseen actress isn't buying her hard-sell. All of this is done with continual laugh-out-loud punch lines so hilariously sharp that they stop us in our tracks every time we begin to buy into the sales pitch. Genius.
Posted by Rich Cline at 18:52 No comments:

Films don't get much bigger than Mad Max: Fury Road, George Miller's return to the franchise 30 years after Thunderdome. Starring Tom Hardy in the title role (that's him as the grille ornament in the photo above), it's a roaringly entertaining action thriller with startling emotional and thematic depth. Speaking of which, Arnold Schwarzenegger delivers an unusually deep performance in Maggie, an involving father-daughter drama with zombie overtones. And Rupert Everett and Emily Watson play the king and queen in the comedy romp A Royal Night Out, an engaging film that's loosely based on real events in London 70 years ago this week.

Further afield, British critics are finally catching up with Song of the Sea, the stunningly beautiful Oscar-nominated Irish adventure based on local mythology. Second Coming is a low-key British drama starring Idris Elba that feels like it only has enough of a plot for a short, but is very nicely made. From Spain, Marshland is a sharply well-shot serial killer drama that's involving but a little dry. And I also caught up with The Last of Robin Hood, an involving drama directed by Richard Glatzer and Wash Westmoreland (Still Alice), which stars Kevin Kline in a story about the final months of of Errol Flynn's life.

Special screenings this week included Magician: The Astonishing Life and Work of Orson Welles, Chuck Workman's superb doc, screened to the press on Welles' actual 100th birthday to launch the BFI's summer season featuring his films and lots of rare material. And one evening I headed to the Soho Revue Gallery for a screening of the short film Eleanor, an ambitious project starring Ruth Wilson that shows on three screens and carries quite an internalised kick (MY SHORT REVIEW).

This coming week we have George Clooney in the Disney epic Tomorrowland, Al Pacino in Danny Collins, Dustin Hoffman in The Choir, Peter Bogdanovich's comedy She's Funny That Way, the acclaimed horror Unhallowed Ground, the indie sci-fi thriller Infini and the Oscar-nominated doc The Salt of the Earth.
Posted by Rich Cline at 13:45 No comments:

Critical Week: Life of the party

Chris Rock's comedy Top Five had great reviews in America last year, and has finally screened to UK critics ahead of its opening here this week. It's thoroughly hilarious, if a bit of an inside joke. Blake Lively stars in the fantasy-drama The Age of Adaline, very well-made but ultimately rather corny. Gugu Mbatha-Raw gives another thunderous performance in Beyond the Lights, a simplistic but engaging drama about the music industry costarring Nate Parker and Minnie Driver. And the mystery-thriller remake The Loft is packed with twists, turns, surprises and revelations, even if it never amounts to much and doesn't offer too much depth for fine actors like James Marsden, Matthias Schoenaerts, Eric Stonestreet, Karl Urban or Wentworth Miller.

Further afield, there was a screening of the long-shelved feature animation Dino Time, a lively story with substandard imagery and a starry voice cast that includes Jane Lynch, Melanie Griffith and Rob Schneider; Albert Maysles' beautifully made doc Iris, about 93-year-old eccentric fashion icon Iris Apfel; and the murky and sexy but obtuse apocalyptic Argentine love triangle What's Left of Us.