Critical Week: Fooling no one 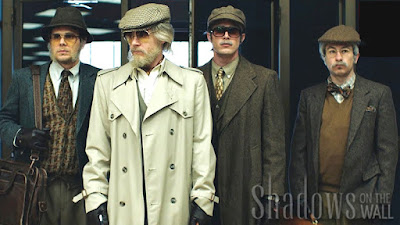 It's been a busy week in the press screening rooms this week, and I saw a few films that have been among my favourites of the year so far. Sundance award winner American Animals (above) is a stunner, a true heist thriller that happily breaks genre rules. Performances are terrific, and Bart Layton's direction is masterful. And Mission: Impossible - Fallout was a very pleasant surprise, easily the best in this six-film series, and the most satisfying action blockbuster of the summer. Tom Cruise even manages to deepen the iconic character he first played 22 years ago.

Playing on our social media culture, Searching is an inventive thriller that is viewed on various screens, yet is also taut, moving and packed with superb performances. Jon Hamm is excellent in The Negotiator (aka Beirut), a gritty and very well-made thriller set in the chaos of early-80s Lebanon. Hot Summer Nights features another solid turn from Timothee Chalamet, but the film itself is too hyperactive and grim to be the pastiche it seems to want to be. And the documentary King Cohen is a joy for movie fans, especially lovers of cult movie guru Larry Cohen.

There were also three small British films: Apostasy is simply excellent, a fair-minded depiction of a crisis within a family of Jehovah's Witnesses that makes us think about our own belief systems. Strangeways Here We Come is an uneven black comedy about a group of neighbours who concoct a murderous plan. And Possum is a somewhat pretentious arthouse thriller about a man with the creepiest ventriloquist dummy in movie history. Finally, the American web-series Paper Boys has been compiled into an involving, nicely flowing little feature about young people trying to start their lives in San Francisco.

This coming week I'll finally catch up with Ant-Man and the Wasp, plus the comedy The Spy Who Dumped Me, offbeat WWII adventure The Captain, coming-of-age drama Brotherly Love, horror comedy Fanged Up, French WWI epic The Guardians, Italian mystery A Sicilian Ghost Story, Portuguese horror The Forest of the Lost Souls, anime fantasy Mirai, and the doc The Eyes of Orson Welles.
Posted by Rich Cline at 21:13 No comments: 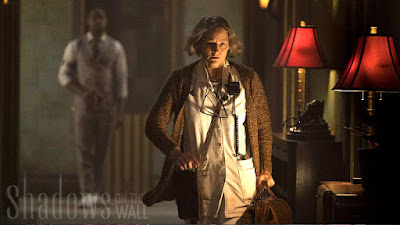 It's been another seriously eclectic week on the press screening circuit! There was Hotel Artemis, a fiendishly stylish futuristic crime thriller starring the superb Jodie Foster, with a terrific supporting cast and some deep, dark resonance. Mamma Mia! Here We Go Again was screened along with an array of Greek-style canapes and colourful cocktails to loosen us up to more Abba antics. It's a lot of fun (Go Cher!), but feels padded out with too many B-side songs. The Little Stranger is a dark, creepy adaptation of the Sarah Waters novel starring Domhnall Gleeson, Ruth Wilson, Will Poulter and Charlotte Rampling. And Glenn Close is absolutely fantastic as The Wife in a riveting marital drama costarring Jonathan Pryce as a Nobel Prize-winning novelist.

A little further afield, Sylvester Stallone was back with Escape Plan 2: Hades, a preposterous but rather enjoyably dopey sequel costarring Dave Bautista (also seen in Hotel Artemis). Jonathan Rhys Meyers does a gloomy James Bond impersonation as a Mossad spy in Damascus Cover, a dry and dated thriller. Oona Chaplin and Natalie Tena take a narrowboat around London's canals as they have a relationship crisis in the engaging, provocative drama Anchor and Hope. The bone-dry Finnish black comedy Euthanizer growls its way through a story about a man fed up with the inhumanity of his neighbours. And Love, Cecil is a lush, lyrical documentary tracing the life of the gifted photographer/designer Cecil Beaton.

This coming week we have Tom Cruise in Mission: Impossible - Fallout, Jon Hamm in The Negotiator (aka Beirut), Timothee Chalamet in Hot Summer Nights, the Sundance hit American Animals, the British drama Apostasy, the British comedy Strangeways Here We Come and the American serial drama Paper Boys.
Posted by Rich Cline at 10:26 No comments:

Requisite Blog Photo: There's a fire within my soul 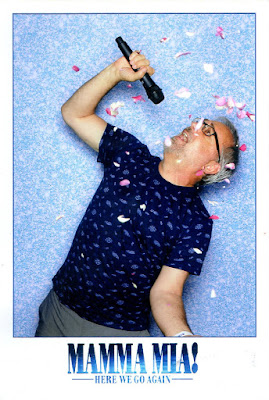 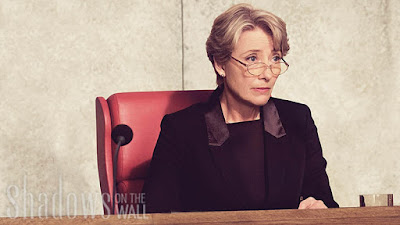 It's been a busy week, even if press screenings have been a little thin. The World Cup semifinal featuring England on Wednesday night erased all planned screenings that night. And Thursday was the summer party for the Critics' Circle - that was good fun. I'm the vice chair of the film section, so as one of the event hosts had to skip that evening's screening of Mission: Impossible - Fallout (I'll catch up on that in a week or so).

But I did see a few films. The Children Act stars Emma Thompson (above), who is simply devastating as a high court justice who gets caught up in a thorny case. Based on an Ian McEwan novel, it refreshingly refuses to simplify characters, plots or themes, and leaves us with a lot to think about. Conversely, Skyscraper is best watched with the brain disengaged: it's a preposterously stupid action thriller that's far too serious for its own good. Dwayne Johnson is, as usual, the best thing about it, but was clearly told to rein in his charm and wit.

Hearts Beat Loud is a moving, gorgeous drama starring Nick Offerman, Kiersey Clemons and Toni Collette. The story is interwoven with engaging, earthy songs, so it's involving even if it's a little over-crafted. And A Swingers Weekend is a loosely awkward comedy-drama about three couples trying to spark up their relationships at a lake house. The darker scenes are far more interesting than the rather tepid sexy silliness.

This coming week will be busy, with the all-star musical sequel Mamma Mia! Here We Go Again, Jodie Foster in Hotel Artemis, Glenn Close in The Wife, Denzel Washington in The Equalizer 2, Sylvester Stallone in Escape Plan 2, Jonathan Rhys Meyers in Damascus Cover, Oona Chaplin in Anchor and Hope, and the costume designer doc Love, Cecil.
Posted by Rich Cline at 13:37 No comments:

Critical Week: Over the borderline 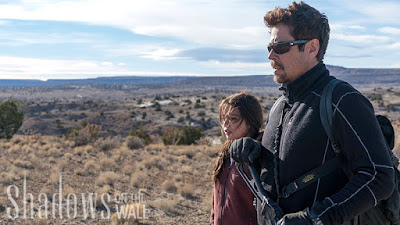 Back in London after a two-week break, I've been catching up on several films, including the sequel Sicario: Day of the Soldado (UK title Sicario 2: Soldado), a gritty and intensely gripping thriller following on from the more resonant first film. Josh Brolin, Benicio Del Toro and Isabel Moner are excellent. Tonal issues make the romcom Ideal Home surprisingly challenging - it feels like a gentle family film, but is packed with more provocative adult elements. Steve Coogan and Paul Rudd are superb at the centre. And Mary Shelley is a fascinating biopic about the author of Frankenstein, although it feels like it has smoothed out the real story. Elle Fanning is terrific in the title role.

A little further afield, My Life With James Dean is a gentle, wry French comedy about a filmmaker on a bizarre odyssey in a sleepy coastal town. It's artful, quirky and hilarious. And Postcards from the 48% is a solidly assembled doc digging into the issue of Brexit. It may be one-sided, but frankly there hasn't yet been a compelling argument in favour of leaving the EU, aside from emotional nationalism. Which makes the film seriously scary.

Coming up this week are screenings of the Dwayne Johnson action Skyscraper, Nick Offerman in Hearts Beat Loud, Emma Thompson in The Children Act, the comedy A Swingers Weekend and probably a few more as I continue to play catchup...
Posted by Rich Cline at 11:04 No comments: