The British Film Institute's 25th London Lesbian & Gay Film Festival kicks off tonight with a film (Gregg Araki's Kaboom with Thomas Dekker, above) and party as usual. But things are rather stripped-down from last year's 16-day series of daily star-studded screenings and parties. Due to budget cuts at the BFI, the festival is only six days long this year, and it's a much leaner affair in other ways: no delegate facilities, no travel allowances for filmmakers and, most startling, no travelling programme of festival films around the UK over the rest of the year. There's a lively Facebook campaign to save the LLGFF, which was the UK's third largest film festival after Edinburgh and London. Well, Edinburgh is also drastically truncated this year, and the BFI also runs London in October, so we'll see what happens then.

But back to the festivities at hand. Here are highlights from the first two days of the 25th LLGFF...

Kaboom (opening film)
dir Gregg Araki; with Thomas Dekker, Juno Temple 10/US ****
As this scruffy coming-of-age sex comedy turns into a horror movie, the combination is completely disarming. It's both silly and creepy, with honest subtext about youthful searching and the complexities of human sexuality... FULL REVIEW >


Mysterious Skin (special screening)
dir Gregg Araki; with Joseph Gordon-Levitt, Brady Corbet 04/US *****
Araki takes a huge leap forward with this deeply provocative and moving drama based on Scott Heim's novel. While maintaining his jerky editing style, he avoids his usual amateurishness and plays on his strengths. This film is lushly filmed and acted with raw beauty and subtlety even when the story gets seriously disturbing... FULL REVIEW >


L.A. Zombie
dir Bruce LaBruce; with Francois Sagat, Rocco Giovanni 10/US ***
LaBruce brings his usual eerie comical moodiness to this outrageously graphic tale of a lonely zombie in Los Angeles. So clearly it's a metaphor, right? Indeed, the film is impossible to categorise. And even though it's utterly in-your-face, we still somehow feel for this guy... FULL REVIEW >


Unhappy Birthday
dir Mark Harriott, Mike Matthews; with David Paisley, Christina De Vallee 10/UK ***
You have to give credit for the cast and crew for trying to create a gothic atmosphere in this low-budget British horror movie. It doesn't quite work, but it's still rather good fun to watch, if only for campy, creep-out vibe... FULL REVIEW >

dir Jean-Claude Schlim; with Layke Anderson, Benn Northover 09/Lux ***
Starting with the same plot as Burlesque, this ambitious film turns into a full-on Aids drama. And while it feels somewhat dated, as well as melodramatic, the filmmaking is intimate enough to keep us engaged with the characters... FULL REVIEW >

The big press screening in London last week was for Zack Snyder's hotly anticipated Sucker Punch, which instantly becomes the most disappointing film of the year. Not because of the high expectations as for the fact that the film is chaotic, nonsensical and fetishistic in its approach to women and action. Much more enjoyable was the animated comedy Rio, a colourful 3D romp that kept us laughing nonstop.

Off the beaten path, we had two independent British dramas: Blooded is a provocative thriller about anti-hunting activists that looks terrific even if it never really grabs hold; and Break My Fall is a scruffy, postmodern romance about two girls (it also marks my first on-screen credit, since I was an extra on the film set last summer). Foreign films featured two of the week's best performances, both by young children: the gripping South African drama Life Above All centres on a young girl trying desperately to maintain her family's dignity, while the artful Turkish drama Honey follows a young boy struggling to connect with his mother, society and nature.

This coming week we have the horror movies The Roommate and Rubber, the "don't ask, don't tell" drama A Marine Story, and a trio of documentaries: Becoming Chaz, about Chaz Bono's gender transition; The Oath, about a Guantanemo prisoner; and the acclaimed Danish war doc Armadillo. We also have the kick-off of the 25th BFI London Lesbian & Gay Film Festival, which has been stripped-down this year from 16 to 7 days due to budget cutbacks at the British Film Institute. I'll have daily highlights here.

Requisite Blog Photo: Blame it on the samba 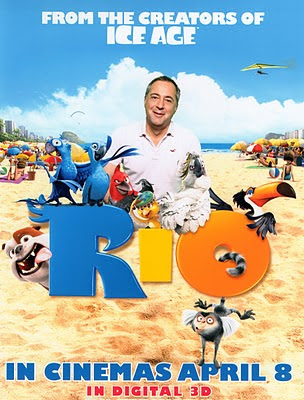 Two brainy movies screened for London critics last week, and while neither is quite Inception, at least they demonstrate that blockbusters don't have to be stupid. To follow up his astonishing debut Moon, director Duncan Jones goes big-time with Source Code, a crackling terrorism thriller with a Groundhog Day premise. The likeable Jake Gyllenhaal and especially good Vera Farmiga and Michelle Monahan help. The other is Limitless, about a brain-expanding drug, and it's also exhilarating good fun, with a terrific central performance from the even more likeable Bradley Cooper.

There were a few other high-profile films last week for us as well: we had a very late screening of Matthew McConaughey's enjoyably twisty legal thriller The Lincoln Lawyer; Tom McCarthy's latest engaging slice of real life in Win Win, starring Paul Giamatti; the goofy stoner fairy tale Your Highness, reuniting DannyMcBride and James Franco; and the genuinely scary horror film Insidious, with Rose Byrne and Patrick Wilson. Last week's kiddie movie was the enjoyably deranged Easter Bunny adventure Hop; the foreign film was the serene, doc-like Le Quattro Volte from Italy; and the documentary was the inspirational charity film A Small Act.

The big movie this coming week is Zack Snyder's girl-power fantasy Sucker Punch, and for the kids we have the 3D animated parrot adventure-comedy  Rio. Smaller indie films include the British thriller Blooded and the London romance Break My Fall. Foreign films include the South African drama Life Above All and the Berlinale-winning Turkish drama Honey (Bal).
Posted by Rich Cline at 12:39 No comments: 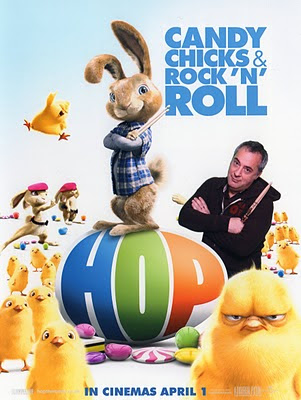 Channing Tatum and Jamie Bell fight and snarl and bond like mad in The Eagle, one of the more enjoyable movies we critics saw this past week. Despite the corny script, the actors make it extremely watchable. And then there were The Company Men, a sharply well-written and beautifully acted drama with Oscar-winners Ben Affleck, Tommy Lee Jones and Chris Cooper as victims of corporate downsizing. From Korea, we had a man on a brutal cat-and-mouse revenge mission in I Saw the Devil, a strikingly well made film designed to provoke some extreme reactions. From the Isle of Man, we had the  documentary Closer to the Edge, about the insane men who race in the life-threatening TT motorbike races. And from 1980s Germany we have the director's cut of the banned classic Taxi Zum Klo, about a school teacher with a lurid and not-quite-secret-enough gay life.
Meanwhile, women showed their manliness in the hit Aussie thriller Tomorrow, When the War Began, about a 17-year-old girl who leads her friends to resist foreign invaders in her home town, Red Dawn-style. Gwyneth Paltrow showed that female country stars can drink and carouse like any man (most notably Jeff Bridges) in the watchable but melodramatic Country Strong. And mothers drive the plot, and the Martian society, of the performance-capture adventure Mars Needs Moms, but they need boys to rescue them. And it might have been more fun as a live-action romp.

This coming week looks even more male-dominated, starting with Matthew McConaughey as guy who works in his car in The Lincoln Lawyer; Patrick Wilson in the haunted house/possessed child thriller Insidious; Jake Gyllenhaal in the sci-fi thriller Source Code, Duncan Jones' hotly anticipated follow-up to Moon; Bradley Cooper in in the brain-expanding drama Limitless; Paul Giamatti in Tom McCarthy's Win Win; the teen-boy Easter Bunny romp Hop; the medieval Italian shepherd drama Le Quattro Volte; and the Cannes-winning drama A Screaming Man, from Chad. Hey ladies, where are you?
Posted by Rich Cline at 10:40 No comments:

No, I haven't gone all retro: there's actually an all-new Winnie the Pooh movie coming to cinemas, and critics were, erm, treated to the now-requisite Sunday morning child-friendly press screening. There were an unusual number of under-5s at this one, the perfect audience for it. At the other end of the spectrum, we all rather enjoyed the raucous energy of Battle Los Angeles, a virtually script-free movie that has a lot of style.

I also took the opportunity to rewatch The Social Network on the flight to New York, to see if I'd missed something the first time. But I had the same reaction: it's excellent filmmaking and acting, plus a staggeringly relevant subject, but the film never grabs hold on any other level. Anyway, this coming week features the child-friendly morning screening of the Disney romp Mars Needs Moms, Ben Affleck in The Company Men, the Korean horror I Saw the Devil,  the 3D racing doc Closer to the Edge, the editor's cut of the notorious Taxi Zum Klo, and something called Tomorrow When the War Began.
Posted by Rich Cline at 09:25 No comments: