Greetings from the end of Day 1 at the 73rd Venice International Film Festival. This is my first time at this festival - and my first visit in Venice itself (although I was born in Venice, California, if that counts for anything). I'm staying here on the Lido, not far from the Palazzo, Casino and other rather fabulous venues, but my life consists of attending unglamorous press screenings and scrabbling around for food (there are no cafes nearby) and wifi (which seems like a luxury). Today's films included the festival opener, and I spotted Emma Stone on the red carpet...

La La Land
dir-scr Damien Chazelle; with Ryan Gosling, Emma Stone 16/US ****.
This colourful musical about Los Angeles is both a celebration and a cautionary tale about the city of dreams. Its buoyant tone and fizzy performances make it a joy from start to finish, even when things turn rather dark along the way. Writer-director Damien Chazelle proves that Whiplash was no fluke: this is a bravura display of pure cinematic joy.

The Light Between Oceans
dir-scr Derek Cianfrance; with Michael Fassbender, Alicia Vikander 16/NZ ***
Fans of sweeping romantic epics will enjoy this florid love story, its emotive performances and picturesque scenery. Those who find tortured melodrama just a touch exhausting will find it a bit of a chore to sit through. But it’s beautifully made and well-acted by a fine cast. An even if it doesn’t have much to say thematically, there’s at least some intriguing moral twistiness. (That's Vikander and Fassbender, above.)

Heartstone [Hjartasteinn]
dir-scr Gudmundur Arnar Gudmundsson; with Baldur Einarsson Blaer Hinriksson 16/Ice ***.,
Dark and sometimes very grim, this Icelandic teen drama tackles a serious topic in an intensely personal way. Set in a rural area, the small community ramps up the emotions to the breaking point, pulling the audience into the story with serious force.

I'll add to this blog as I get the chance, and upload reviews to the site when possible. Tomorrow's films are Denis Villeneuve's Arrival, Alice Lowe's Prevenge, Gabriele Muccino's L'Estate Addosso and the Filipino drama Pamilya Ordinaryo.

It's been a very busy week, screening-wise. Easily the best film, and one of my favourites of the year so far, was Kubo and the Two Strings, the animated adventure set in a mythical Japan. It's a stunning mix of stop-motion and live action, but the story and characters make it unmissable. The week's other animated offering was Seth Rogen's rude comedy Sausage Party, but the cinema had a power cut 10 minutes into the press screening, so I'll be unable to review it (some might say I had a lucky escape).

Back in live action, we had the all-star ensemble adult comedy Bad Moms, which is better than it looks. The story is silly, but the cast and script are hilarious. Anthropoid is a true story from WWII Prague told with a bracing attention to realistic detail, anchored by solid turns from Cillian Murphy and Jamie Dornan. Daniel Radcliffe plays a corpse in Swiss Army Man, a survivalist comedy also starring Paul Dano. It's perhap of the oddest movies of the year, but has a certain charm. Andy Samberg brings his ex-boyband sketch character to the big screen for the constantly funny pastiche doc Popstar: Never Stop Never Stopping. And the doc The Beatles: Eight Days a Week - The Touring Years takes a somewhat easy approach to the subject matter, but holds the audience with unseen footage, big personalities and great music.

But there was more! Genre films included Blair Witch, a 17-years-later sequel to the game-changing found footage hit. The rather nutty action thriller Kickboxer: Vengeance shifts Jean-Claude Van Damme to the mentor role for new Muay Thai expert Alain Moussi. The gentle British comedy ChickLit has some fun with the mummy porn phenomenon. The skilfully madeAustralian drama Downriver is deeply haunting, as is Pablo Trapero's stunning drama The Clan, about a real-life 1980s crime family in Buenos Aires. And then there's the Mexican shocker We Are the Flesh, an outrageously in-your-face post-apocalyptic freak-out. And Hell Town goes for more comical chills with its witty pastiche horror-soap TV format.

Diane Kruger and Bryan Cranston are terrific in The Infiltrator, based on the true story of federal agents infiltrating the Colombian drug trade in the mid-80s. And then there's Jonah Hill and Miles Teller getting involved in the illicit arms trade in War Dogs, a lively and too-violent comedy from the director of The Hangover. The week's other heavy hitter was also a true story, although it's from the 1860s. Free State of Jones is a long, important and perhaps too-earnest drama starring Matthew McConaughey as a southerner who rebelled against the Confederacy.

And then there was the British post-apocalyptic thriller The Girl With All the Gifts, a terrific premise with an excellent cast that includes Gemma Arterton, Glenn Close, Paddy Considine and talented newcomer Sennia Nanua. The third film in the series, The Purge: Election Year continues the rather anachronistic anti-violence preachiness alongside gratuitous grisly horror. 400 Days is an uneven low-fi thriller starring Brandon Routh and Caity Lotz as astronauts preparing to go to Mars but ending up somewhere entirely different. And Liebmann is an involving, offbeat German drama set in France, as a guy moves to a rural town to escape his past, but it of course catches up with him.

This coming week I have screenings of Kristen Stewart in Personal Shopper, the animated adventure Kubo and the Two Strings, the action mayhem of Kickboxer: Vengeance, the arthouse thriller Under the Shadow, the acclaimed festival film The Clan and the horror romp We Are the Flesh.
Posted by Rich Cline at 00:30 No comments:

Critical Week: I'm with the band

David Brent makes the jump from the BBC TV series The Office to the big screen for Life on the Road, the continuing mock-doc adventures of a man whose every word and action makes the audience squirm uncomfortably. It's sometimes funny, and has some unexpected emotion too. I caught up very late with both the DC Comics all-star supervillain action romp Suicide Squad and the Zac Efron-Adam Devine comedy Mike and Dave Need Wedding Dates - neither are very good, but they're probably just what their target audiences want. Jamie Dornan stars in the involving, creepy Hitchcockian thriller The 9th Life of Louis Drax. And the must-see documentary Tickled follows a New Zealand journalist down a jaw-dropping rabbit hole as he investigates a secret society. Or maybe it's something else entirely. 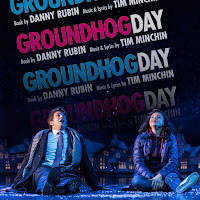 I also caught two stage productions over the weekend. Groundhog Day at the Old Vic is a new musical based on the 1993 comedy movie classic, with a book by the original screenwriter Danny Rubin and songs by the genius Tim Minchin. It's visually a bit too busy, but the story is told with jaw-dropping invention and energy, a passionate, seriously gifted cast and fantastic music. It's also funny and surprising, and it carries a powerful emotional and thematic kick at the end. • A much smaller production, The Past is a Tattooed Sailor is on at the Old Red Lion Theatre. It's a story of a 20-something orphan exploring his past through his great-uncle's celebrity-filled anecdotes plus a few ghosts wandering around the family's country manor. It's a bit fragmented, with lots of short, sharp scenes that rely on brainy dialog. But it's darkly fascinating and ends up thoughtfully provocative.

Among the films coming up this next week, we have screenings of Jonah Hill and Miles Teller in War Dogs, Bryan Cranston in The Infiltrator, Gemma Arterton in The Girl With All the Gifts, and the doc In Pursuit of Silence.
Posted by Rich Cline at 10:45 No comments:

Aside from taking a few days off from moviegoing to spend some time with friends in Berlin, this past week has been all about the undersea menace! I had two shark-attack romps, from very different ends of the cinematic spectrum. First there was The Shallows, a taut, cleverly constructed thriller in which Blake Lively is stalked by a great white on a beach in Mexico. And then there was Sharknado: The 4th Awakens, easily the worst in a pretty terrible series. The biggest mystery is why, with the additional cash and (ahem!) filmmaking experience, this is such a complete and utter mess. Still, it has some great gags, and Ian Ziering and Tara Reid continue to approach the nonsense with hilariously straight faces.

Higher quality cinema came courtesy of Brian Cox in The Carer. As a raging thespian, Cox is on terrific scene-chomping form, and the film's refreshingly low-key approach makes it funny, warm and even provocative. There was also the documentary Can We Take a Joke? in which a bunch of stand-up comics discuss how they see society slipping away from free speech because everyone is always offended about everything. It's a strikingly important little film.

Coming up this next week, I'll catch a very late screening of the barely screened supervillain blockbuster Suicide Squad, Ricky Gervais' spin-off David Brent: Life on the Road, the horror sequel The Purge: Election Year, Jamie Dornan in The 9th Life of Louis Drax, the German drama Liebmann and the secret-society doc Tickled.
Posted by Rich Cline at 17:04 No comments: