Critical Week: Off the grid

London critics had a chance to catch up this week with the pointed drama Captain Fantastic, starring Viggo Mortensen as a father raising his six kids out in the forest with a very well-rounded education. It's packed with great ideas, and has terrific performances from Mortensen and George MacKay as his eldest son.

Also this week, Matt Damon was back as Jason Bourne, reuniting with Paul Greengrass for another ripping espionage thriller. Chris Pine, Jeff Bridges and Ben Foster all get great roles in the present-day Western Hell or High Water, a riveting exploration of the modern world with plenty of added suspense. There was also a new movie version of the children's' classic novel Swallows and Amazons, with the excellent Kelly Macdonald, Rafe Spall and Andrew Scott in the cast, but little in the way of tension. And the TV series Looking concluded with a movie that continued creator Andrew Haigh's refusal to play into stereotypes in his exploration of the intertwined lives of three gay men in San Francisco, beautifully played by Jonathan Groff, Murray Bartlett and Frankie Alvarez.

I have no screenings in the diary for the coming week, because I am heading out of London on holiday. It will be my first time out of England since last November - a well earned break, I think! So I intend to see no movies, although I may preload a couple on my phone for the flights, such as Brian Cox in The Carer and the gritty teen romance Black. But I need a screen break...
Posted by Rich Cline at 00:45 No comments:

Requisite Blog Photo: On an adventure 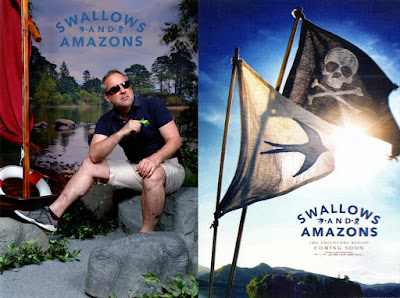 Off the beaten path, we had screenings of Things to Come, a clever, thoughtful French drama starring Isabelle Huppert; the moving documentary Jim: The James Foley Story, about the American journalist kidnapped and executed by Islamic State; and the artful portmanteau movie Confessions, exploring issues of love and sex through rather actorly monologs.

This coming week I have rescheduled screenings for both Jason Bourne and Hell or High Water, plus that other Chris Pine movie Star Trek Beyond, Viggo Mortensen in Captain Fantastic and the new film version of the British classic Swallows and Amazons. Then I'm off on a short holiday for five days, hurrah! My first proper break since last November.
Posted by Rich Cline at 21:53 No comments:

Shadows on the Stage: Revenge or redemption

Staged in Southwark Playhouse's Little Theatre, this remarkable play immerses the audience in a topic we feel we understand already. But scene after scene flips the issues on their head, forcing us to a deeper understanding. It's a powerful and important drama, beautifully staged. 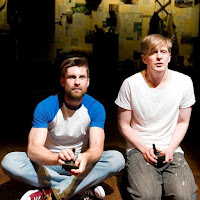 Based on the real experiences of writer David Holthouse, the show hinges on a demanding performance from actor Gerard McCarthy, who plays David from age 7 to his early 30s. The show opens with him narrating the events as an adult who has decided to kill the man who raped him 25 years earlier. Then we flash back, as young David is with his parents (Barber and Towers) at a dinner party with their friends (Van Nostrand and Moratis), whose 14-year-old sporting star son (Evans) teases David in the basement before launching his assault.

The performances are of course rather heightened, with grown men playing young boys, but that somehow makes the whole thing even more chilling, especially as they get older and we can still see their childlike insecurities. Evans and McCarthy (pictured) are superb at every stage, and their later confrontations are both gripping and wrenchingly emotional.

Director Potter stages this in the round, with the set surrounding the audience. Actors emerge from the seats to play their scenes before disappearing back into the crowd. It's a clever touch that makes a point, and the script maintains this kind of subtle complexity at every turn, upending expectations and challenging accepted wisdom.

The story hinges around David's urgent cry: "Why should I be scared? He's the one who should be scared!" So without overtly saying it, the play becomes a powerful, riveting exploration of feelings the entire audience shares about the state of the world today. This also makes the characters' complex mix of anger and compassion increasingly urgent.
Posted by Rich Cline at 22:06 No comments: 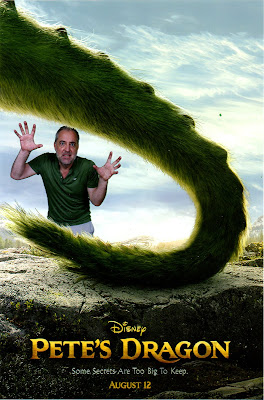 This past week, I caught up with Elle Fanning in Nicolas Winding Refn's new horror drama The Neon Demon, the latest slick, lurid, fascinating, infuriating film from the Danish filmmaker. Another stylish thriller, Nerve, stars Emma Roberts and Dave Franco (sorry, comments are embargoed). And then there was some comedy: Ghostbusters entertainingly reboots the franchise with a terrific quartet of comedic actresses, while Ice Age: Collision Course carries on the ridiculous antics of that growing herd of loveable but random prehistoric critters.

Further afield, Pedro Almodovar's Julieta is a fluid, beautifully emotive drama with a twisty story and a terrific cast. The acclaimed Greek comedy-drama Chevalier is a fiercely clever dissection of masculine bravado. K-Shop is a solidly made British horror thriller with blackly comical overtones. And the latest collection from Peccadillo, Boys on Film 15: Time & Tied, features nine strikingly well-made short films addressing issues of gender and sexuality from a variety of astute, personal angles. 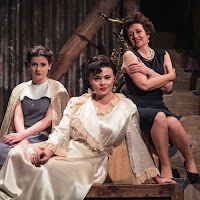 This inventive new play weaves together three periods in Judy Garland's life to tell her story. It's superbly written and directed, with a very strong cast. The three lead actresses are excellent, evoking the star rather than mimicking her. Penrose is the most magnetic as the teenage Judy in the late 1930s, being pushed into showbiz by her mother (Bailey). The buoyant Wollaston plays her at 29, on the eve of her 1951 comeback concert in New York, with some steamy support from her manager Sid Luft (Anton). And she's played at 41 by the edgy, kinetic Sheals, straining against the TV network as she makes her 1963 variety show. The three periods seamlessly weave amongst each other, allowing the Judys to sing together on a series of her most iconic songs, clearly building to a goosebump-inducing rendition of Over the Rainbow.
Barbu: Cirque Alfonse
dir Alain Francoeur
with Antoine Carabinier Lepine, Jonathan Casaubon, Jean-Phillippe Cuerrier, Genevieve Gaulthier, Licas Jolly, Genevieve Morin, Francis Roberge, Milette Jolly
Wonderground, Southbank • 15.Jun-25.Sep.16 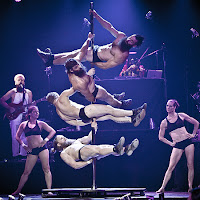 Energetic and very sexy, this riotous old-style circus centres on a team of muscle men who engage in a series of acrobatic stunts that are genuinely jaw-dropping. They throw each other into the air with abandon, and are accompanied by three women who are equally tough (and a lot more bendy). Each act is cleverly designed to build to a big climax, often with some tongue-in-cheek innuendo, sometimes including a spot of nudity. And it's the warm bond between these hairy men in tiny speedos that makes the show thoroughly involving for the audience. Meanwhile, the clownish old man in the group finds his own resonance amid the physical outrageousness. A lot of fun.
Savage
dir-scr Claudio Macor
with Alexander Huetson, Gary Fannin, Nic Kyle, Lee Knight, Bradley Clarkson, Emily Lynne, Christopher Hines, Kristian Simeonov
Arts Theatre West End, London • 29.Jun-23.Jul.16 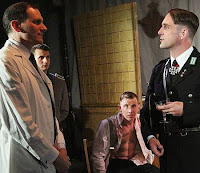 It's perhaps not so surprising that this true story has never been told before: it's about a Danish doctor who performed horrific experiments in Nazi concentration camps, but was able to escape justice with the help of British diplomats. Set in 1940 Copenhagen, the play centres on young artist Nikolai (Huetson) and his boyfriend Zack (Kyle), an American stationed at the embassy. Homosexuality was legal in Denmark at the time, but the occupying Nazis had other ideas, arresting Nikolai and handing him over to Dr Carl Værnet (Fannin) for a brutal treatment to "cure" him. Writer-director Macor cleverly combines the real events with various strands of drama, finding hope and love even in a terrifying situation. It's a bold approach that would perhaps play better on a larger stage. The tiny Above the Arts space gets rather crowded, obscuring the solid work of the cast. Fannin is the standout, adding texture to his villainous character, while Clarkson is riveting as the conflicted SS general in charge. And Huetson and Kyle beautifully provide a strongly emotional centre to the story.

Critical Week(s): With a little help from my friends

I'm catching up on two weeks of film-watching here, since I took last week to write about theatre and TV instead, and also because screenings have been rather thin. There were two big sequels shown to UK critics: Finding Dory is an enjoyably colourful and slightly less satisfying follow-up to Disney/Pixar's 2003 hit, while Now You See Me 2 is an entertaining and somewhat convoluted continuation of the 2013 heist thriller about magicians.

And then there are the pre-established properties: Absolutely Fabulous: The Movie brings the beloved sitcom characters to the big screen more than 20 years after they first appeared for a film that's better than anyone expected. And The Legend of Tarzan is an odd hybrid of a sweeping period epic and a silly action blockbuster, with an unusually strong cast. As for original stories, Ira Sach's Little Men is an exquisitely observed family drama, and Thomas Vinterberg's The Commune is a complex look at relationships in 1970s Denmark. I also caught up with the seriously stunning, unmissable Italian immigration doc Fire at Sea and the offbeat, segmented arthouse drama Like Cattle Towards Glow, exploring the link between lust, love and violence.